Ashok Gehlot ultimately had his way as the Congress sacked Sachin Pilot as PCC chief and deputy chief minister, along with two other rebel ministers.

Rajasthan Chief Minister Ashok Gehlot ultimately had his way as the Congress sacked Sachin Pilot as PCC chief and deputy chief minister, along with two other rebel ministers, Vishvendra Singh and Ramesh Meena. Gehlot said it was a sad decision but Pilot was conniving with BJP to break the party. Gehlot was also upset with the two ministers whom he accused of indiscipline. 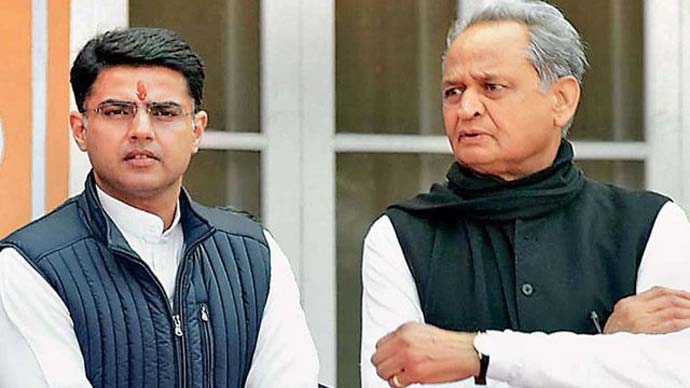 The Congress removed Mukesh Bhakjar as Youth Congress president of Rajasthan and Rakesh Pareekh as Sewa Dal chief. In an instant move, Govind Singh Dotasara, the education minister close to Pilot, was made PCC Chief, Ganesh Ghoghra was made the head of the Youth Congress, and Hem Singh Shekhawat the Sewa dal chief.

The party took the decision after its legislature meeting had 102 MLAs, which showed Gehlot has a majority in the 200 member house. Gehlot will gradually take a call on his cabinet expansion. Vishvendra Singh denied any indiscipline and said all he wanted was to attract the attention of high command on the poor performance of the government. Meena said he had only been trying to take up the problems of the SC/STs. But the fact is that these two, along with others, have sided with Pilot, who claimed he has brought the party to a minority and refused to Dharmendra Rathore, CM Gehlot’s aide attend party meets twice. Gehlot has an upper hand and some of the Pilot camp MLAs will return to Gehlot's fold. But it should be clear, Gehlot tolerates no-nonsense and he was tired of the consistent defiance by dissidents. He is likely to expand his cabinet soon.

Also read: Why Pilot’s moves may cause turbulence

Post your comment
#Rajasthan, #Congress feud, #Ashok Gehlot, #Sachinpilot
The views and opinions expressed in this article are those of the authors and do not necessarily reflect the official policy or position of DailyO.in or the India Today Group. The writers are solely responsible for any claims arising out of the contents of this article.