Ahead of election, Raje is offering herself to public audit.

There has been an unusual voting pattern in the bypolls in Rajasthan during the past four years.

After the Vasundhara Raje-led Rajasthan BJP swept the Assembly in December 2013 and general elections in June 2014, with a pro-Narendra Modi wave helping expand victory margins, the party lost three out of four by-polls in September on the vacancies created by the resignation of four MLAs who had contested and won from parliamentary seats.

Again, Raje was victorious in the bypolls in Dholpur in April 2017, winning against every odd before losing the by-elections to two parliamentary and one Assembly seat in polls held in January 2018, which alerted the party to a likely defeat in Assembly polls that are scheduled in December.

So, what has been causing such a wide fluctuation in the choice of voters in such a quick span, for example, handing over defeat within two months of granting extraordinary run of victories in June 2014?

Within the cadre of the BJP and the RSS in the state, this is attributed to a strategy of reining in Raje, to make her listen to the high command and the RSS.

But instead of delivering a one-off shock to a chief minister, the only in the party to stand up to Modi and party president Amit Shah and with no alternative to her in the state, this strategy has backfired. 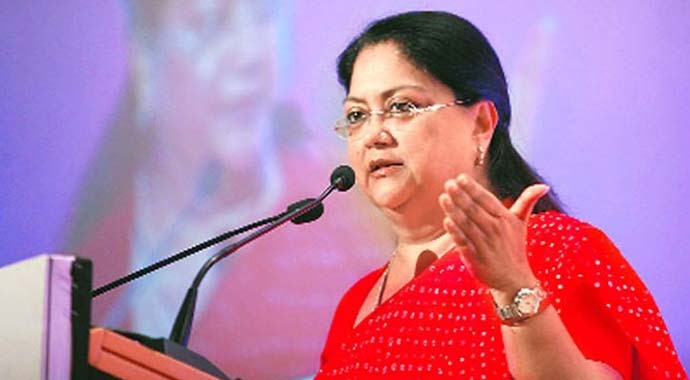 Raje has been holding rallies to prove that she has done a lot for everyone. (Photo: India Today)

It has only fuelled anti-incumbency against its own government indicated by pre-poll surveys.

Realising this, the BJP high command, Raje and the rival Congress have now made performance of the government core to their election strategy.

So, the BJP government of Raje has been organising a series of meetings largely attended by beneficiaries of the government and putting across a united face.

In the first one, Modi backed Raje for the successful implementation of central and state schemes at a rally attended by over a lakh of beneficiaries of various schemes in Jaipur on July 7.

Thereafter, she has been holding rallies of other beneficiaries to prove that she has done a lot for everyone.

About 40,000 teachers recruited during her regime attended the rally in Jaipur, as did 6,000 constables who got promotions in one go as she declared before them and their family members that none will retire as a constable anymore in the state.

The party will soon hold a farmers’ rally as she has waived loans up to Rs 50,000 for them and there are as many as thirty lakh beneficiaries. And there are 25 thousand beneficiaries of her loan waiver for scheduled castes and scheduled tribes.

Raje has focussed more on the rural sector during her rule and even her 40-day yatra, which Shah flagged on August 4, is largely through rural areas to convince people she has delivered on her promises, even if people are unaware about it.

So, Raje is offering herself to a public audit.

She calls either local MLAs or collectors on the dais and asks them to confirm whether each of the three-dozen works she talks of has been completed or not.

Then she asks the gathering if they have any doubts about her claims.

Rarely does anyone question her, but she confidently goes on, calling a few persons to reveal how many benefits they have received. It could be their daughters getting up to Rs 50,000 in a series of incentives linked to vaccinations and graduating to higher classes in school. Or, 17-year-old Mustqeen in Tijara in Alwar district who got a free heart surgery that lasted 24 hours and a 13-day admission in a private hospital.

While the state government’s loan waiver to farmers has made them happy, Modi’s raising the minimum support price of wheat from Rs 1,200 to Rs 1,800 has not been implemented for want of resources.

Tara Chand, an OBC farmer from Shahjehanpur, points it out.

He adds Muslims have turned away from the BJP altogether as a fallout of lynching over cows around this area. The BJP has shown a decline in its base among urban voters which is largely due to the impact of recession and inflation of fuel prices for which Modi’s economic policies are to be blamed and the state government ignoring towns in development of infrastructure.

Also Read: Free flow of freebies: Vasundhara Raje announces free smartphones. Others are not far behind

Post your comment
#Congress, #Sachin Pilot, #Vasundhara Raje, #Rajasthan Assembly polls
The views and opinions expressed in this article are those of the authors and do not necessarily reflect the official policy or position of DailyO.in or the India Today Group. The writers are solely responsible for any claims arising out of the contents of this article.