For the families of 13 others who died along with the former PM, any discussion about the release of the convicts rips open their wounds.

D Vedavalli vividly remembers the fateful night when former Prime Minister Rajiv Gandhi was assassinated in the sleepy town of Sriperumbudur on May 21, 1991. Her husband J Dharman, special branch head constable in the Manimangalam police station, was assigned the duty of taking notes during the election rally.

The couple used to live close to the venue of the election rally. As Vedavalli retired to bed, she woke up to a loud noise little after 10pm. At first, she assumed it to be the bursting of crackers at the rally venue. Soon, she heard a commotion outside, but couldn't make sense of it. May 21, 1991: Rajiv Gandhi at the Sriperumbudur rally. The LTTE suicide bomber Dhanu is encircled in red. (Credit: IndiaToday.in)

It was only at 6am the next day that she realised her world had been ripped to shreds by that loud bang, when policemen arrived at her doorsteps with the news of her husband’s death.

With three young children to take care of, Vedavalli's struggle had only just begun.

Two years later, she was given a job in the police department on compassionate grounds. “My kids grew up without a father. They had no mentor. No one came forward to help us. We were on our own. As a young mother, I struggled to raise my kids and provide basic necessities for the family," says Vedavalli.

Now, with the news of the AIADMK government in Tamil Nadu recommending the release of all seven convicts in the case, Vedavalli's wounds have been reopened.

"There will be no justice if they are released," she adds. 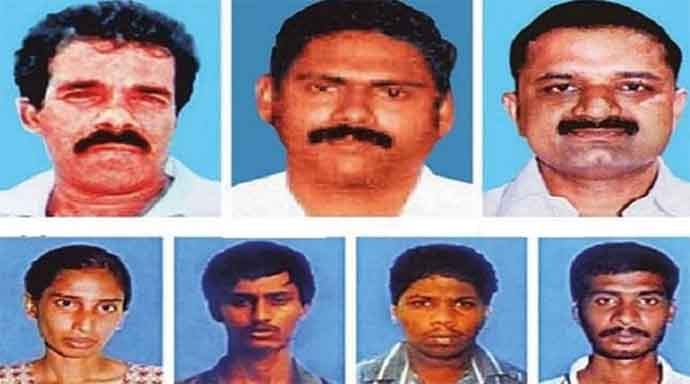 The convicts in the Rajiv Gandhi assassination case. (Credit: Twitter)

Vedavalli is not the only one who feels betrayed.

His elder brother was opposed to their widowed mother travelling alone so far. But a staunch loyalist of the Gandhi family, Begum went to attend the election rally.

As the district president of South Chennai Mahila Congress, Begum welcomed Rajiv Gandhi with a shawl. She was standing near him when the blast occurred. The family was shattered as they received their mother's dismembered body parts in a blood-stained blanket. For Begum’s seven children, the trauma of being orphaned at a young age left a permanent scar.

An angry Abbas questions the release of the convicts on humanitarian grounds.

“Their death sentence was commuted to life. Wasn't that humane enough? asks Abbas. “If it's about humanitarian values, then what about our sufferings? They should have been hanged long time ago, but they are still alive on humanitarian grounds," he adds.

Abbas further claims that while a few influential kin of victims and families of policemen got compensatory jobs and LPG distributorship, his family was ignored. Former President R Venkatraman helped the family of League Munnusamy, one of the victims, get an LPG distribution license. (Credit: PTI file)

The family members have written to Governor Purohit, seeking an appointment to discuss the issue and urge him not to give consent for the release of the convicts. Many of them feel it would set a dangerous precedent and is against the interests of the nation.

“Along with Rajiv Gandhi, 13 more people were killed. Rajiv Gandhi’s family might have pardoned them, but shouldn’t our views too be heard?” asks League Mohan, son of League Munusamy, ex-member of the Tamil Nadu Legislative Council who was present at the venue.

A freedom fighter, Munusamy was in charge of taking care of the arrangements at the venue and was seated in the front row when the blast occurred. He was 64 years when he died. Munusamy’s close association with former President R Venkatraman helped the family get an LPG distribution license. However, Mohan says the Congress party did not recognise their sacrifice.

For these 13 families, any discussion about the release of the convicts rips open their wounds.

There is a distant look in John Joseph's eyes as he recalls his elder brother Edward Joseph, a police inspector.

Edward was part of the security cover for the former Prime Minister. As John rummages through photographs of his elder brother, he slams political parties for propping up the release of convicts for political mileage.

"The families of the victims have suffered a lot — but the authorities have been always been indifferent to our pain. The politicians do not care for us. My sister-in-law has given up on trying to get assistance from the government," he sighs. Kin of the 13 victims feel it was not alone Rajiv Gandhi's family that suffered irreparable loss on May 21, 1991. (Credit: PTI file)

Edward was 39 when he was killed. He was with the Special Branch of the CID and was the personal security officer to former Chief Minister MG Ramachandran.

An honest officer, he had won many laurels in the department. He is survived by his wife, who is a teacher, and two daughters, who were nine and seven years at the time.

Anusuya Daisy Ernest, a retired police officer, was one of the lucky few who survived the attack. Daisy had attempted to stop Dhanu, the assassin from approaching Rajiv Gandhi moments before the blast occurred.

Twenty-seven years later, she is rattled by the government’s decision.

A sub-inspector, Ernest suffered grievous injuries and was operated on several times to get pellets removed from her body. "I was in the hospital for three months. Two of my fingers in the left hand had to be amputated. The road to recovery has not been easy. Families of policemen suffer till date due to the ghastly incident."

"It is an act of terrorism. The convicts deserve no mercy," she adds.

Also read: Three reasons why I think the ‘assassins of Rajiv Gandhi’ should never be freed

Post your comment
#Supreme Court, #Sriperumbudur, #Rajiv gandhi killers, #Rajiv gandhi assassination
The views and opinions expressed in this article are those of the authors and do not necessarily reflect the official policy or position of DailyO.in or the India Today Group. The writers are solely responsible for any claims arising out of the contents of this article.