This article has been co-authored by Amitabh Tiwari and Subhash Chandra.

Fifty five MPs of the Rajya Sabha are retiring next month and elections for these seats along with two vacant seats are slated to take place on June 11. The BJP's victory in Assam, Congress' loss in Assam and Kerala and victory of Mamata Banerjee and Jayalalithaa have raised hopes that the strength of the BJP and pro-BJP parties in the Rajya Sabha will increase, enabling the Narendra Modi government to pass important legislations like the Goods and Services Tax (GST).

The Rajya Sabha, where the Congress is in majority, has witnessed acrimonious scenes since Modi took over as the prime minister and its productivity has been lower than that of the Lok Sabha where the BJP is in majority. For example, in the budget session of 2016, the Lok Sabha recorded a productivity of 121 per cent as opposed to 91 per cent for the Rajya Sabha (Source: www.prsindia.org).

Fifteen states would be electing new members to the Rajya Sabha in June, though three of the four states that saw Assembly elections in April-May (Assam, Kerala and West Bengal) won't be a part of the exrcise. Uttar Pradesh (11 seats), Tamil Nadu and Maharashtra (six each), Bihar (five), Andhra Pradesh, Karnataka and Rajasthan (four each) are the prominent states which are going to elect new Rajya Sabha members in June. Out of the members retiring, the majority belong to the BJP (15), Congress (13) and BSP (six). 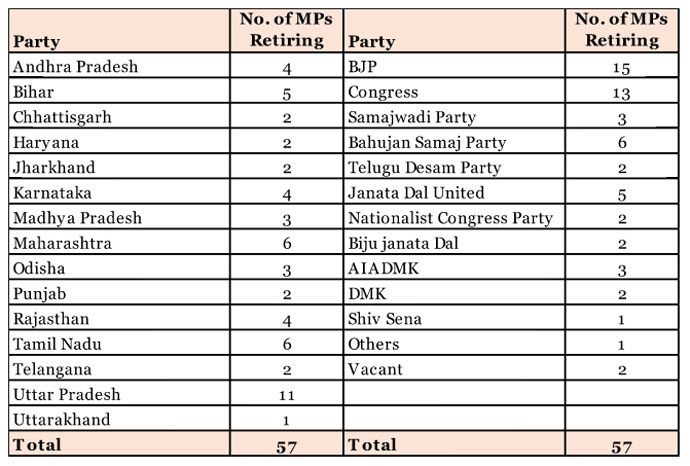 Simply put, to win a Rajya Sabha seat, a candidate should get a required number of votes. That number (quotient) is found using the following formula:

Since the SP has 224 MLAs, it can win six seats easily. If the 15 other/independent MLAs vote for SP candidates, they can win seven (assuming there is no cross-voting). The BSP can win two seats. The BJP can also win a seat. The Congress can retain one seat with the help of the RLD. Rajya Sabha elections have witnessed significant cross-voting and there could be a few surprises in all the states.

The Congress is currently the largest party in the Rajya Sabha having 64 members. It is likely to lose both its seats in Andhra Pradesh, one in Jharkhand and one each in Telangana and Uttar Pradesh. It is likely to snatch a seat currently held by the BJP in Uttarakhand. That's why Congress leader Anand Sharma has shifted from Rajasthan to Uttarakhand owing to the dismal performance of the Congress in the Rajasthan Assembly polls in 2013. Out of its 13 seats that the Congress will vacate with its members retiring, it is likely to be re-elected to only nine, bringing its tally down to 60. The BJP, the second largest party with 49 members, has 15 members retiring. It is likely to gain a seat each in Bihar and Jharkhand, two seats each in Maharashtra and Rajasthan while losing one seat each in Karnataka and Uttarakhand. This is likely to improve the tally of the BJP to 53. 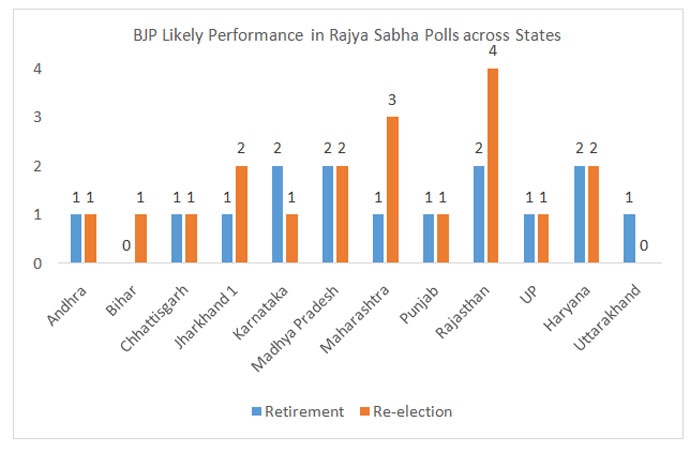 The biggest losers are expected to be the JD(U) and BSP losing three and two seats respectively. Re-elections to only ten seats are due in 2017 - Gujarat (three), West Bengal (six) and Goa (one). Status quo is likely to be maintained in these states except a gain of one seat to the Trinamool Congress (TMC) and the likelihood of CPI(M) general secretary Sitaram Yechury losing his seat and shifting to Kerala. This means the Congress will continue to be the number one party in the Upper House till 2017 (60) followed by the BJP at 53. There are some articles which are mentioning that if not the BJP all by itself, the NDA is likely to exceed the UPA tally after these polls. In our opinion, the UPA will continue to lead the NDA in the Rajya Sabha, 81 to 74. The analysts predicting the NDA going past the UPA are probably not including the JD(U) as part of the UPA.

The Congress is part of the JD(U)-RJD-led alliance in Bihar and hence the JD(U) should be considered as part of the UPA. The NDA and UPA are not very formal bodies and have loose structures in which parties join and leave at will. Anyway, what is more important is how many members are in favour or against the BJP in the Upper House.

As of now, there are 127 members who are anti-BJP consisting of MPs from the Congress, JD(U), BSP, SP, DMK, NCP and others. With elections due in Uttar Pradesh, the SP and BSP would not risk siding with the BJP as it would hamper their chances in the Assembly polls. Sixty-seven members support the BJP while a large chunk of the members - 47 of them - maintain a neutral non-BJP non-Congress stance (AIADMK, TMC, BJD, TRS, Independent and Others and the nominated members).

After the June elections to the Rajya Sabha, the numbers are expected to change to 119-74-50. In theory, the BJP, with the help of neutral parties and nominated members, can pass bills requiring a simple majority, though things won't be that easy. The BJP now depends upon the support of the charismatic, yet unpredictable Mamata and Jayalalithaa to pass important bills.

The Congress, by aligning with Left in West Bengal, has literally pushed Mamata towards the BJP and she has already announced support for the GST Bill. However, her followers and some other anti-Modi forces see in her a potential formidable prime ministerial candidate to take on the BJP in 2019. This factor, along with her massive support base among the Muslims, would stop her from going all out in support of the BJP in the Upper House.

Jayalalithaa, similarly, has snubbed the BJP time and again refusing an alliance in Tamil Nadu. The AIADMK was the only party to project her as a prime ministerial candidate against Modi in 2014. She too nurses prime ministerial ambitions and will want to explore options of leading such a front. There is no alternative then for the BJP to building consensus and reaching out to regional parties to elicit their support. Strong-arm tactics and incidents like Arunachal Pradesh/ Uttarakhand won't help its cause.

GST: A political game of chess

According to the PRS bill track, there are seven bills that have been passed by the Lok Sabha but not the Rajya Sabha. Amongst these are the crucial Land Acquisition and the GST Bills. It is unlikely that the government will push the Land Acquisition Bill anytime soon given the resistance and the likely risk of losing out on the rural vote.

The GST requires a two-third majority in the Rajya Sabha to be passed (162/243) and this looks a daunting task. The Congress is unwilling to support the Bill in its current format.

One of the unsaid points in political circles is that the Congress fears that the GST Bill will tremendously help GDP growth sinking its chances in 2019. On the other hand, the BJP fears that passing the GST Bill has tremendous risks particularly in the first two years (increased costs to both businesses and consumers) which might erode its current advantages.

As they learnt from the Vajpayee regime, excellent growth in the final year may not be adequate to stave off anti-incumbency. Further, while the National Council of Applied Economic Research (NCAER) study suggested a gain of 0.5-1.5 per cent after the GST is implemented, many others have pointed out that the real growth benefit might be even lesser.

In other words, both parties do not have much to gain from passing the Bill. However, the Congress tends to lose out if the Bill is not passed. Numerous surveys show that the Congress is seen as a barrier to the Modi government's ability to perform well and this impacts the urban and semi-urban voters. The BJP, on the other hand, gains by showing the Congress as obstructionist.

In this context, we believe that the Congress is likely to support the Bill after the Uttar Pradesh elections in 2017. The time to implement will probably coincide with the general elections in 2019 increasing the risk on the BJP.

Secondly, the numerical advantage of the Congress will continue to diminish in 2018 making it difficult for it to play spoilsport beyond a point. The BJP itself would find the time convenient because it could then time the roll-out to May 2019 after the Lok Sabha polls instead of rolling it out immediately in 2017.

Therefore, the absence or presence of a majority is more to do with the politics and positioning for the general elections in 2019 and less to do with legitimate concerns around bills. Both the large parties are attempting to press home an advantage with these pending bills. We believe that as far as the GST is concerned, it becomes viable to pass after March 2017 (Uttar Pradesh polls) when it is a win-win situation for both parties.

Meanwhile, the Rajya Sabha will witness serious political posturing and passing of less serious bills that has no negative impact on either party.

#BJP, #Congress, #GST Bill, #Rajya Sabha
The views and opinions expressed in this article are those of the authors and do not necessarily reflect the official policy or position of DailyO.in or the India Today Group. The writers are solely responsible for any claims arising out of the contents of this article.