By endorsing Ram Nath Kovind as President, Nitish Kumar has left Lalu Yadav and Opposition on their toes

Political sources in Patna see Bihar CM's decision to back BJP's choice as an expression of his growing despair.

Questions have been raised over the continuance of the Grand Alliance government in Bihar after Nitish Kumar surprised everyone by backing BJP nominee Ram Nath Kovind for President, causing severe heartburns to his alliance partner and RJD boss, Lalu Prasad, who even termed Bihar CM’s decision as a “historical blunder”.

There may not be any immediate threat to the government in Bihar, but it is subject to Lalu Prasad’s ability to lie low. “Nitish Kumar clearly has an independent mind. He cannot be bogged down by what the alliance partner wants him to do. He cannot be pushed beyond a point either,” says a senior JD(U) leader in Patna.

But why has Nitish Kumar — having earlier spoken about “Opposition unity” and forging a joint strategy for the presidential polls — changed his stand? Is Kumar on his way back to the NDA camp? Or, is the hype over his backing a BJP candidate worth it? The JD(U) support to NDA nominee for President, as party chief general secretary KC Tyagi described, can be seen as Nitish Kumar’s reciprocation to Kovind’s impartial and dignified stint as Bihar governor.

As a man of integrity and honour, Nitish Kumar appears to have only reciprocated the goodwill. But, is this as simple? Top political sources in Patna see Kumar’s decision as an expression of his growing despair in the Congress-led opposition. In April, when Nitish Kumar met Congress chief Sonia Gandhi, he reportedly advised her to set a secular agenda instead of reacting to everything that Narendra Modi does or says.

It was seen as Nitish Kumar’s last effort to inject a new strategic purpose into the opposition’s thinking veins. If Nitish Kumar had to pull out of the UP polls — where he had fiercely campaigned ahead of the Assembly polls to take his party beyond Bihar — it was largely because the Congress did nothing to accommodate the JD(U) in its Uttar Pradesh alliance. 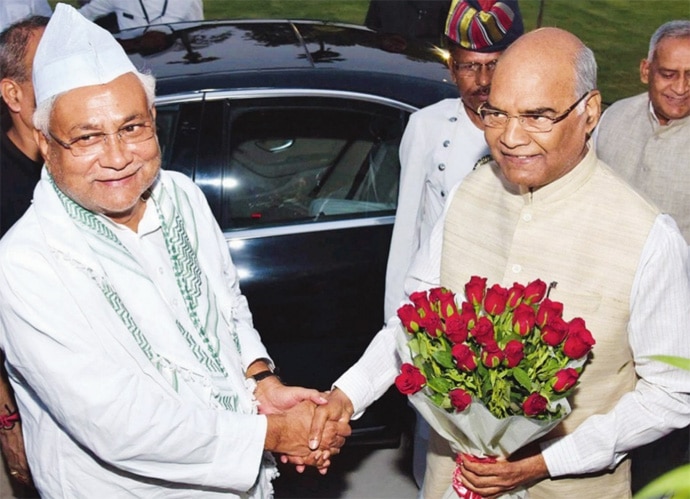 Earlier, it was Nitish Kumar who made Lalu Prasad cede many seats to let a non-existent Congress contest as many as 40 Assembly seats in Bihar Assembly polls. The Congress had won 27 of those seats. Nitish Kumar expected the Congress to reciprocate for the UP polls but the grand old party spurned him.

As the Congress allied with the Samajwadi Party and Nitish Kumar’s other alliance partner —Lalu Prasad — campaigned for them in UP, the JD(U) was made to appear unwanted and left out.

Also, Nitish Kumar, a man with a sharp political sense, has quickly understood that the Congress is not only too weak to lead its alliance partners, but also lacks the vision to set agenda. Worse, regional chieftains like Mamata Banerjee and Mulayam Singh Yadav are both unpredictable and untrustworthy.

The impact of this realisation was visible when Nitish skipped Sonia Gandhi’s lunch which she hosted on May 26, where leaders of 16 parties discussed the possibility of a joint candidate for President. But the meeting failed to come out with any names.

Beyond the immediate reasons, Nitish Kumar also has a penchant for taking independent decisions on issues. Much to the chagrin of the BJP top brass, Nitish had backed Congress nominee Pranab Mukherjee as the presidential candidate in 2012, though he was then part of the NDA.

He had also lauded then Prime Minister Manmohan Singh for his “economic wisdom and personal integrity” while staying in the NDA. Similarly, Nitish has backed Modi’s demonetisation and surgical strike against Pakistan last year.

So, what about the Grand Alliance government at a time when the BJP looks eager to back Nitish Kumar? The writing on the wall is not entirely legible, but seeing the alacrity with which the Bihar CM met Kovind hours after Amit Shah declared the NDA’s candidature for President — and then got the JD(U) to officially endorse him — a day before the meeting of Opposition parties to decide on their choice for the post — nothing seems impossible.

#BJP, #Congress, #Nitish Kumar, #Bihar
The views and opinions expressed in this article are those of the authors and do not necessarily reflect the official policy or position of DailyO.in or the India Today Group. The writers are solely responsible for any claims arising out of the contents of this article.