The saffron party's recent win in the communist stronghold of Tripura, a Bengali majority state, has added to Mamata Banerjee's headache.

Ram Navami celebrations turned out to be fiercely political than religious across West Bengal. While the RSS-BJP celebrated Ram Navami with unusual fanfare last year as well, the Trinamool Congress too jumped into the fray to appropriate lord Ram this time around.

Chief minister Mamata Banerjee, who never misses an opportunity to portray herself as the country's most “secular” leader, is now competing with the saffron party to organise Ram Navami. One thing is clear - Banerjee and her party succumbing to the saffron agenda is a moral victory for the BJP, which is desperately eyeing Bengal. 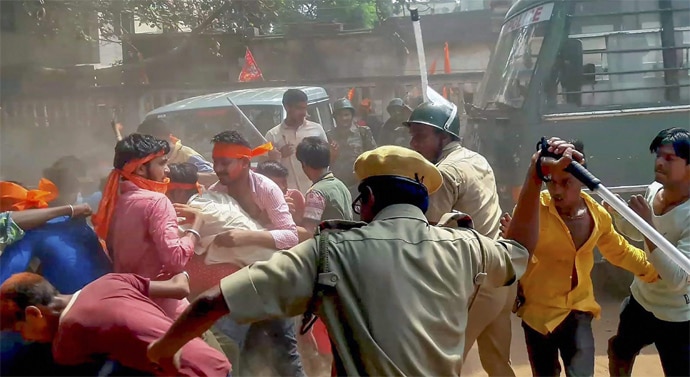 Police baton charge an armed crowd that allegedly barged into a police station during a Ram Navami procession, at Kandi in Murshidabad. (Credit: PTI photo)

Banerjee, who once fought tooth and nail against the communists and succeeded in ousting them, is now facing heat from the BJP. West Bengal, much like the rest of the country, has seen a not-so-quiet saffron surge with the BJP making inroads into the state and the RSS spreading its shakhas across booths and gram panchayats.

BJP's recent victory in the communist stronghold of Tripura, a Bengali majority state, has added to Mamata Banerjee's headache.

The CPI(M)-led Left Front is continuously bleeding in Bengal, which once used to be its citadel. While the debacle in Tripura has made the CPI(M) more inconsequential, it has added to the BJP's political heft in West Bengal.

To defeat the Trinamool, the BJP knows that it will have to bring all the Opposition votes together in the state, where the Left still enjoys a votebank of around 25 per cent. Saffron victory in Tripura was possible as the BJP managed to transfer the 35 per cent Opposition Congress votes to its kitty, reducing the grand old party’s votes to a mere 1.8 per cent.

Amid all the permutations and combinations, the festival of Ram Navami became the perfect ruse for the saffron party and its affiliates to continue their campaign against the Trinamool Congress.

The BJP, in its bid to capture the majority Hindu votes, started organising Ram Navami across the state since last year on an unprecedented scale, portraying Mamata Banerjee and the TMC as a pro-Muslim party that doesn't care for the majority Hindus. This campaign has paid rich dividends to the BJP mainly along the border areas as witnessed in the Cooch Behar by-election where the party bagged a whopping 28 per cent votes, coming in the second position and much ahead of the Left.

Sensing the rise of the BJP, especially after the Tripura elections, TMC this year was in no mood to let go the Ram Navami opportunity. The party organised massive rallies on Ram Navami in an effort to break the BJP's monopoly on Hindu festivals.

While the BJP is primarily eyeing to polarise the majority 67 per cent Hindus, Banerjee, who enjoys the support of the 30 per cent Muslims electorate, is trying to ensure that Trinamool's Hindu votebank stays with the party. She is well aware of the fact that only the Muslim votebank is not enough to remain in power. And given the rising saffron graph in the state, she was compelled to turn the alleged appeasement policy towards the Hindus, which until now was only for the Muslims.

In January, she even distributed copies of the holy Bhagavad Gita to Brahmins present in the Brahman Sammelan organised by her government in Birbhum district, the same district known as BJP's rising ground in the state.

Politically speaking, although the Trinamool tried its best to hijack the Ram Navami celebrations, according to local news reports, the ruling party was far behind the saffron brigade in terms of drawing crowds.

But more than anything else, the BJP's success in pulling the TMC into its favourite game of religious nationalism is definitely a big breakthrough for the Hindutva brigade.

#Ram Navami violence, #RSS-BJP, #West Bengal, #TMC vs BJP
The views and opinions expressed in this article are those of the authors and do not necessarily reflect the official policy or position of DailyO.in or the India Today Group. The writers are solely responsible for any claims arising out of the contents of this article.