Kashmir Ramzan ceasefire is a wise move by Indian government

Sub-conventional operations always demand an early end to hostilities, through the creation of conditions which limit – or end – the scope for any perceived success by those who adopt the path of violence. However, operations in Jammu and Kashmir (J&K) have witnessed dynamic cycles of violence, without an end in sight. No doubt proxy support to terror groups, both foreign and local, and the high stakes our adversaries perceive in the continuation of violence place attaining peace out on a limb.

Through 2017-18, the security forces (SF) successfully conducted robust operations to achieve military domination in J&K. However, the end game in such situations cannot revolve only around the elimination of the last terrorist to attain peace – it must include outreach for the acceptance of the state's narrative by the people.

Through most of Operation All Out, there has been constant criticism of the robust approach without efforts to match counter-narratives thwarting proxy and inimical local narratives. In other words, a mix of "soft power" (psychological and information ops) with hard might has been conspicuously missing in Kashmir.

Instead, the powerful narrative spelt out for the people of Kashmir by the nexus of separatists, terrorists and proxy sponsors dwells on the attainment of Azadi (or, independence). In 1989-90, a similar narrative centered on the slogan "Kashmir Banega Pakistan" went viral with the people imagining the arrival of Pakistani rule the next morning. Then too, our counter-narratives were weak; or simply missing. Wheels of change: "Soft power" needs to run alongside military might

The counter-narrative that needs spelling out by the authorities must dwell upon the impossibility of the achievement of Azadi, and the need for mainstreaming the people with rest of India. Sensing the feasibility of such a counter-narrative, the nexus has ensured that despite the military domination achieved by the Indian security forces, turbulence persists in J&K, frequently through street power demonstrated as "people’s power" – that is the reason for stone throwing, activity via mosques, rabble rousing and the prevention of grassroots political activity. These deny the authorities the space required to project the national counter-narrative.

In the face of this, it is surprising that the Indian public has been unable to perceive how the national counter-narrative cannot be brought to bear alongside only a robust campaign aiming to eliminate the last terrorist.

In a movement, which has now become largely indigenous, the attempted elimination of the last individual who bears arms against the state is a flawed – and impossible – concept, which will only fuel the movement interminably.

In light of this, the Centre’s decision to accept the J&K state’s proposal for a temporary cessation of operations during the period of Ramzan, extending probably to the Amarnath Yatra which follows closely after Id ul Fitr, is not an incorrect one. 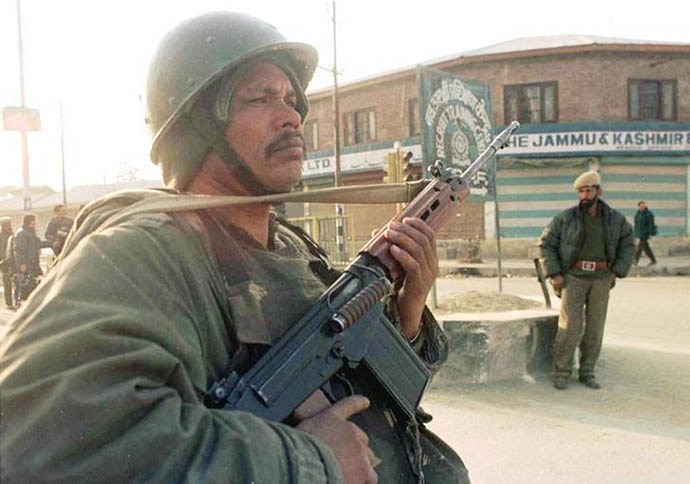 Securing what's ours: File photo of an Indian para-trooper after terrorists tried to storm the high security airport at Srinagar in 2001 (Reuters)

A unilateral restraint in operations is no indicator of weakness, as some may believe, and occupying the higher moral ground by the state will always place it at advantage. In fact, this is a display of the state’s confidence and will to seek peace. The execution must remain such that in the eventuality of failure, a return to operations must not witness greater terrorist capability.

The public in India remains apprehensive of the government’s decision due to incorrect perceptions about the cessation of operations; this is being viewed literally as a "ceasefire" akin to one at the LoC where the guns fall silent. But this is a mistake, for the operations of the SF continue as before – with the exception of offensive aspects, such as "cordon and search" and "search and destroy", which are temporarily shelved. Counter infiltration, area domination, patrolling and even night ambushes remain as usual. As long as terror groups do not openly brandish arms, they can even move freely.

Going by experience, the chances of the successful extension of such a situation depends upon the response - in a similar cessation of operations in 2000, the LeT conducted one of its most daring operations, on the Srinagar airport. Even this time, the LeT has already rejected the offer, but its significance is comparatively reduced due to much lower strength of foreign terrorists.

The challenge now is to prevent any further local recruitment, bring a sense of calm to society, engage with the public (especially youth) in transformational ways, such as town hall meetings, and quietly convey the messages – J&K has much to gain being Indian; politically and geo-strategically, India cannot ever part with J&K; Azadi is an impossible and unattainable mission.

More themes for counter-narratives can be progressively built, but success now will depend on the coordinated political sensitivity needed to handle the next few weeks. Militarily, a political failure must not adversely affect the domination achieved. It’s a tall order – but India has the maturity to handle it.

Also read: Pakistan is working overtime to reignite the fires of jihad in Kashmir

Post your comment
#Mehbooba Mufti, #Ramzan, #Jammu and Kashmir, #Ceasefire
The views and opinions expressed in this article are those of the authors and do not necessarily reflect the official policy or position of DailyO.in or the India Today Group. The writers are solely responsible for any claims arising out of the contents of this article.

The writer is a former GOC of the Srinagar-based 15 Corps, now associated with the Vivekanand International Foundation and the Institute of Peace & Conflict Studies