What's common between Turkish referendum, Brexit and US election?

Given modern Turkey’s secular and democratic history, why have people chosen to abolish the post of Prime Minster?

As we wait in anticipation for the aftermath of the Turkish referendum results, one needs to take a moment and see what factors contributed to these results. The referendum has been described as Turkey’s first step towards a dictatorship.

The vote means President Recep Tayyip Erdogan can hold his position until 2029.  Given modern Turkey’s secular and democratic history, why have people chosen to abolish the post of Prime Minster?

Patterns emerging out of the Turkish referendum are similar to the ones that emerged after UK’s Brexit vote and US’ presidential elections. Major urban centres including Istanbul and Ankara voted against the constitutional amendments.

A generational divide appears to be emerging out of the Turkish vote. The age profile of the voters suggests that older voters supported the constitutional change, while younger ones opposed it.

The pattern was also seen in UK, where the younger voters wanted to stay with the EU while the older voters opted to leave. In the US, Trump had greater support among the elderly.

The patterns are not a mere coincidence. Just like how economics played a role in Brexit and Trump’s victory, Turkey’s economic performance has had an impact in the referendum.

In a period of economic uncertainty, the Turkish economy has seen mixed fortunes over the past few years. Early 2016 witnessed a slowdown in economic growth. However, the economy bounced back towards the end of 2016. 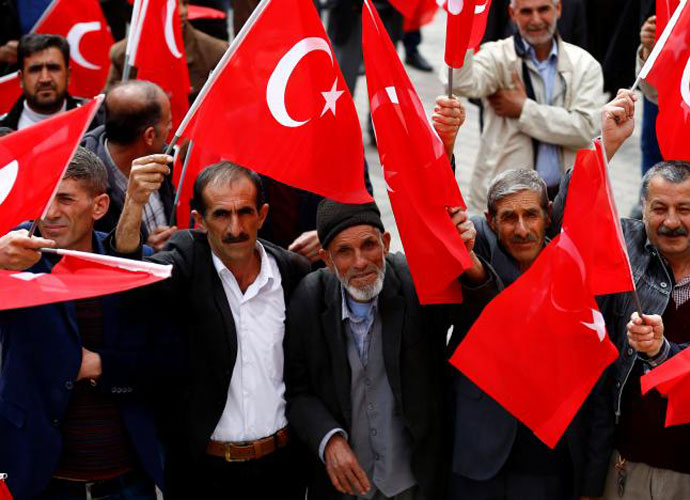 A mix of Turkish nationalism and Islamic identity caused many in the electorate to support Erdogan’s proposed constitutional changes. Photo: Reuters

In 2017, the Turkish economy had a high unemployment rate. Erdogan’s critics have been claiming that the referendum and all the discourse around it has been engineered to deflect attention from the poor economic performance.

The voting patterns also suggest a strong nationalistic and us-versus-them narrative in the elections. The lead up to the referendum witnessed an ugly exchange of words between Turkey, Germany and The Netherlands.

Turkey had a run-in with the EU following the failed coup attempt. President Erdogan used these battles with various EU powers to construct an us-versus-them narrative.

This has become apparent going by the way Erdogan responded to the claims of unfair electoral practices levelled by several in Europe. Among the supporters of constitutional reforms, the overwhelming response was in support of the ultra-nationalistic discourse. Many of Erdogan’s supporters visualise the referendum as the first step in restoring Turkey’s glory during the Ottoman days.

A mix of Turkish nationalism and Islamic identity has caused many in the electorate to support Erdogan’s proposed constitutional changes.

For the past few decades, Turkey has been aggressively pushing for EU membership. While the ongoing territorial dispute with Greece and the differences over Cyprus have been cited as the reasons for the delay in Turkey’s membership, the real reason appears to be because of Turkey’s religious difference with mainland Europe.

The long drawn and increasingly futile attempt to join the EU has pushed a section of the population to relook at Turkish identity. The growing trend to assert Turkey’s Islamic roots is a sign of a search for a new identity.

In the backdrop of this us-versus-them battle, Erdogan’s nationalistic rhetoric won over a certain section of voters.

Turkey, which was viewed as a symbol of stability in the Middle East, has become a victim of terror strikes. The attack on Istanbul’s airport led to a drop in the number of tourists visiting the country.

With turmoil cross the border in Syria, Turkey has become vulnerable to attacks carried out by the ISIS. At the same time it is also fighting the Kurdish extremists.

In the light of security concerns, popular support was for a strong central leadership that could effectively deal with the challenges posed by ISIS and Kurdish separatists.

Erdogan’s plan to shift towards a presidential system got support from people who wanted to see a strong central leadership to deal with security concerns.

While the long-term impact of the referendum results will be a matter of hot debate, one needs to understand how Turkey got to this situation in the first place. The patterns emerging out of the referendum vote-share have striking similarities with the US elections and UK’s Brexit.

Turkey’s referendum exposed a gap between the rural and urban and the young and old. Economic difficulties and increasing unemployment appear to have played a part in the result.

The frustratingly long time being taken to secure Turkey’s EU membership pushed many in the country to search for a new identity. Here, Erdogan’s strong nationalist stance won over people.

Finally, Turkey has been increasingly vulnerable to attack from the ISIS. People felt the need for a strong central leadership to tackle the situation. Therefore, the presidential system became attractive.

While a combination of factors has lead to the vote in favour of constitutional reforms, one should not shy away from the fact that this is a highly fractured verdict.

With a 51-49 margin, it would be important to keep in mind the Opposition’s concerns when framing the constitutional changes.

Also read: Why the world will keep questioning the legitimacy of Turkey’s referendum

#Brexit, #Turkey referendum, #Recep Tayyip Erdogan
The views and opinions expressed in this article are those of the authors and do not necessarily reflect the official policy or position of DailyO.in or the India Today Group. The writers are solely responsible for any claims arising out of the contents of this article.

The writer is an academic associate at Indian Institute of Management, Ahmedabad.