Turkish President Recep Tayyip Erdogan arrived on a two-day visit to India on April 30. This is his first visit to the country as the president of Turkey (he had earlier come to India in the capacity of prime minister, in 2008) and assumes significance as barely two weeks ago, he won the constitutional referendum, albeit by a slender margin, securing nearly 51 per cent votes and gaining enormous governance powers - even though he is not politically secure and his position remains imperilled by threats from within.

The Turkish opposition cried foul, alleging large scale manipulation in the referendum process. Erdogan had survived a military coup attempt in 2016, which raised fresh fears of his political existence.

Against the backdrop, Erdogan is likely to present a bold facade on his India trip to convey that he is in control.

He is slated to propose the strengthening of anti-terror cooperation and deepening of ties in investment and trade.

On May 1, the Turkish president will hold talks with PM Modi, where the topic of Nuclear Supplies Group (NSG) may come up for discussion, among significant issues.

On the face of it, Turkey does not seem opposed to India's NSG membership, but it is expected to proceed with caution.

Erdogan, in all probability, is likely to further sensitise India on the threat he perceives from Fethullah Gulen Terrorist Organisation(FETO).

Last year's coup attempt to dislodge Erdogan and the outfit's activists allegedly being harboured in India remain a cause of concern to the Turkish president. 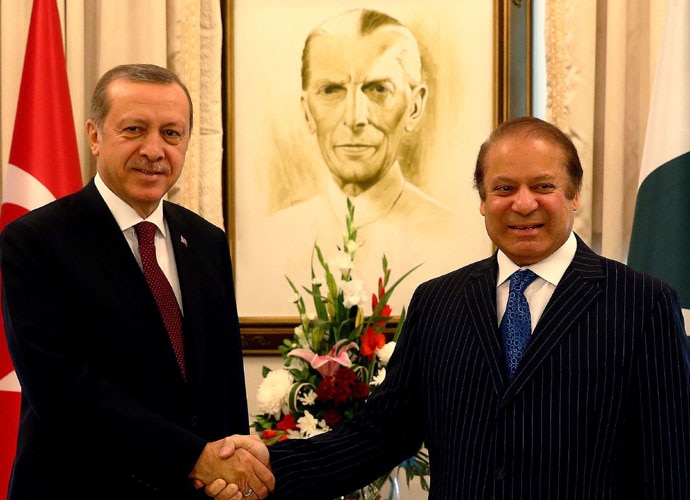 Erdogan is also learnt to be considering flagging his apprehensions that the FETO has been able to infiltrate into India through educational institutions and associations.

This concern notwithstanding, there are reports that Turkey, on its part, has been covertly supporting Muslim brotherhood elements in India.

Erdogan's detractors in Turkey allege that the president is promoting neo-Ottomanism following his referendum "triumph", which is also distancing Turkey from the West - with almost irreparable relations with Germany, Netherlands and other EU nations.

Following his referendum victory, Erdogan has become an ardent supporter of Sunni Salafi groups to counter Syria. His support, therefore, to the Muslim brotherhood does not look surprising.

New Delhi, while dealing with Istanbul during the Erdogan visit, must also take into account the excellent relations that Turkey enjoys with Pakistan.

The two countries are already in a strategic relationship. Pakistan and Turkish Air Force are in a formal deal where Turkey would buy 52 Super Mushkak trainer jets and help train its pilots to support the recovery of the Turkish armed forces to meet the shortage of hardware and pilots in the aftermath of the coup attempt.

Further, there are regular joint naval exercises between the two countries. On Erdogan's last visit to Pakistan ( incidentally he has paid seven visits to the country), he addressed the joint session of the Parliament, which was also attended by the top brass of Pakistani military. Besides their armies warming up, both Turkey and Pakistan have bilateral trade ties worth 10 billion dollars.

Pakistan supports Turkey's position in Cyprus, Azerbaijan and Armenia, which is not so palatable to the West. Importantly, Turkey supports Pakistan on the Kashmir issue. Modi government would do well to factor this in while dealing with the Erdogan administration.

Diplomatically, it appears ceremonially appropriate that Jamia Millia Islamia (JMI), a central university, is conferring an honorary doctorate to Erdogan. JMI hosts should also remind Turkey that Indian Muslims have supported Turkey all along.

In 1912-13, a medical mission from India, under Dr Ansari, was dispatched to Turkey on compassionate grounds. It's high time Erdogan recognised this historical fact in letter and spirit and strived to strengthen bilateral ties with New Delhi.

Even Mahatma Gandhi had supported the Khilafat movement in Turkey despite criticism from many quarters. Turkey, under Erdogan, seems to be playing an active role in its efforts to contain the Islamic State menace in the region.

The terror attacks in Ankara and Istanbul airport have been eye-openers for Erdogan. He must share hard-time intelligence with India on IS related activities in the war-torn region and the involvement of Indians, if any.

One can safely assume that Turkey - ensconced in the hotbed's proximity - will have more access to real-time intelligence and any robust cooperation between the two countries will shine a new light in the bilateral ties.

Also read: Why Anuja Chauhan deserves my salaam for her new book Baaz

#India-Turkey ties, #Turkey, #Recep Tayyip Erdogan
The views and opinions expressed in this article are those of the authors and do not necessarily reflect the official policy or position of DailyO.in or the India Today Group. The writers are solely responsible for any claims arising out of the contents of this article.