A day in the life at a German refugee camp

"Do you know what his name means?" I asked Amara and Ivana. We had just finished serving breakfast at a temporary shelter for refugees, the "Traglufthalle" in Berlin. Bilal, a Palestinian refugee who is a volunteer at the facility, bustled about, serving us coffee and tea, before finally sitting down himself, weary.

I continued: "It means 'the one who calls others to prayer' in Arabic."

"His name is in honour of the first black slave who converted to Islam during Prophet Muhammad’s time. He was tortured to death by his masters," I explained.

Amara, Ivana and I sat quietly, lost in our own thoughts. It was Ivana who broke the silence. "Tell us your story," she said simply to Bilal. 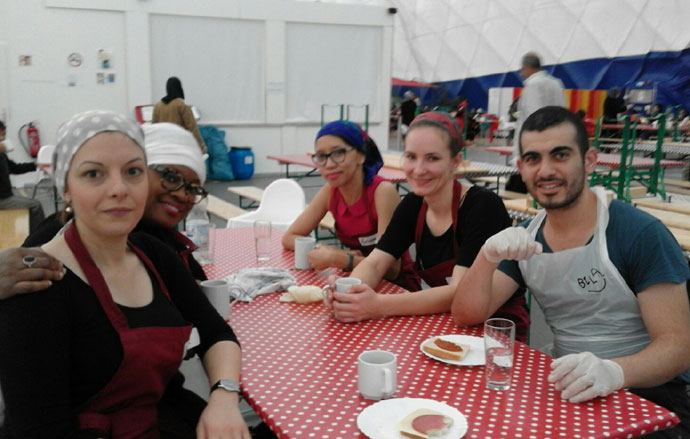 I woke up on Saturday morning in Berlin to the news of the terrorist attacks in Paris. It was a friend on one of my WhatsApp groups who wanted to check whether a mutual girlfriend, residing in Paris, was safe.

It was 4.30 am but I switched on the TV in my hotel room, flicking from the BBC to Monde Europe and the German news channel, ARD. It could have been any one of us. When the attacks happened, I had just returned to my room after dinner. We have had a long day, discussing among other things, the ongoing refugee crisis.

Bilal is in his early 30s, articulate, and sharp. Last year, he got on a boat from Egypt, having left his home town in the Palestinian territories. Eight months later, he finally reached the shores of Europe. A woman from the same boat suffered a miscarriage as she was hoisted out of the boat. Her husband later divorced her, blaming her for the loss of their child.

The boat after them never arrived. All drowned at sea.

Bilal told us that he was an engineer with a staff of 200 people. He was impatient then, and always in a hurry. It is all different now, he said, with no trace of bitterness in his voice.

He has been volunteering for some time now, since arriving here several months ago. People tell him that he is wasting his time, but he is happy here. He feels useful here.

We were interrupted by a lady. He spoke briskly in Arabic. She went away. 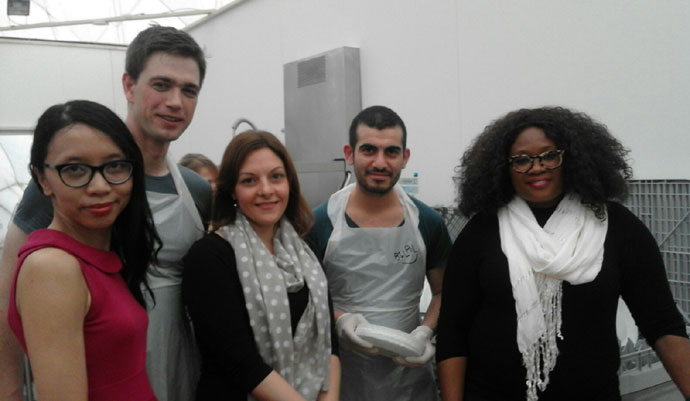 Serving breakfast, Amara, Ivana and I tried our best to address the refugees in their mother tongue or a familiar language, once we had figured out where they were from. From 9 am to 10.15 am, we greeted them in Arabic, English, German, Pashto, Russian and Urdu. The bulk came from Afghanistan, Iraq, Pakistan and Syria. Some were new arrivals, having gotten here the day before. Many had toddlers and babies. The more confident children spoke to us in halting German. They had access to free German lessons. Young German volunteers came to play with the children.

I tried hard to find that connect, to tell them somehow that they were welcome. "Good morning, sir" or "ma’am", I’d say in a cheery voice, even though I felt anything but. Several of the women smiled shyly. Children peered at us curiously, their eyes just barely level with the counter top. Little curly mops of hair, some auburn, some blond. They pointed at what they want, or they would nod in surly fashion if we were to gesture at a particular food item. Most were shy. Several had to be cajoled by their parents to eat something.

They each got four slices of bread, three slices of chicken ham and/or cheese, several dollops of marmalade of various flavours, and a banana. They could help themselves to as much butter as they wanted. Most took far less.

I got to meet Paul, the star of one of our colleagues' documentary on the migrant issue. He was from Cameroon. Tall and lanky, he speaks fluent French and now resides in Berlin.

He spoke about his arduous trek on foot across the African continent. My French was rubbish but I understood his words. It was "very difficult", he said. He spoke about his trauma, the inhuman conditions, his flee through the forests.

"The woods are lovely, dark and deep

But I have promises to keep

And miles to go before I sleep

And miles to go before I sleep."

Post your comment
#Migrants, #Paris Attacks, #Europe, #Syria
The views and opinions expressed in this article are those of the authors and do not necessarily reflect the official policy or position of DailyO.in or the India Today Group. The writers are solely responsible for any claims arising out of the contents of this article.