Toeing the line of the establishment is what the nexus between the government and the Mukesh Ambani-led company is all about.

A full page advertisement featuring Prime Minister Narendra Modi may not be a new thing for any regular newspaper reader. It, however, becomes quite a startling affair if the image gets connected with one of the biggest conglomerates of India. Reliance Jio is largely touted as the next big technological revolution, set to change the way we perceive everyday reality. More than its deceptively alluring packages, the political appropriation in terms of "being the face of Digital India" should certainly be a cause for great concern.

The newspaper ads were followed up by another page length image of Modi on the second day. This time, it was about the interview he was supposed to give to a channel powered by Network 18. It is a well-known fact that the latter is owned by Reliance, headed by Mukesh Ambani.

The takeover of media channels by business behemoths is certainly not a new development. Right from local, regional news channels, like the ones in Tamil Nadu where both the DMK and AIDMK boast of a sizeable number of "their" channels, to national news channels, the corporate clout is rising at an alarming rate.

Acclaimed journalists did respond to this change, either by tacitly acquiesing to the demands of the corporate philosophy or by moving to different channels expressing their displeasure with the apparent political impact it might have on the integrity of the reportage. One such example was when senior journalists like Rajdeep Sardesai, Karan Thapar, Boria Majumdar left CNN-IBN and moved to India Today. 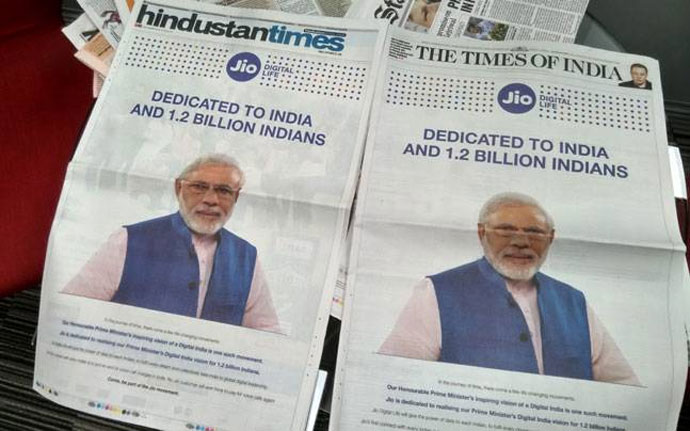 The connection between a corporate-influenced media and the systematic disciplining of public reactions, behaviour and lifestyles is extremely profound. Michel Foucault was one of the critical voices who stressed on the coaxing nature of "discipline" being one of the factors to realise power. With the increasing grip of business magnates on one of the pillars of democracy, the transition towards a "disciplined society" is quite evident.

Discipline over here becomes a homogenising tool to perfunctorily iron out the existing fault lines of the society. The transient glossing it brings about acts a breeding ground for a false sense of sanguinity in the present administrative model.

Toeing the line of the establishment, through a more graphic imagery of digitised prostration, is what the nexus between the government and Reliance Jio is all about. The disquieting newspaper ads have now been followed by a television ad that glosses over the potential of Digital India, powered by the "inclusive vision" of Reliance. The voice over for this particular ad, as has been the case for a number of recent ventures, is done by Amitabh Bachchan who completes the vicious triangle of political dominance, corporate weight and the enticing, Bollywood glamour quotient.

Fortunately, we live in an age where there is no direct give and take of political power between the legal authority and dominant forces of the society. The State, even in a rapidly globalising world, continues to retain its hold over domestic affairs.

At the same time, the mostly regulatory role it exercised till the 1990s has now been changed to that of a benign facilitator of economic growth. The image of the media is turning into that kind of a commoditised service which clears all regulatory impediments under the name of "efficiency, quality and diversity". It almost acts as the new yardstick for good governance, a clarion call seeped in the neo-liberal idea of functioning. The visual media, in particular, is losing sight of the very political virtues of impartiality and neutrality that it swore by at its inception.

By getting mired in petty corporate calculations, it dishes out technocratic governance material that captures the impressionable minds with its capacity to generate awe and admiration. Both the newspaper and television ads come wrapped in this soothing message which instils an infatuation for the the outer covering. The actual, meaningful and significant material in the offing inside becomes a mundane corporate formality.

Reliance Jio, or for that matter any such agency is quick to emphasise the glitz surrounding the "revolutionary idea", howsoever unachievable it may be. This trajectory of "you asked me to bend, I crawled philosophy" is nothing but a modern avatar of the myriad ways in which the Gramscian hegemony casts its effect on the society at large. Consent is measured by the sheer volume of consumerism and not by analysing collective, critical reasoning.

The illegal or the improper nature of this dalliance is a matter of further discussion. The fundamental question is to make sense of the very thought process that goes behind this nexus. Ironic as it may sound, the Network 18 interview went on air on the same day as the national strike by close to 15 crore workers concerning the Minimum Wage Bill.

Modi talks about Digital India for all. The attention should perhaps shift to the realisation of the more fundamental necessities of life. Until then, the media-driven growth agenda will continue to mask the everyday plight of our much celebrated demographic dividend.

Also read: Mukesh bhai wants me to switch to Reliance Jio, but should I?

Post your comment
#Mukesh Ambani, #Narendra Modi, #Digital India , #Reliance Jio
The views and opinions expressed in this article are those of the authors and do not necessarily reflect the official policy or position of DailyO.in or the India Today Group. The writers are solely responsible for any claims arising out of the contents of this article.