Why Rohingyas are easy scapegoats for Indian government

Its policy is a serious deviation from India's sustained policies post-Independence.

Governments the world over demonise immigrants for all sorts of crimes: lack of proper documents, no knowledge of local languages or dialects, impatience with necessary procedures, and so forth. The Indian government has chosen to label some of them terrorists. Intriguingly, the government had made no such objections in 2012-13 when Rohingyas began to enter into India, seeking shelter and protection from the Myanmar state, its military and the radical, militant Buddhists.

The government, in earlier cases, has given shelter to many peoples. Since the late '50s, some one million Tibetans, including the Dalai Lama, fled from China to India. Prime Minister Jawaharlal Nehru welcomed them even though he knew that the Chinese government considered this a betrayal of Sino-Indian friendship. This was a major cause of breakdown of relations and a factor in the 1962 Sino-Indian war. Later, in December 1971, even while the Bangladesh war was on, taking into account the dreadful damage done to the Bangadeshi infrastructure and people, in which three million Bangladeshis were killed by Pakistani troops and the Razakars, the government allowed many lakhs of Bangladeshis to settle in the border areas of the two countries. Where is the 'organised influx of illegal immigrants from Myanmar...?' Photo: Reuters

This government has, instead, chosen to play up "the nation under threat" factor. In a 15-page affidavit presented to the Supreme Court, the government stated that it had found that "many of the Rohingya figure in suspected sinister designs of ISI/IS and other extremist groups... to achieve their ulterior motives in India... of flaring up communal and sectarian violence in sensirive areas."

Let us examine this affidavit. It warns of "suspected sinister designs of ISI/IS..." The Rohingyas have been in India since 2012-13 in tens of thousands. No such accusations have been made earlier. There has been no clinching evidence, thus this phrase: "suspected sinister designs of ISI/IS..." doesn't hold. So the claims are merely "suspected" and "sinister." There has not yet been any conclusive proof of any such activity by the Rohingya from 2012-13 to date. This migration across borders is claimed to be a "situation ...seriously harming the national security". 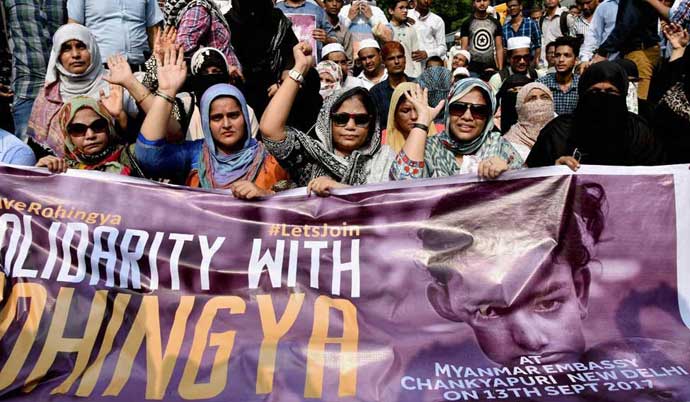 This government has, instead, chosen to play up 'the nation under threat' factor.

How is national security at risk and where is the "organised influx of illegal immigrants from Myanmar...?" Further in the affidavit the government states that facilities given to the immigrants "would deprive legitimate Indian citizens of their legitimate share" of their rights. Their fundamental rights would, therefore "be violated".

This it is claimed would lead to "hostility towards immigrants, resulting into (sic) inevitable social tension and law and order problems."

But this did not occur in the late '50s when one million Tibetans immigrated to India. India was not that affluent then nor as powerful. But nothing was destabilised in this country.

The same applies to the massive immigration of Bangladeshis in 1971-72. In its statement, the home ministry stated that the government neither supported illegal migration to its territories, nor of Indian citizens to foreign countries "as a matter of policy".

But this policy is a serious deviation from India's sustained policies post-Independence.

More seriously, why is the Modi sarkar raising the ISI/IS bogies now? Are the Rohingya immigrants suspect because they are Muslim?

The religious factor was critical in the Myanmar Buddhist attacks on the Rohingyas on several occasions, with the current pogrom being the most serious.

But the Bangladeshi immigrants have been treated well in the border areas and elsewhere in India.

Some in the BJP speaking frankly, but off the record, say they do not want Muslim immigrants, not only because of their alleged terrorist links but because they cannot adjust to real secularism or what is called Hindutva.

#Rohingyas, #Rohingya genocide
The views and opinions expressed in this article are those of the authors and do not necessarily reflect the official policy or position of DailyO.in or the India Today Group. The writers are solely responsible for any claims arising out of the contents of this article.