Rohith's suicide was not due to 'personal problems', read his letter to V-C

A few weeks ago, he had asked for ropes to be provided in the rooms of all Dalit students to hang themselves.

(Dr Dibyesh Anand, associate professor in International Relations from London's University of Westminster, had met Rohith and other protesting  Dalit students during his visit to Hyderabad University where he delivered public lectures on nationalism and democracy. He has been given the copy of the letter by friends who worked with him. This piece first appeared on his Facebook page.)

Police waited the entire night while hundreds of students guarded the body of Dalit scholar Rohith Vemula in Hyderabad University and then struck around six in the morning when many students had gone to rest after a sleepless night. They struck and snatched the body away without any family permission and used the opportunity to beat up savagely dozens of students and arrest eight Dalit students. All this inside a university campus.

While a thousand students have now gathered back and there is media presence, the conduct of the police is deplorable at best and cruel sadism at worst - all with the full backing of university administration.

Those who think the suicide was simply due to "personal problems" should read the scholar's letter written to the V-C a couple of weeks ago, where he asks him to provide ropes in the rooms of all Dalit students to hang themselves. It is Rohith's immense generosity that in his final suicide letter, he is not bitter against the system that failed him and millions of other Dalits. This does not change the fact that the University failed in the basic duty of care.

Rohith Vemula's letter to the University of Hyderabad V-C 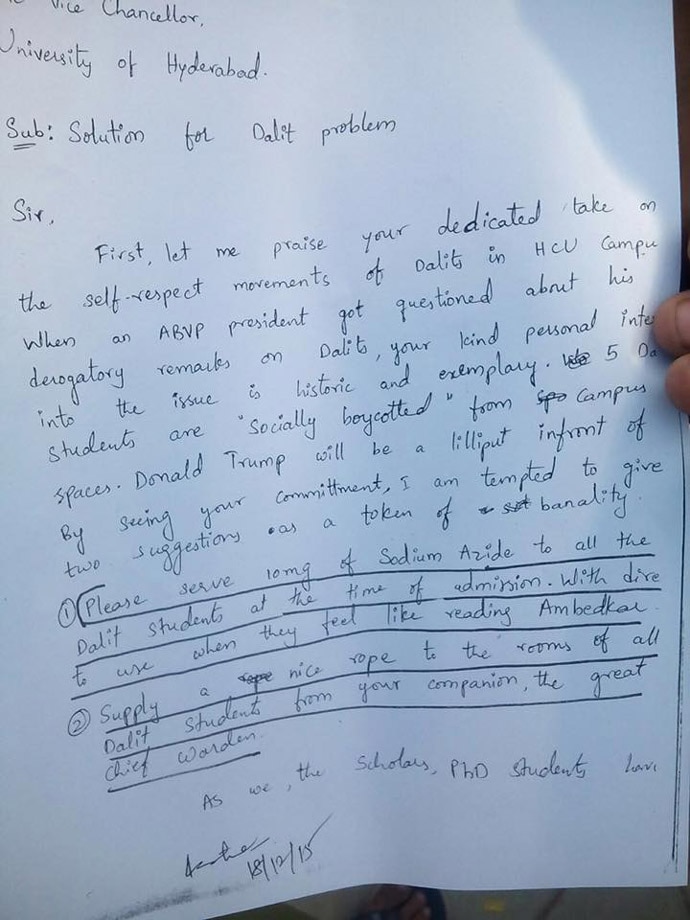