Day after the slap: Will Roopa Ganguly's charm work for BJP?

Draupadi slapped a woman outside a polling booth in Howrah on Monday.

Okay, so the woman is from the Trinamool Congress and Draupadi, aka Roopa Ganguly who shot to fame as the wife of the Pandavas in BR Chopra’s 1988 serial on the Mahabharata, has been a card-carrying member of the BJP since January 2015. She is also now the party’s candidate from Howrah North, which goes to the polls on April 30.

An FIR was registered against Ganguly. Several bystanders who shot the incident on their phone cameras are believed to have been thrashed by the ruling Trinamool. Having enthralled millions of viewers in India and across the world for several weeks and months with her portrayal of the complex female protagonist in the ancient Indian epic – the Mahabharata serial ran for 94 episodes, or weeks, over 1988-89 – one wonders why Roopa Ganguly thought to settle for 15 seconds of fame by connecting the palm of her hand with someone else’s cheek, in her latter-day avatar as a politician. 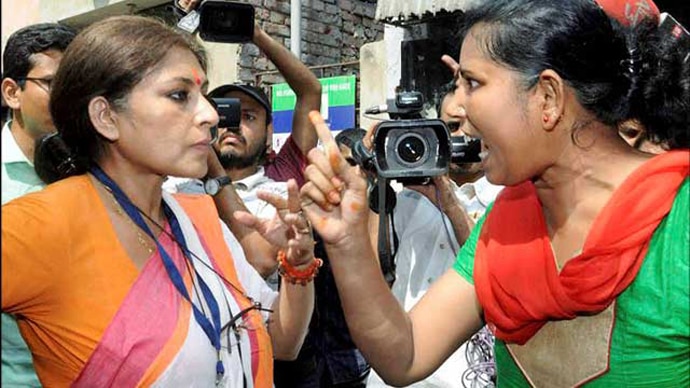 Ganguly argues with a TMC supporter.

Perhaps, she didn’t have much choice, although if the Bengali intellectual’s sex symbol – Ganguly has acted in films by Aparna Sen and Rituparno Ghosh – had read her Jean Paul Sartre, she would have known that there are always choices to be made in life.

For a minute, though, let’s give Ganguly her due, that she, indeed, didn’t have a choice. There was a scuffle outside a polling booth in Howrah district – parts of which went to the polls on Monday – and the Trinamool supporter pushed her and so…

Not one to take things lying down, Ganguly complained to the constituency observer. “In many booths, the person responsible for refreshing EVMs in intoxicated, can't see or is inactive,” she said.

Certainly, the BJP believes it has got full “paisa vasool” by not only giving the Bengali actress a ticket, but also by making her the state Mahila chief. In that sense, Ganguly is like Smriti Irani, who after she left TV for the BJP, was made the women’s BJP chief for Gujarat.

It’s interesting that the BJP likes its women politicians to be from the film and TV world – a far cry from Sushma Swaraj, a grassroots politician, who has come up the hard way in the party.

Like Smriti, who is immensely popular with the masses (she certainly has the histrionic touch), Roopa is said to have a very good chance at winning the Howrah North constituency that she is contesting. Her rivals are cricketer-turned-politician Laxmi Ratan Shukla from the TMC and Congress’ Santosh Kumar Pathak.

Seems the outgoing deputy speaker in the West Bengal Assembly, Sonali Guha, said some time ago that the voters in Howrah North would “strip” Roopa, just like they did Draupadi, this time by voting for someone else. To which Roopa replied, “When they stripped Draupadi, Krishna came to her aide. And now Krishna has come to mine.”

The last was said to be a reference to prime minister Narendra Modi, who has campaigned for her in her constituency.

Certainly, the BJP is desperate to better its political account in West Bengal. It won no seats in the 2011 Assembly polls, but won the byelection to Basirhat Dakshin in North 24 Parganas district in September 2014, months after it swept to power in the general election. In fact, in the Lok Sabha polls, the BJP won two seats and an astounding 17 per cent of the vote, while the Congress dropped to a mere nine per cent approximately.

The party realises that it doesn’t have any real faces on the ground in West Bengal. Tathagatha Roy, a former RSS member, has been made Tripura governor, while state general secretary Rahul Sinha is often said to be at odds with the state chief Dilip Ghosh.

Certainly, the party is pulling out all the stops to make that happen. Sinha has been given a ticket from Jorasanko (a north Kolkata neighbourhood, where Rabindranath Tagore and his family used to stay), the constituency in which the recent flyover collapsed.

The question is, will Roopa Ganguly’s indiscreet charms help her pull off Howrah North? Fast forward to D-day on May 19, when the counting takes place. Win or lose, a new avatar awaits Draupadi. It helps you understand why Ganguly feels she will always feel the love from her audience.

Post your comment
#TMC, #West Bengal polls, #Roopa Ganguly
The views and opinions expressed in this article are those of the authors and do not necessarily reflect the official policy or position of DailyO.in or the India Today Group. The writers are solely responsible for any claims arising out of the contents of this article.