Even if both the communities grew at 2011 rates, it would take 270-odd years for the number of Muslims to be equal to that of Hindus.

RSS chief Mohan Bhagwat recently addressed a large gathering of teachers from the Braj region of Uttar Pradesh in Agra and made an extremely controversial statement.

To a question on the alleged rapid growth of Muslim population, he responded by asking which law had asked Hindus to have fewer children? The obvious attempt to communally polarise the electorate before the 2017 state elections cannot be missed.

First in the name of Ram Mandir, then the cow and now population - all part of a carefully calculated strategy to divide Hindus and Muslims and reap electoral gain.

Right-wing organisations like the RSS and VHP back then tried to create a huge propaganda about the fact that the Hindu population had gone below 80 per cent! 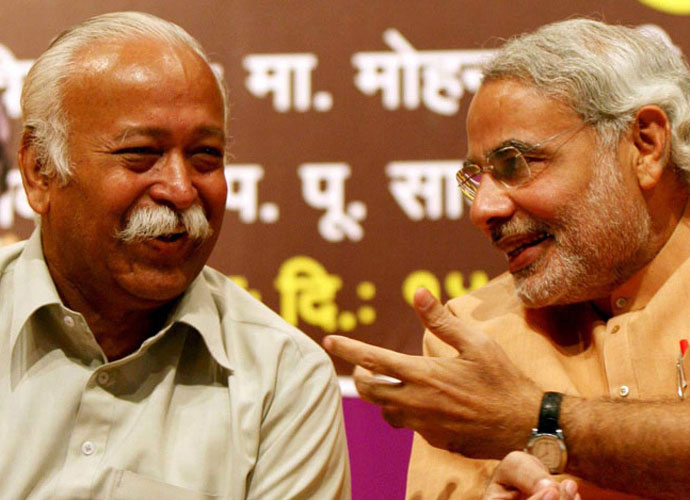 The RSS chief is not alone when he makes such a demand from Hindu women, which borders on patriarchy and sexism. BJP MP Sakshi Maharaj in January 2015 had advocated that Hindu women must produce four children.

He was issued a show-cause notice by the BJP but nothing ever happened after that, perhaps leaving it open for the average person to speculate on whether the party actually endorses his family planning model!

The BJP and RSS have a line of thinking that is not very different from groups like VHP when it comes to the misplaced fear that India will become an "Islamic state" and will be over-run by Muslims.

In September 2004, no less than then BJP president Venkaiah Naidu exclaimed that demographic trends were "disturbing" and a "cause of grave concern for all those who think of India's unity and integrity in the long run".

In October 2013, RSS leader Dattatreya Hosbale told reporters on the sidelines of the RSS national executive meeting that each Hindu family should have "at least three children" - an idea that was originally mooted by former RSS chief, the late KS Sudarshan!

LK Advani, while he was deputy prime minister, had called for "a rigorous and continuous observation and analysis of the changing demography of different religious groups in various parts of the country" while releasing a study on the subject titled Religious Demography of India.

Advani added that such an analysis was of paramount importance to maintain the integrity of "our borders" and peace, harmony and public order within the country. The basic thesis of the above "study" by authors AP Joshi, MD Srinivas and JK Bajaj was that the population of "Indian religionists" (Hindus) was steadily declining while that of Muslims was steadily rising, resulting in a decline of about 11% for the former.

This, most respectfully, is preposterous and unsupported by any evidence whatsoever.

Even if the population of Hindus and Muslims grew at the 2011 rates (which is unlikely as these growth rates have and would keep declining for every community as prosperity, levels of education, etc. rise) it would take 270-odd years for the population of Muslims to be equal to that of Hindus. By then, the population of India would have to be a whopping 13,000 crore.

For those who may still have doubts about the BJP's views, here is what Prime Minister Narendra Modi said in 2002 in his speech at Becharaji in Gujarat.

Likening the riot relief camps inhabiting Muslim victims mostly to "open baby manufacturing centres", he stressed on the need for family planning for those who followed the "Hum Paanch, Hamare Pachees" model.

His obvious reference was towards Muslims, who in the worldview peddled by him, take four wives and reproduce 25 children!

Togadia's VHP gave similar views about the Muslim community. What Modi and Togadia forget to tell their audiences is how extraordinary the sex ratio would have to be in favour of women among Muslims to even achieve a situation where every Muslim man can have four wives, and while the sex ratio among Muslims is only slightly better than Hindus, it's nowhere close to being at a number which allows every Muslim man to take four brides.

What Modi and VHP also perhaps did not mention, while getting caught up in all this rhetoric, is that a study from 1971 shows that percentage incidence of polygynous marriages (where a man has more than one wife) is 5.80 per cent among Hindus, which is higher than it is for Muslims at 5.73 per cent.

The incidence of polygynous marriages is highest among certain tribes (15.25 per cent) followed by Buddhists (7.97) and Jain (6.72 per cent). This piece can be read on the website of South Asia Citizens Web (SACW).

Moreover, the author of the above SACW piece also points out that "polygyny cannot lead to higher fertility as more than one female marrying one male is not likely to increase fertility; on the contrary, it is likely to decrease fertility."

So Modi's propaganda back then and Togadia's fear-mongering now about Muslims having 25 children thanks to their multiple marriages, is just not true.

Also read: Your reproductive organs are not giving a gift to the world

No doubt, Muslims have had higher fertility rates than those in other religious groups. The total fertility rate was almost half a child higher for Muslims than for Hindus in 2005-06.

However, as compared to NFHS-1 survey (1998-93), the Hindu-Muslim fertility difference declined significantly from 1.11 children per woman in 1992-93 to less than 0.5. Note that Muslims recorded the highest decline in fertility among major religious groups in India.

Based on this hard evidence, author Dr Devendra Kothari, population and development analyst who has obtained a Master's degree in population sciences from Harvard University and a PhD in this field, says: "If the rates of decline of fertility seen from 1992 to 2005 continued for another 13 years, then in 2018 the total fertility rate of Muslims and Hindus would be about the same. As the Muslim population is much younger, it would continue to grow more rapidly than the non-Muslim for some time, but eventually the growth rate of both populations would be the same and the Muslim portion of India's population would tend to stabilise."

Modi as PM has time and again assured us of "Sabka Saath, Sabka Vikas"- a slogan that everyone lauds and hopes would someday translate into reality. Does he share Bhagwat's views on this issue? Is he going to allow bachelors of RSS like Bhagwat and Sakshi Maharaj to dictate the population policy of India?

Are these view not contrary to our goal as a nation to control population growth so that our resources are not overburdened? Or is the poor economic performance by the government the reason why the agenda is being diverted from "falling sensex" to "rising census"?

That's an answer, I am sure, the entire 1.25 billion of us would be eagerly waiting for from PM Modi.

#India Muslims, #RSS chief
The views and opinions expressed in this article are those of the authors and do not necessarily reflect the official policy or position of DailyO.in or the India Today Group. The writers are solely responsible for any claims arising out of the contents of this article.