A pracharak in the house will mean sweet revenge for all the slights.

Decades after Independence, will the twice-banned RSS finally get one of its own - a pedigreed ideologue and one of the founders and the third president of the BJP - inside the big house atop Raisina Hill?

Sangh Parivar veteran Murli Manohar Joshi, after a recent knee replacement surgery, is raring to go and the RSS seems to have decided to grab the historic moment and choose him as the candidate for President. 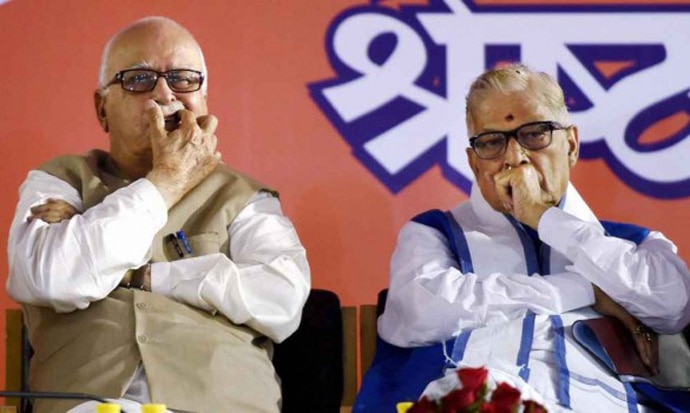 Sidelined and forced into retirement in the confines of the Margdarshak Mandal, along with LK Advani and Yashwant Sinha, after Modi's massive win, Joshi is now seeking a comeback.

It's a historic moment for the Sangh to finally have a "pracharak" as "mahamaheem". After all, what sends out a bigger, power-packed, punchy message?

My DailyO piece was one of the first to observe that Pranab Mukherjee would not get a second term.

APJ Abdul Kalam - the first President chosen by the BJP - whilst being a model President was also a compromise forced by numbers and brokered by Pramod Mahajan.

Union culture minister Mahesh Sharma made this evident with his infamous "despite being a Muslim" remark.

Till recently, the RSS did not have a view or even a veto on the candidate, but Joshi's emergence will see it rally around.

The Sangh veteran is one of the very few BJP leaders the RSS approves of.

More importantly, they trust that his "ideological core" has not been diluted like other BJP leaders', the obvious example being LK Advani.

The RSS also feels that Joshi has been exceptionally disciplined - first giving up his constituency for Modi and never complaining about being forced into retirement. Sangh sources point to Advani and Yashwant Singh's public tantrums and intemperate statements.

Joshi, who was accused of "saffronising" education during his tenure, wears it as a badge of honour just as it is for the RSS.

To market the candidate Joshi project to Modi, the RSS has pointed out the benefits it would bring in terms securing Brahmin votes in the all-important, mother-of-all polls - the 2017 Uttar Pradesh elections. How it would make the Brahmins happy.

The fact that Joshi has always been a disciplined soldier of the party is said to be another factor in his favour.

Insiders point out that Modi actually does not have a strained relationship with Joshi - he was the "sarthi" of Joshi's ekta yatra. And, the two have a very clear-cut, take-no-prisoners approach to ideology in common.

Unlike Advani, who is loathed both by the RSS and Modi, if Joshi is made the candidate for President, it would galvanise the cadre and ensure that more of the faithful flock to the RSS.

A minister, who is privy to the wheeling and dealing, says: "After all, Dr Joshi is a learned leader. He will make a wonderful president with his stature. We have foisted Irani in his previous ministry we need to make amends."

The RSS would also not mind the perceived snub to Advani - it will ensure that even the tallest of leaders never rebel against the mothership again.

With the terrible bench strength of the right wing, Joshi appears a giant among pygmies. After all, if it's a choice between Venkiah Naidu, who calls Modi "an avatar of god" and Joshi, the latter at least maintains a semblance of dignity.

The final choice will be jointly made by Mohan Bhagwat and Modi, and the PM is also keenly aware of the historic nature of the decision.

It would appeal to Modi's instinct for the dramatic and the bold. And, it would also get him a President who he can trust on crucial matters and count on in the run-up to his own campaign in 2019.

While it is early days, the candidate Joshi project has been kicked off and since it's currently sponsored by the most powerful body in the country, it might see fruition. A pracharak in the house - sweet revenge for all the slights. Also, an appeal to the peculiar persecution complex that the RSS has.

#LK Advani, #Murli Manohar Joshi, #Race for President
The views and opinions expressed in this article are those of the authors and do not necessarily reflect the official policy or position of DailyO.in or the India Today Group. The writers are solely responsible for any claims arising out of the contents of this article.