22-year-old Mevlut Mert Altintas, who shot dead Andrei Karlov at an Ankara art gallery, is the face of an exploding, out of control grief over Syria.

He had little in common with Dzhokhar Tzarnaev, the young Boston Marathon bomber of Kyrgyztani-American origin, or Burhan Wani, the Hizbul commander killed in an encounter in July this year – the unbelievably angelic faces of terror. In fact, the 22-year-old Mevlut Mert Altintas was an off-duty riot control cop who had graduated from a police academy in Turkey just two and a half years ago.

But the photograph of a suited-booted Altintas, with hands raised, fingers pointing upwards, right hand holding the gun that had just fired seven shots killing the Russian ambassador to Turkey, Andrei Karlov, at a high-end art gallery in Ankara, the capital city – is an unforgettable and grim freeze frame of our fractured times. 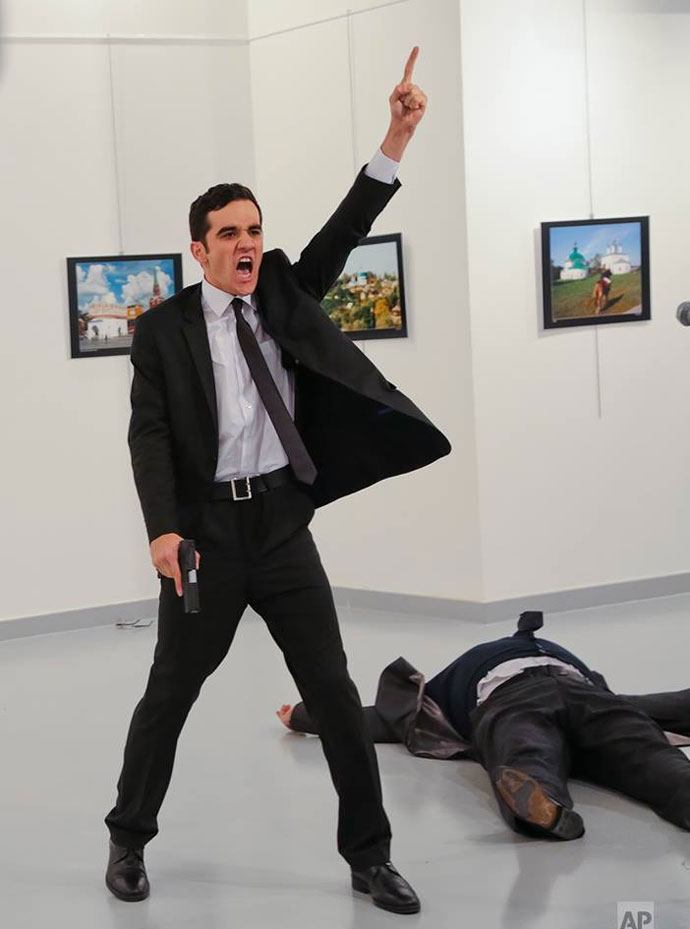 An image of our troubled times. (Photo credit: Burhan Ozbilici/AP)

It’s also a photograph – a handful of them from different angles, captured by two Turkish photojournalists (Burhan Ozbilici/AP and Hasim Kilic/Hurriyet-Reuters) who just happened to be covering the photo exhibition – of tragic serendipity.

Altintas, in his black and white bodyguard uniform, shooting the unarmed 62-year-old Russian envoy in a marked political assassination aimed to tilt the Turkish-Russian détente, but mostly, to avenge Syria in some incomprehensible manner, to etch the Syrian grief in our febrile minds – is a shocking reminder of the absolute breakdown of the very idea of security and conflict.

His last words, part Arabic, part Turkish, resonated with the monumental tragedy that he witnessed from a distance: “We are those who have given a pledge of allegiance to Muhammad that we will carry on Jihad as long as we live. God is great. Don’t forget Aleppo, don’t forget Syria. As long as our towns are not safe, you here will not taste security. Back off. Back off. Only death will take me away from here. Call the police.”

Here it was, the death wish. The killer wanted to be killed, and perhaps be delivered from his pain. Before the assasination: Karlov speaks at a photo exhibition in Ankara moments before the gunman (seen rear left) opened fire on him. (Photo credit: Burhan Ozbilici/AP)

It was almost a scene from a radical theatre: Altintas holding the gun and screaming, at right angle to the body of Ambassador Karlov lying on the pristine floor of the Ankara art gallery, so clean and sparkling and orderly. It’s almost as if it begged a violent intrusion, a bloody upsetting of order, some kind of an equivalence, unjust and unlawful, obviously criminal, but eerily unstoppable.

Ironically, Ambassador Karlov, before he was shot, was longingly narrating how Turks over the years have encountered Russian cities and terrains, and documented them with their cameras. A significant and pleasant presence in Ankara since July 2013, Karlov had witnessed the Turkish-Russian ties go from doldrums in November 2015, when a Russian Su-24M fighter jet was shot down by Turkish forces, to the summer thawing of relationship after Erdogan and Putin met in St Petersburg, to the eventual cooperation on Syria, finally leading on to the ceasefire in Aleppo.

Yet, both Erdogan and Putin, as well as Karlov, perhaps underestimated the rage and pain of the millions of Turkish people, whose hearts are being torn to shreds everyday by that cauldron of horror called Aleppo. With Russia heavily involved in the aerial bombing of the city to fight off the Syrian rebels, armed by NATO, and Turkey now seeing Russian help to fight ISIS in parts of occupied Syria, there’s blood on everyone’s hands. Contrast the scene in Ankara with the blood and gore and absolute annihilation seen in the images of Aleppo. (Reuters photo)

Contrast the scene in Ankara with the blood and gore and absolute annihilation seen in the videos of Aleppo. An 8,000-year-old city, a city bearing the birthmarks of civilisation, a city that midwifed cultural rivers and housed wisdom and knowledge for over eight millennia – that city was pummeled and reduced to a skeletal horror, a ghost town of dead bodies and bombed out scaffolds.

Mevlut Mert Altintas is that unaccounted for grief, that seething sadness that isn’t bound by borders or protocols. The Syrian sentiment is spilling over, as Turkey finds itself grappling with refugees fleeing the war zone, from both the Assad regime and the rebel atrocities.

In its sixth year, the Syrian crisis has brought Russia and Turkey together, and Altintas’ impulsive/calculated act may not sever the carefully stitched up ties between Ankara and Moscow at the moment.

The image of the crime scene, the theatre of this act of international terrorism – indicates that our everyday, public spaces, our art galleries and our stadiums, music halls, news studios, libraries and universities, our schools and colleges, our courts and hospitals, our public institutions and architectural splendours and buildings, they are all infected.

It’s a virulent double infection really, wherein the contagion of the faraway conflict zones comes back to strike at the root of the deaf complacence of our collective apathy, our sheer inertia to defend human lives lost day after day, year after year. It’s also the infection in which the distinction and between the protector and the predator is utterly, utterly lost, mangled and beyond recognition.

No astute geopolitical assessment can accurately describe the deep anguish that the last words of Mevlut Mert Altintas reverberated with. We do not know if he was a Gulenist, out to embarrass Recep Tayyip Erdogan, or if he had connections/sympathies with any of the terrorist stakeholders in Syria, or if, as are some of the far-right voices within Russian commentariat saying, he was a plant by the global deep state, may be a sign of NATO seeking some action, jeopardising a still shaky Putin-Erdogan proximity.

But that’s the probable. That empirical analysis which would follow a thorough investigation into the assassination of Ambassador Andrei Karlov, would it really be able to tell us what went on in the mind of that nattily-dressed Altintas, who looked more like a Turkish model, or a dapper actor performing the play of his life?

The security breach in Karlov’s murder is really no longer the exception. It’s now the new normal. Even though we enforce barriers and spend an inordinate amount of resources “securing” some parts of the world, parts like Europe, America, affluent sections of Asia, we are complicit in utter and absolute obliteration of peoples and places in the Middle East and North Africa.

There has been a spate of attacks on Turkish cities, like Istanbul, Ankara, among others. These, when compared with bloody massacres in European metropolises, such as Paris, Brussels, Berlin, Nice, etc, mean that the violence can never be confined to a “conflict zone”.

It would spill out, spill over.

Syria is not just a conflict zone; it’s a metaphor for pain. It’s a state of mind, a state of mind that Mevlut Mert Altintas had when he shot dead Andrei Karlov.

It was a suicide mission. And a sign of times to come.

Also read: Why truth is a casualty in Syrian War

Post your comment
#Photography, #Russia, #Turkey, #Syrian Crisis
The views and opinions expressed in this article are those of the authors and do not necessarily reflect the official policy or position of DailyO.in or the India Today Group. The writers are solely responsible for any claims arising out of the contents of this article.