Where are the women judges in India's courtrooms?

Does a handful imply the opposite sex is incompetent?

The Supreme Court on April 11 frowned upon the practice of barring women between the ages of 10 and 50 years from the Sabrimala shrine in Kerala, asserting that religious practice and tradition could not be allowed to dent constitutional principles and values.

Questioning the validity of tradition which has been under attack from feminists and others, a bench of Justices Dipak Misra, V Gopala Gowda and Kurian Joseph said temple was a public religious place and it must observe the constitutional values of gender equality.

Such strong statements by the learned judges prompted the author to visit the websites of the Supreme and five key high courts to ascertain the extent of gender equality in the judiciary. Here is the status as on April 12, 2016. 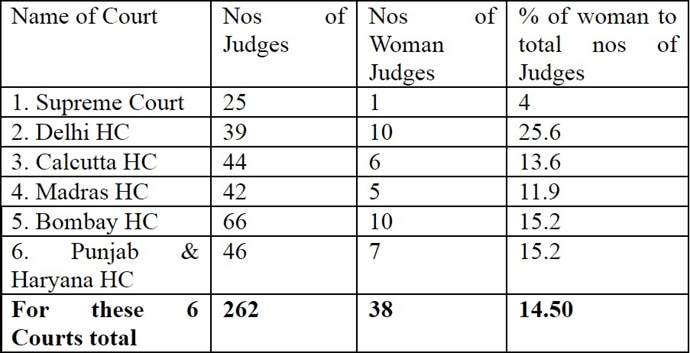 Of the select courts, the percentage of women judges in Delhi High Court is the highest. Could the collegium system of the Apex Court find one only competent woman to be a judge? Did you know that from "1950 to November 2015 only six women became Supreme Court judges out of a total 229 judges appointed?"

India has had a woman prime minister and president but never a woman chief justice.

A November 2015 India Today report shares some interesting facts, "There are just 62 (9.2 per cent) women judges compared to 611 male judges (in high courts) in the entire country. In 24 state high courts, nine HCs did not have a single woman judge. Three high courts had only one woman judge." Is this a case of gender discrimination or does it imply that only male judges possess the best legal brains and women are incompetent?

Look at the number of women doctors in our country and compare them with the number of women judges. Some might argue that women have taken to education recently in larger numbers. This is not true. Women in this country began taking to modern education even before independence and the pace picked up thereafter in virtually all fields, for example, the author's mother and mother-in-law became doctors in the mid-1950s in Punjab and Madhya Pradesh respectively.

It can be argued that in the medical discipline, women doctors succeeded because they ran their own clinics or worked in hospitals where they did not need to navigate organisational politics. Fair point. All the more reason why India needs more women judges. Since they are grossly under-represented in terms of numbers, there is a clear case for affirmative action (not reservation). Certainly, there are enough women lawyers in all high courts who can be elevated to the bench.

According to a November 2015 Mail Today report, when a five-judge Constitution bench headed by Justice Khehar was in the process of inviting suggestions to improve the collegium system for the appointment of judges, a large number of female lawyers complained of "gender discrimination" in appointment of judges to higher judiciary.

I am inclined to respectfully disagree with this line of questioning. When under-representation of women in the judiciary is universally accepted, is it correct to compare the ratio of female to male advocates? Was the percentage reservation for schedules castes and tribes based on their population numbers or supposed backwardness?

Further, women lawyers told the court that would not be a fair criteria. "Please do not compare the number of women lawyers at bar and juxtapose it with the ratio of female and male judges. Women were allowed to practise in court only in 1922. Women face a lot of problems in practising in court. Despite that, they are coming out in large numbers to practice," said senior lawyer Mahalakshmi Pavani representing the Supreme Court Women Lawyers Association (SCWLA).

At the same meeting SCWLA also represented, "It is submitted that keeping the Article 14 (right to equality) and Article 15(3) (the power of the State to make special provisions for women and children) of the Constitution Of "India is a signatory to Conventions on Elimination of Discrimination Against Women (CEDAW), 1979, which envisaged removal of obstacles of women's public participation in all spheres of public and private lives."  The source of Article 14 lies in the American and Irish constitutions. Before we get into the question of gender equality, we have to answer some fundamental issues on the Justice system and fundamental flaws relating to its practice in India.

1. How adapted is a British system of justice to an Indian culture, ethos, identity and practice? Is the understanding of gender equality the same in Indian and Western societies? Let me elaborate. It is a long term fundamental flaw in our system, which has not been addressed or has perhaps not even entered the consciousness of our western educated judicial practitioners. While all humans are created equal, it does not mean they are the same. Same and equal are two completely different concepts.

Why India? It is the same worldwide. In Hindu philosophy, we say the soul of men and women does not have gender in its spiritual state. But for practical purposes, two sexes are created based on physical differences by the Gods. These differences at times have to be respected and catered to just like there are separate toilets for men and women. By doing so it does not mean we are disrespecting and abusing the notion of equality.

2. Now coming to the issue before the Apex Court on whether the current practice at the Sabrimala shrine, of barring women between the ages of 10 and 50 years, should be changed. Hindu Goddesses have a wider following than Hindu male gods in many parts of the country. In the same vein there are certain religious places that are men exclusive and in equal breath there are certain temples that are women exclusive.

There exists a women-only temple in Kerala.  While 95 per cent of the temples are common to both sexes please understand that Hinduism treats both equally, and that does not mean that each and every function on earth has to be the same. At times for reasons of tradition, certain things are male specific and equally certain things have to be reserved for women. This is a fundamental difference between Indian and western thought.

If courts want to still force the issue of gender equality despite the arguments above they should do so. But keep in mind that the courts have to apply the law equally to all religions. That then would be real justice. The suggestion is either create a level playing field, or if the argument is that every community has its uniqueness, then let them cherish their uniqueness. You cannot have different rules for different people in the eyes of the law. We are repeating the mistakes made earlier by using British concepts of secularism and minorityism!

Are we willing to look within and change?

PS The author admires the judiciary for its role in exposing corruption and has full faith in its abilities to address issues in a fair and balanced way.

1. Let us not make men out of women

2. Why secularism is not an Indian Concept

3. Why India must have no place for religious minority

4. Worship of God as Mother in Indian Tradition

5. What India can learn from Vidya Balan

#Sabrimala, #Equal Opportunity, #Gender Equality, #Women
The views and opinions expressed in this article are those of the authors and do not necessarily reflect the official policy or position of DailyO.in or the India Today Group. The writers are solely responsible for any claims arising out of the contents of this article.