This is the first major law and order crisis for Uttar Pradesh CM Yogi Adityanath.

Riots are not new to Uttar Pradesh nor its politicians. In a state with a long history of communal unrest, politicians here needn't be told that hate politics leads to violence. Yet, all political parties blatantly played the caste and religion card during the recent Uttar Pradesh elections.

The riots in Saharanpur are very much a result of that divisive politics of Uttar Pradesh.

For Yogi Adityanath — who was propped up as the state's chief minister by the BJP with the promise of Sabka Saath, Sabka Vikas — Saharanpur is the first major law and order crisis that once again threatens to lay bare the fragility of BJP's politics of inclusive development. Interestingly, one of the main claims of the Yogi government has been to improve the law and order situation in the state.

The divide between communities and castes run deep and dark in Uttar Pradesh. And the examples are far too many. From Hashimpura in 1987 to Muzaffarnagar and Saharanpur in 2013 and 2017 respectively, western Uttar Pradesh for decades has remained a tinderbox of communal and caste violence. And politicians (both fringe and mainstream) continue to nurture their ambitions by turning stray incidents into riots. 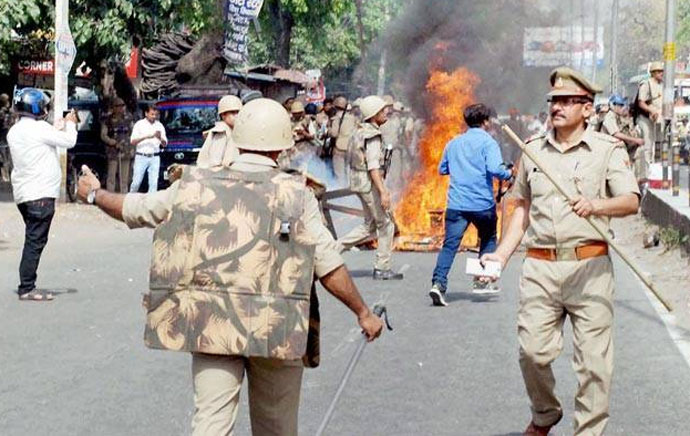 It's the same caste and communal politics that keeps the cauldron of violence burning.

All those eulogising that BJP's "social engineering" during the Assembly elections paid rich dividends must know that the party may have mastered the art of caste politics, but it's the same caste and communal politics that keeps the cauldron of violence burning.

The party no doubt managed to design a model to defeat the caste champions Samajwadi Party in its own game on its own turf, but has not managed to take everyone along.

Let's us recall what transpired in Muzaffarnagar in 2013, when scores of people died and thousand others were rendered homeless. How a pitched battle was fought between two communities. Hospitals were flooded with mutilated bodies and charred remains making it almost impossible whether to recommend burial or cremation. The violence continued and spread to other rural pockets. The rumour mills continued to churn out gory stories inciting further violence.

The political class — proclaiming to be champions of a particular community — reaped a rich harvest by ensuring that the divide gets deeper. Had this not been true, DVDs of Muzaffarnagar riots showcasing one man as the "hero" would not have been distributed in the run-up to the Assembly elections. That was with the sole intent of politics of consolidation.

Also, the Muzaffarnagar violence could have been quelled had political parties not fanned an eve-teasing incident and triggered further clashes. Not a single party actually tried to provide a healing touch. The police too was either on the offensive or in damage control. As a result, thousands of people were left stranded in relief camps with deep scars to haunt them all through their lives.

What started in Saharanpur since April this year was being overlooked. The political class was busy celebrating shobha yatras and birthdays (jayantis) of icons that the state had not seen in the past. This could have been the rallying point for one caste or community, but the intent reeked of malafide designs.

Politics of polarisation has always been a favourite to win elections. Had that not been true, the likes of Sangeet Som and Yogi Adityanath would not have rose to prominence with hate speeches.

If an election is conducted in Uttar Pradesh today, a Muslim-Dalit combination in western UP can work miracles for any party, isn't it? Does that explain why Mayawati defied the recent "prohibition orders" and chose to pay a visit to the trouble-torn Saharanpur?

Did she go to apply the soothing balm or was it an attempt to bring back sections of a community to her side? The deputy CM of UP, Keshav Prasad Maurya, when quizzed by an India Today reporter on why Saharanpur was still simmering, asked a counter-question, "Where is it simmering?"

When asked about allegations levelled against Mayawati's brother over his links to Bhim Sena (as pointed out by intelligence agencies) he again put a counter-question. "Why did Mayawati go to Saharanpur when the administration had not given the permission for it? What was her intent?" he added.

These can be seen as deflection tactics, but even former chief minister Akhilesh Yadav sent a fact-finding team to Saharanpur and held press conferences on the Samajwadi Party delegation's findings.

The Bhim Sena certainly has reasons to feel that it too could rise to prominence looking at the state's history.

The BJP government must know that mere transfers and suspension (of officers) or curtailment of internet services won't defuse the tension (the Bhagalpur riots spread even though social media and internet had not reached that part).

What is needed is an honest analysis of the past for a solution to present and future violence.

The BJP may have won the elections, but has seemingly failed to keep happy different social segments.

#Yogi Adityanath, #BJP, #Saharanpur riots, #Western Uttar Pradesh
The views and opinions expressed in this article are those of the authors and do not necessarily reflect the official policy or position of DailyO.in or the India Today Group. The writers are solely responsible for any claims arising out of the contents of this article.