How Salwa Judum is making a comeback in Chhattisgarh

StoriesUnscene tries to visualise how a conversation between Chhavendra Karma and an agent representing the corporations must have arrived at this plan of action.

The Salwa Judum launched in 2005 in the Bastar region of Chhattisgarh has gone down as one of the most notorious counter-insurgency campaigns of post-1947 India. The governments of state and Centre joined together to arm an unlawful mercenary force of landlords and their henchmen that terrorised the local tribal population who supported the Maoist movement. Villages were burnt down, hundreds were murdered and raped, and 3,50,000 were forced out of their homes, and it was only in 2011 that the Supreme Court declared that the Salwa Judum was unlawful and that the state support for it was unconstitutional. Its main leader, the landlord politician, Mahendra Karma, was himself killed by the Maoists in 2013.

Now two years later, his son, Chhavendra, has created a furore and a new wave of fear in the area by announcing that he intends to launch part two of the Salwa Judum. Many are asking the question: why does Chhavendra Karma want to now relaunch something which has not only failed miserably but has also been prohibited. StoriesUnscene decided to go behind the rhetoric of Salwa Judum 2.0 to find out the motivation and support behind it and the corporate forces that mainly stand to gain from a new reign of terror. We try to visualise how a conversation between Karma and an agent representing the corporations must have arrived at this plan of action. 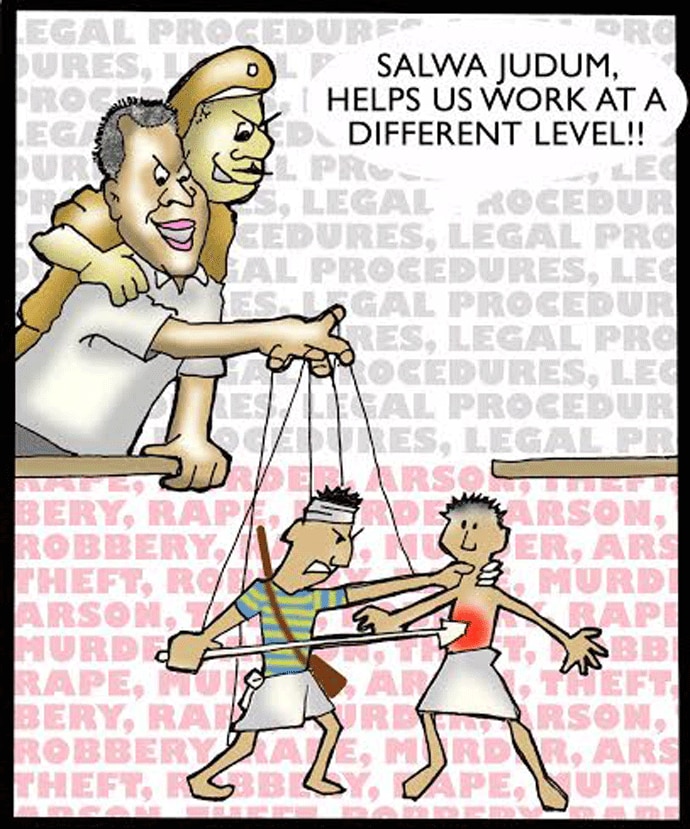 Corporate agent: Namaste Shri Karma! How do you keep busy these days?

Chhavendra Karma: What to tell you Shethji. Forget about me, I'm worried about my boys. After the collapse of Salwa Judum, nobody is giving any funds and all my boys are deserting me. If this goes on for long I won't have any body left.

Agent: That's not good. There's lots of work to be done. And lots of money to be earned. So many big companies are ready to spend thousands of crores - just two projects are worth 24,000 crores. They know they can make hundred times more in profit.

Karma: But we don't see any of it. Nothing reaches us. Don't you want the locals to develop.

Agent: Of course, of course! You local landlord guys should do well. You are our main support and we will definitely give you something. But the big bosses want results. The land has got to be cleared no. if your villagers are allowed to stand in the way how can we get profits?

Karma: They think their whole livelihood will be destroyed.

Agent: See Karmaji, both you and I know that there cannot be development without pain. Someone has to suffer. No construction without destruction. Vikas requires Vinash. Destruction of hundreds of villages and lives of lakhs of villagers may take place, but think of how many billion dollars of construction will take place. Tata, Essar, Jindal, Mittal, all ready to put money - even big American capitalists like Texas Pacific Group. If people like you handle things properly, your earnings will be in hundreds of crores. But the villagers shouldn't be selfish and stop development. They should quietly leave.

Agent: That we know. They are even forming their own government. But our government is making arrangements. Number of para military is being increased. Big part of Abhujmaad is being handed over to the military. If people start opposing the military, then the air force will have to help them. Drones are anyway there. All means will be used. No one should be allowed to stand in the way of development after all. Do you know how the USA became the most developed country? They did not allow some few lakh tribals to stop them.

Agent: Why do you think I came to you? Your father's work must go ahead.

Karma: Aah, but that Supreme Court will also create trouble.

Agent: That too can be seen too. Last time we made a mistake and didn't give that enough importance. This time we'll see that all that is arranged. Companies will even be ready to put some crores to buy the cleverest lawyers.

Karma: But do you think these parties have guts to fight in the open. Even Congress, my own party may not support me. And who can trust the BJP!

Agent: Parties no need to worry. My bosses will see to that.

Karma: This will all cost money. My boys like to enjoy …and they need modern arms and equipment.

Karma: (eyes lighting up) I will be responsible for proper usage of the funds. We will see that all the iron ore hills from Raoghat onwards are cleared of all villages. Along with the Bastar region we will also develop Rajnandgaon and Gadchiroli. And this time we will see that everyone sacrifices for the sake of development. We will call ourselves Vikas Sangharsh Samithi. We will do the Vinash necessary to attain Vikas.

(And this is how the idea of Salwa Judum 2.0 was conceived.)

#Chhavendra Karma, #Maoists, #Chhattisgarh, #Mahendra Karma
The views and opinions expressed in this article are those of the authors and do not necessarily reflect the official policy or position of DailyO.in or the India Today Group. The writers are solely responsible for any claims arising out of the contents of this article.