Why is the Saraswati river ‎such a heady cocktail of faith, science, history and politics?

Maybe it is better to let the river remain "antarvahini" and "gupt" and not make it manifest itself.

When you wake up to a dramatic newspaper headline saying "Saraswati river sprouts to life after 4,000 years" - it is natural to sit up and take notice of a development that promises to be of historical and religious significance.  The Saraswati river, after all, has been described as the "greatest of mothers, greatest of rivers and greatest of goddesses" in our Vedas.

Yet, I read the article with an ennui of a journalist who has been a long distance runner - been there, seen that. The story says that the Haryana Assembly Speaker and Yamunanagar Deputy Commissioner rushed to the spot this week and tasted the water. The article in Mail Today on Saturday also says the Haryana government will try to revive the Saraswati river by diverting water from the Somb river too.

In 2003, I too went to Adi Badri, Yamunanagar with a team of Saraswati-seekers who pointed to a thin stream and a puddle and exclaimed it was the mighty Saraswati river that used to come from the Himalayas and flowed into the Arabian Sea. Now they are claiming that again. 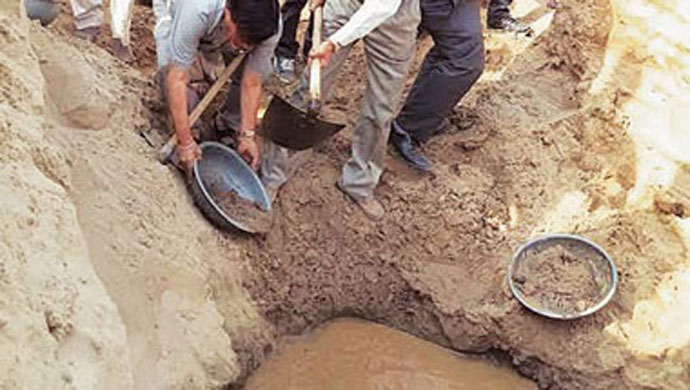 In our collective memory the Saraswati river was once mighty. Just like our civilisation was.

A special national team - comprising of glaciologists, archaeologists, remote sensing experts, historians, - was set up by the Atal Behari Vajpayee government to hunt for the river that our ancient scriptures claimed had dried up and disappeared from thousands of years ago. Armed with NASA maps from the 1970s that showed signs of channels of water in northern and western India, the team began digging for the river. Everytime they found ancient clay artifacts along the NASA map route, the archaeologists told me this was indeed the Saraswati river, the site of ancient settlements. Our ancestors had written the Vedas sitting on the banks of this river, they said. What bolstered their claim was that in 1998, groundwater experts dug wells along this route and had found potable water, even in the desert.

It is easy to get swayed by this heady cocktail of faith, science, politics and history.

In fact, the Vajpayee government had even said they would set up a trail of museums along the unearthed river and call it Indus-Saraswati Civilisation Site Museums. In the National Museum in New Delhi, the government had tweaked the introductory text panels at the Harappa gallery to call it Indus-Saraswati Civilisation. Banners of traveling exhibitions were changed overnight.

Why is this change of name important? Why do we turn into Saraswati-seekers everytime the BJP comes to power?

Is it to summarily push aside the Aryan migration theory of early historians? To prove that Aryans were indigenous, and in fact they were the same as and contemporaneous with Indus Valley people. This effort will help push back the age of the Vedas from the widely held date of 1500 BC to 3000 BC.

It is not merely a juggling of history and historical interpretation or re-arranging of books on a library shelf. This effort helps shape and strengthen a certain kind of political narrative too - about religious cultures that are truly Indian, and of the soil.

"Antarvahini" is a Sanskrit adjective for Saraswati river - it means that which flows beneath the surface. It has also been called "gupt" river, or the hidden river.  So thousands of years after it is believed to have disappeared, the hidden river continues to contest our quest for identity.

In our collective memory the river was once mighty. Just like our civilisation was, compared to our uninspiring present. So it is natural that we are digging breathlessly and budgeting crores of rupees to tag a small stream with the attributes of historical grandeur.

But coming back to the newspaper article about Saraswati river today, here is something truly ironical. Another story in the previous page of the same paper is titled "Defiling Yamuna will cost you dear."

Look what we have done to the Yamuna river. Maybe it is better to let Saraswati river remain "antarvahini" and "gupt" and not make it manifest itself. We may turn it sully too - literally and metaphorically!

#Haryana, #Saraswati river
The views and opinions expressed in this article are those of the authors and do not necessarily reflect the official policy or position of DailyO.in or the India Today Group. The writers are solely responsible for any claims arising out of the contents of this article.