Government is about to endanger India's sari tradition

The repealing of the Handloom Reservation Act, if successful, will ensure that our handicrafts lose their unique identity.

The art of hand weaving in this subcontinent is a continuous narrative of cultural and historical exchange. More often than not, history tellers obfuscate the other side of this ancient tradition - one that is hard-hitting, and concerns not just who delight in the work of the weavers but the harsh realities of weaving livelihoods. With the coming of power looms and sturdy processes of producing handicrafts, the traditional mode of creating handiwork has been subjected to sufferings owing to its "inability to compete with power looms". From time to time, class politics has entered this sphere to interfere with the four point three or more million workers who earn their bread through the handloom industry. A classical debate between tradition and modernity has carried on for decades now, the handloom sector is accused of being "unorganised", "slow" and hence needs to be "modernised" for meeting public demands. Meanwhile, other statistics from designers, entrepreneurs, NGO workers across the world and the country state that there is an ever-increasing demand of handwoven crafts, especially among the young crowd who are aware of sustainable fashion and current dying trends.

In the 1985 Handlooms (Reservation of Articles of Production) Act, it has been mentioned clearly that articles exclusively reserved for handlooms shall not be produced by any other sector. The illegal breach of this Act is most visible in small towns of India, where power loom-made cloth is sold everywhere in the market for cheaper rates and the buyers tricked, as the designs closely resemble the handwoven work. This kind of contravention is very much in the interest of the power loom lobbyists and the elite aesthetic of art they define. Instead of probing this matter, the government has now back scratched the lobbyists by coming up with a "solution" - since the handloom industry cannot compete with the power loom production, it's better to repeal the Act. 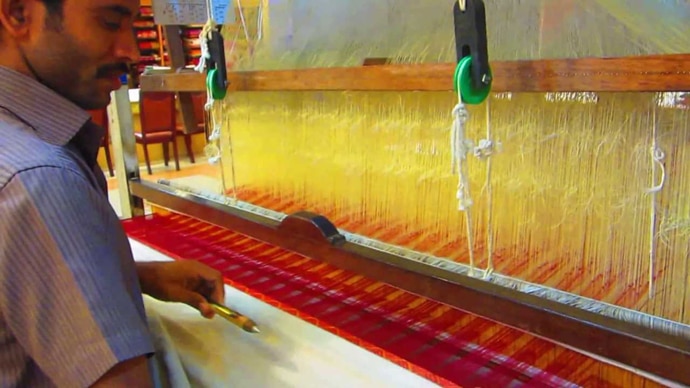 One may note the elitist nature of such a move and the indolence with which the jurisdiction runs. There have been no transparent government records to show how many people have been allotted secured livelihoods for toiling day and night in the handloom/power loom/mill sectors. Then, with the coming of private companies, there are middlemen/women who do the transactions on behalf of those weavers and artisans, thereby denying them their right to profits. As some of these weavers and artisans are not very well educated, they are cheated by the lure of power loom sector jobs. It is tragic that rural weavers are not considered "modern" enough for their handicraft skill, many families who earlier had a handloom project of their own (which they would market in the nearby haats) had to abandon it due to the enterprise of huge power looms. Kirron Kher, while pleading the government to look into the impoverished livelihood of weavers, especially women, exposed the fact that the cry for handloom reservation isn't loud enough. She gives the example of the sari - a garment which is loaded with everything that is the quintessential Indian woman, and asks a simple question - What shall happen to this country's so-called "tradition" if more than half the weavers are not allowed to produce the sari?

As per records, 70 per cent of the country's women wear the sari (recently, in social media, we saw #100Saripact trending, with many women willing to revive the sari and deciding to wear it 100 times before the end of 2015). The sari is draped in various ways - this diversity is manifested in its designs, raw material, threadwork, et al. The Brocade (Banarasi sari), the Sujani sari, the Garhwal sari, the Sualkuchi silk sari, the Bandhani sari, the block print sari, among others require intensive handwork. What's more, the workers take extreme delight after the sari is complete - it is, after all, a testimony of their skill. Thus, the elite motto of "the mechanised are the skilful" needs to be defeated, and defeated very soon. India's indigenous textiles are already facing severe constraints with the coming of private companies and they clearly do not need any more lobby politics.

Jonali Saikia, as an entrepreneur with Heeya sarees, has been trying her best to bring textile innovations from lesser known communities. She is pained at the minority representation of the handloom sector to fight against the power loom lobbyists. She states, "The Patola and Mising design (extra weft) work that cannot be replicated by power loom will kill the newer innovations with the sari. Secondly, the leitmotifs produced by artisan groups that has immense potential for livelihood will be destroyed forever". The repealing of the Handloom Reservation Act, if it is successful, will categorise all textiles into one, thereby obliterating the line between what is handmade and what is not. This will not just be a move to rob us of what we wear, but a training to make all of us wear the same clothes, (in other words, create nothing unique). Further, this will ensure that we have nothing called identity difference, and that makes it easier for these lobbyists to play the game of money, power. The limitation of the definition of handloom is also a myopic one, for there must be equal attention paid to preservation of other handicrafts, the artisan work, pottery, embroiderers et al.

Free reign of power loom will then allow cultural hegemony over India's textiles, which will homogenise a very miscellaneous tradition of the country. And if this is the case with sari, I can't imagine the plight of the interiors of the nation, where other kinds of handloom garments are worn, cherished, woven and passed on to the next generation as memories. Let us think about this with a modicum of selflessness, for a change.

#Handloom Reservation Act
The views and opinions expressed in this article are those of the authors and do not necessarily reflect the official policy or position of DailyO.in or the India Today Group. The writers are solely responsible for any claims arising out of the contents of this article.