The battle for Amma's legacy just got more intense. Contrary to belief that the Mannargudi family will not risk a loss in the by-election to the Radhakrishnan Nagar Assembly constituency, the seat in Chennai now vacant after Jayalalithaa's demise, TTV Dinakaran has decided that fortune favours the brave. He would hope to find favour with RK Nagar's voters as well.

Dinakaran is confident - or perhaps even overconfident - of his chances. He predicts a victory margin of 50,000 votes. Cocky, considering even Jayalalithaa won the 2016 election from RK Nagar by 39,000 votes. To believe that he will increase the margin when the AIADMK vote during the election on April 12 will be splintered with three claimants to the Jaya legacy, is either a case of self-deception, or, lack of understanding of basic math.

Dinakaran will be up against Jayalalithaa's niece, Deepa, who started her outfit MGR Amma Deepa Peravai (organisation) last month. While there is some amount of public support for Deepa, with people taken in by her resemblance to her late aunt, making a successful electoral splash will be a different ballgame. With no party organisation, leave alone booth-level committees and lack of experience in fighting an election, Deepa will be at a disadvantage, unless she ties up with the O Panneerselvam camp to fight the by-election together. 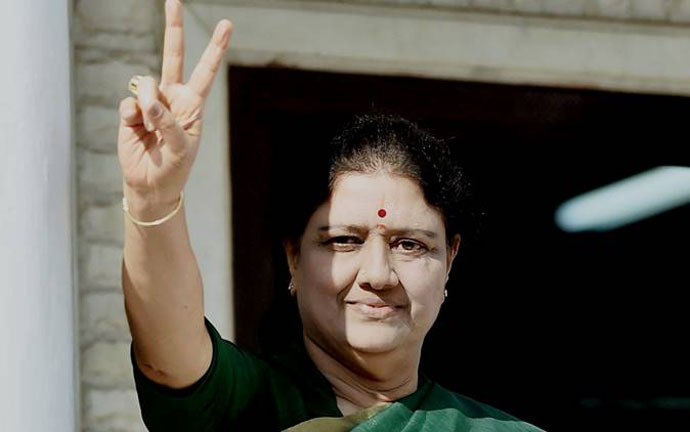 This election is now about Dinakaran, and by extension, Sasikala.

So far, Team OPS has played its cards close to its chest. It is focusing its energies on getting VK Sasikala disqualified as general secretary of the AIADMK by the Election Commission. If it succeeds, this would mean the appointment of Dinakaran as her deputy, which was her last decision before she went to Bangalore jail, will become null and void. The other mission is to secure the two leaves symbol for itself. The faction that gets the symbol will have a definite advantage in this Amma of all by-elections.

What the DMK would bank on to an extent is the fact that compared to other districts in Tamil Nadu, the party did better than the AIADMK in Chennai in the 2016 elections. It won 10 of the 16 seats in the city, primarily because of the resentment against the ruling party for the manner in which it failed to act during the Chennai floods of December 2015.

Though the DMK would fancy its chances in a multi-cornered contest, it is easier said than done. For one, a DMK candidate has not won from RK Nagar since 2001 and the constituency has traditionally favoured the AIADMK in most polls. In a surprise move, the party has fielded a low-profile lawyer Maruthuganesh as its candidate about whom very little is known outside party circles in the constituency.

The selection of the candidate has raised eyebrows, also because MK Stalin has appealed to other Opposition parties to support the DMK's choice to avoid splitting of the anti-AIADMK vote. This indicates that the DMK is banking more on arithmetic, rather than a connect with the voters and genuine support for the party, to romp home.

But this election is now about Dinakaran, and by extension, Sasikala. Deepa and OPS will go to town reminding the electorate that he is the person who was thrown out of Poes Garden by Jayalalithaa in 2011 and never taken back so long as she was alive. It promises to be a no-holds-barred election campaign, with a generous dose of personal attacks.

Dinakaran wanted to become a minister in Edappadi Palaniswami's Cabinet on February 16 but Tamil Nadu governor Vidyasagar Rao did not play ball. Rao pointed out that he will have to seek legal opinion on Dinakaran's entry into the ministry given that he has been found guilty of money laundering and benami transactions in a 1996 case. This January, the Madras High Court upheld a penalty of Rs 25 crore imposed on him by the Enforcement Directorate. Following which, Chief minister-designate Edappadi Palaniswami dropped Dinakaran from his list of ministers.

Though Dinakaran has, for now, denied any intention to become chief minister should he win from RK Nagar, the possibility cannot be ruled out. Having taken over Poes Garden and the AIADMK, Jayalalithaa's constituency and her government remain the two frontiers yet to be conquered directly.

As far as OPS is concerned, this will be the election that could settle his political fate. Since his dramatic revolt on February 7, OPS has received significant support, atleast on social media. The verdict on April 15 will show if that show of hands in the virtual world was for real.

Post your comment
#O Panneerselvam, #Jayalalithaa, #Sasikala, #Tamil Nadu
The views and opinions expressed in this article are those of the authors and do not necessarily reflect the official policy or position of DailyO.in or the India Today Group. The writers are solely responsible for any claims arising out of the contents of this article.