'Save Sabarimala' Rath Yatra: Is BS Yeddyurappa the new LK Advani of South?

The former Karnataka CM's rath yatra is believed to be a last-ditch attempt by the BJP to 'conquer' the South in 2019.

The row over the entry of women between 10 and 50 years of age into Sabarimala temple is becoming increasingly political.

Former Karnataka Chief Minister and BJP leader BS Yeddyurappa on Thursday (November 8) embarked on a 22-day ‘Save Sabarimala Rath Yatra' to “protect the traditions and rituals” of Lord Ayyappa shrine. The yatra, which started from Madhur Siddhi Vinayaka temple in Kasargod district, will pass through districts across the state before culminating at Sabarimala on November 30.

#Sabarimala Rath Yatra that begins from Mattur today will reach Sabarimala on 30th. Our culture has always given prominence to women&treated them with respect. It's all because of Kerala govt&its failure to handle the case before SC that situation has become tensed:BS Yeddyurappa pic.twitter.com/QLIzboLdG7

The move by the Lingayat stalwart is being seen as an attempt at walking in the footsteps of BJP veteran LK Advani.

It was exactly 28 years ago when the then BJP president took out his Ram Rath Yatra to garner support for the 'Ram Mandir' movement, setting off a chain of events that resulted in the demolition of the Babri Masjid two years later. Advani's rath yatra — that began on September 25, 1990 from the holy city of Somnath in Gujarat — was planned to pass through the states of Gujarat, Maharashtra, Andhra Pradesh, Madhya Pradesh and Bihar, before reaching the city of Ayodhya in Uttar Pradesh on October 30. The rath yatra by Lingayat stalwart BS Yeddyurappa is being seen as attempt at walking in the footsteps of BJP veteran LK Advani. (Credit: Twitter)

However, it came to an abrupt end on October 23, after Advani was arrested by the Lalu Yadav government in Bihar and sent to preventive custody. 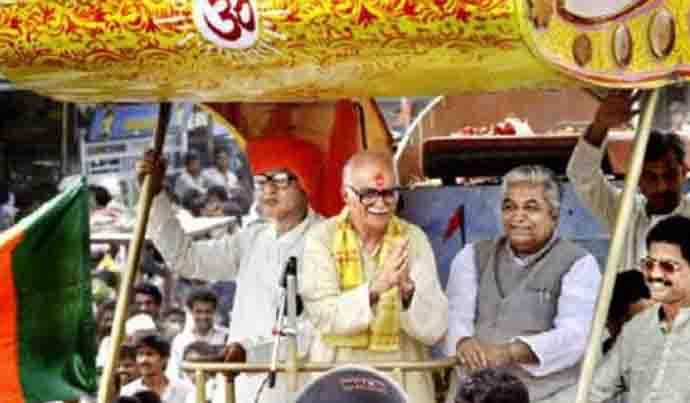 It seems more than a coincidence that Yeddyurappa flagged off his rath yatra on a day when LK Advani celebrated his 91st birthday.

Advani's rath yatra is remembered for two reasons — the demolition of Babri Masjid on December 6, 1992 and the rise of the BJP to power in the coming years.

The BJP seems to be trying to garner a similar support over the Sabarimala issue from all Hindu nationalist organisations. Just like Advani was arrested during his Ram Rath Yatra, there are apprehensions that Yeddyurappa too might face arrest by the Left government in Kerala before he reaches Sabarmiala.

Even though the judgment was initially welcomed by certain sections of society for upholding gender equality, women who attempted to enter the temple faced extreme resistance from devotees.

While the Left Democratic Front government of Kerala vowed to implement the Supreme Court verdict, the BJP and the Congress have backed devotees who have been protesting against the judgment, citing violation of tradition.

While flagging off the rath yatra, Yeddyurappa said, “Our culture has always given prominence to women and treated them with respect. It's because of the Kerala government and its failure to handle the case before the Supreme Court that the situation has become tense."

The former Karnataka chief minister further claimed that 90 per cent of women are opposing the entry of women of menstrual age in the shrine. "It is high time that the Kerala Chief Minister takes necessary action and approach the Supreme Court to stop the entry of women to the temple. Our party is not opposing the Supreme Court's verdict, but people's emotions should be respected," Yeddyurappa said. Self-proclaimed devotees, which included many women, stopped each and every car heading to Sabarimala. (Photo: Reuters)

Ahead of the 2019 Lok Sabha elections, the BJP is desperately seeking to make inroads into the southern states. While the party’s citadel in Karnataka has already collapsed, its presence is negligible in Kerala.

Yeddyurappa’s rath yatra, many believe, is a last-ditch attempt by the BJP to 'conquer' the South to return to power at the Centre in 2019.

#Sabarimala, #BJP, #Save sabarimala rath yatra, #BS Yeddyurappa
The views and opinions expressed in this article are those of the authors and do not necessarily reflect the official policy or position of DailyO.in or the India Today Group. The writers are solely responsible for any claims arising out of the contents of this article.