Faesal has touched many hearts by his sacrifice of a promising career as a top bureaucrat ahead. We need to listen to this unusual young man.

Like it bewildered many in Kashmir, Shah Faesal’s decision to quit from a prestigious and lucrative service like the IAS left me nonplussed as well.

As a young reporter, I used to live in the North Campus area of Delhi University. A bunch of people like me who were just out of college and literally buds in their respective professions had rented an apartment.

It was a student neighbourhood and living together was affordable for struggling young folk like us. Just a few kilometers away, in Mukherjee Nagar, were a number of civil service coaching institutes. The buildings next to ours used to be full of aspirants for these services. It was interesting to watch them. These youngsters would hardly talk to anyone; they would mostly be inside their rooms.

Soon we realised that many of them had appeared a few times and hadn’t given up yet. They cramped themselves in one place – mostly single rooms – and would just study and do nothing else. We would also occasionally hear stories of some of these aspirants having tried to commit suicide when they would fail at the last stages of their exams. Crammed: Getting into the civil services isn't everyone's cup of tea. (Photo: PTI)

I was never inclined towards the civil services. You could call it my lack of ability or anything else, but looking at these people, I knew this wasn’t my cup of tea. It was certainly arduous and required a lot of grit.

So, when one gets to hear about someone who not only passed the exam but also topped it, and is then willingly resigning from the service, it sounds odd.

Rumours about Shah Faesal wanting to do this were flying around in many circles for the last few months in Kashmir, but it was hard to believe till he actually did it a few days ago.

But why would he do it?

He has reasoned out his decision as a  "small act of defiance", aimed at reminding the central government of its responsibility towards the people of Kashmir whose "lives matter".

He also pointed at the growing culture of intolerance against minority Muslims in this country and the undermining of institutions like the CBI, NIA and others.

His argument is that he felt like speaking up on such issues and knew that he wouldn’t be able to do it while being in the service. Hence, he had to leave it. He has also clearly mentioned that his life is for the people now and hinted that he would like to join the electoral politics of the state.

That is, however, a tricky area in the Valley.

There is no doubt in the fact that a huge question mark exists when it comes to mainstream politics in Kashmir. Anyone who so much as even gets remotely associated with it is branded as a traitor of the ‘Kashmiri cause’. And somewhere, the reason for this lack of credibility is the conduct of mainstream politicians over time. Most of them come with serious baggage.

But it is also a fact that elections have at times seen considerable participation of people, even during some of the most difficult times. Hence, it will be unfair to completely write off mainstream politics in Kashmir. 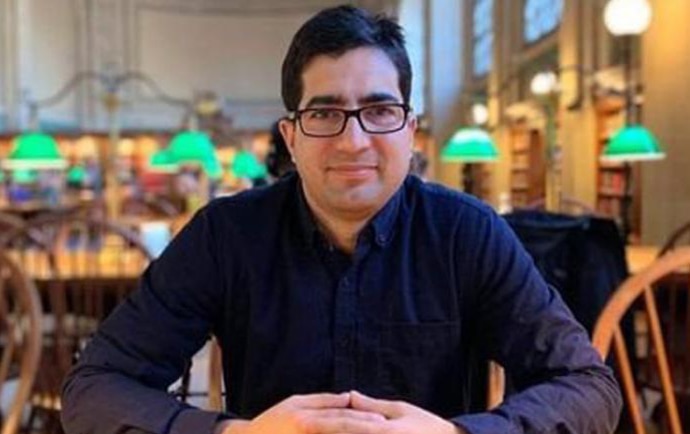 Can Shah Faesal change the face of mainstream politics in Kashmir? (Photo: Facebook)

Shah Faesal’s assertion, that he is a man from the system and would be happy to work in the same system, is a clear indication of which area he wants to work in. It is a fact that this young man isn’t here today for short-term gains or immediate power simply because he already enjoyed that and has in fact left it.

The question really is whether the people would give him a chance to do that?

A few things are pretty much out there about him. From the condition of Muslims across India to the plight of people living in his own trouble-torn Valley, he comes across as someone who has the capability of speaking and making sense on diverse issues.

He has already touched many hearts by his sacrifice of a 25 year-long promising career as a top bureaucrat ahead.

His assertion of being here to 'disrupt' existing politics is important. Which way that disruptions take him is something that only time will decide, but for now, he deserves to be heard and listened to.

Also read: Not so fast, Mr Faesal: Why IAS topper Shah Faesal's reasoning behind his resignation is unreasonable

#IAS, #Civil Services, #Kashmir, #Shah faesal
The views and opinions expressed in this article are those of the authors and do not necessarily reflect the official policy or position of DailyO.in or the India Today Group. The writers are solely responsible for any claims arising out of the contents of this article.