Post the hat-trick, there is no escaping the dragnet for the Bollywood superstar.

I fully understand & respect security with the way the world is, but to be detained at US immigration every damn time really sucks.

It was a real sense of déjà vu, a sordid one at that, for most of us who wondered how such a thing could happen with a rich, famous and illustrious Indian.

Get a grip, US! Is SRK a terrorist or a drug smuggler? 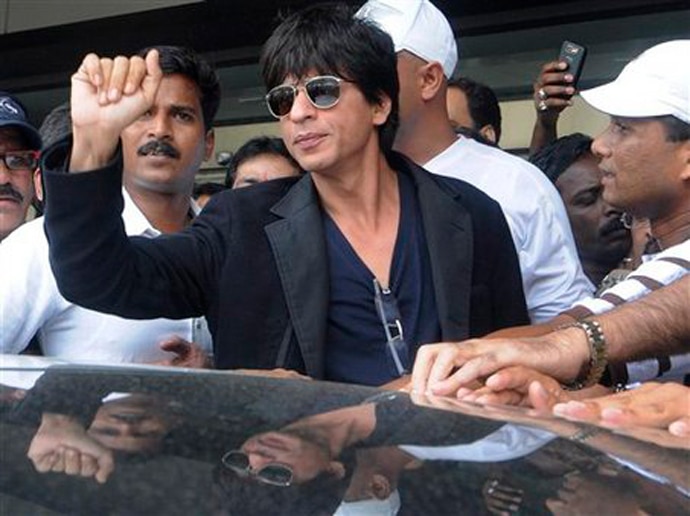 SRK is one of the most high-profile personalities of Bollywood, then why do immigration officials keep pulling him back for prolonged questioning? He was first stopped at Newark airport in the US in 2009, then at White Plains in 2012 and yet again in LA in 2016.

On the face of it, this dubious hat-trick looks grossly unfair. But if you look at the absolutely paranoid way in which the American security apparatus works, you will find that it makes perfect sense to them.

Scrutiny during visits to the US was tough as it is, more so after 9/11.

Let's understand why the US immigration office chooses to screen an individual:

1. Because your name appears in a random search.

2. Because you are behaving in a suspicious manner.

3. Because your name is flagged by their computer network.

The first scenario is plausible, but what explains SRK being held back thrice by US immigration officials? The second is highly unlikely given the stature of the public figure.

This leaves us with option 3. His name was specifically flagged! There are many theories to that. One was popularised by Bilal Siddiqi's book The Bard of Blood: The Secret War in Balochistan is About to Explode.

"Yasin Bhatkal was also one of the reasons Bollywood superstar Shah Rukh Khan was detained at the Newark airport. Bhatkal had used the alias Shah Rukh, for reasons best known to him."

If you think this is a minor issue, let me quote the case of US Senator Ted Kennedy. This famous politician, and kin of former US president JFK, was not allowed to fly because a terrorist attempted to use a "similar sounding name".

Senator Kennedy faced problems at airports for many years and was even part of hoaxes that there was a secret no-fly list that specifically kept people like him from flying due to political reasons.

Other public figures who have been inadvertently placed on a terror list include Democratic Congressman John Lewis, CNN reporter Drew Griffin, famous singer Cat Stevens and even a six-year-old!

Incidentally, US' assistant secretary of state for South and Central Asia, Nisha Biswal replied to SRK's tweet with a well-reasoned apology:

Sorry for the hassle at the airport, @iamsrk - even American diplomats get pulled for extra screening!

It is well known that SRK performs regularly at marriages and live shows abroad. There is no count of how many hosts and sponsors he has had in more than two decades of his career.

Does he check their backgrounds with due diligence? One doubts it. The cheque is all that matters. What if anyone of them has terror links, no matter how faint?

One such theory had been floating in 2009 when he was detained at Newark airport. Though popular on blogs, it was not played up by the mainstream media.

The same year he was hosted by Bollywood promoter-duo Farhath and Altaf Hussain, who were put under surveillance by both US and UK authorities.

That means SRK was not pulled up because of his links, but those of his hosts. Both theories are plausible and one must realise if you are flagged once, you will be flagged for life.

A British citizen who tweeted he was going to America to "have a blast (on a binge, as it were)" was stopped by US immigration officials over his social media activity and some differences ensued, with the result that he is now held back for questioning at airports in every country he travels to.

Another problem is that once you get into the dragnet, deeper research will follow and not all of it may work in your favour. This fact was explained by BJP leader and Rajya Sabha MP Subramanian Swamy.

He says that everyone in Bollywood has indirect terror links owing to the financing that may have come through Dawood Ibrahim. And we all know that Dawood has indirect links with many terrorists across the world.

It also doesn't help if SRK makes grand declarations like "I don't like America" and "I am little worried about Americans because they do have this issue when your name is Muslim".

Nothing wrong with that, but in the era of Google search, if these declarations come up against your name in a security computer, then bias sets in and necessitates deeper research.

After his third such encounter with the immigration officials, US ambassador to India Richard Verma too extended an unconditional apology to SRK:

Sorry for the trouble at LAX @iamsrk. We are working to ensure it doesn’t happen again. Your work inspires millions, including in the US.

Again a welcome sentiment, but nothing may come of it. SRK has already been stopped thrice and it is likely to happen again.

In My Name is Khan, SRK's reel self tries his best to meet US President Barack Obama. In real life too, SRK would do well to write directly to the US president to have his named removed from the screen-list because nobody else has the authority to challenge the immigration protocol.

There's an outside chance of the move working in SRK's favour.

Rest assured, the superstar can expect absolutely no relief if a certain Trump takes over as POTUS come January 2017.

#Terrorism, #US Immigration, #Shah Rukh Khan
The views and opinions expressed in this article are those of the authors and do not necessarily reflect the official policy or position of DailyO.in or the India Today Group. The writers are solely responsible for any claims arising out of the contents of this article.