Why Shivaji is the greatest Indian in 1,000 years

His name is firmly ingrained in the minds of diverse people across India for ages as a great Hindu king.

It is indeed rare that descendents of two national heroes come on one platform more than 300 years after their ancestors met for a national cause. It was in the late 1660s that the Bundelkhand hero Maharaja Chattrasal went to Fort Rajgadh, Chattrapati Shivaji’s capital then,  and met the Maratha hero seeking to fight under him and act against the fanaticism of Aurangzeb whose temple-destruction spree had already begun by then.

A strategically-thinking Shivaji, however, praised Chattrasal’s manly spirit, honoured him with a sword but asked him to start the anti-Aurangzeb movement in his home in Bundelkhand to build up pressure on the Mughals from on all sides. This is how Shivaji addressed Chattrasal: "Illustrious chief, It is expedient to commence hostilities in your own dominions where your reputation will gain many adherents. When Mughals attack you I will distract them and subvert their plans."

Shivaji’s advice became the life-long mantra for the young Bundela leader whose parents had been killed by Mughals when he was a child. Driven by both ambition, patriotism and revenge against the fanatical activities of Aurangzeb, he started his movement in Bundelkhand with just 25 soldiers. But Mother Goddess smiled on him. Impressed by Chattrasal, a great local saint Pran Nath blessed him with success, which came to him in the form of discovery of the now famous Panna diamond mines.

The newly-found diamonds gave him the required financial strength to raise and subsist a full-fledged army and in the absence of Aurangzeb (few know that Aurangzeb went to Maharashtra to subdue Shivaji’s son Sambhaji in 1681 and never returned to the north, dying there in 1707) he carved out the kingdom of Panna. Chattrasal was the first warrior to take the baton of freedom from Shivaji to the north. The baton later ignited several anti-Mughal movements across India including the one led by the Sikhs. 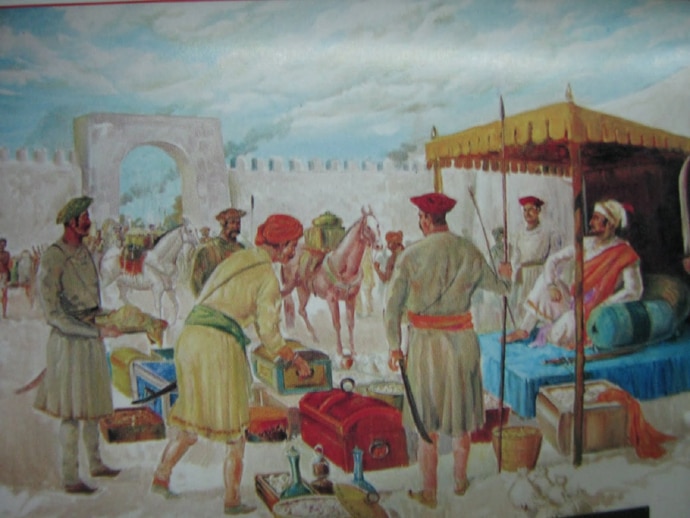 So it was indeed a nostalgic movement for all nationalist forces when a set of committed Shivaji admirers in Maharashtra led by historian Damodar Magdum brought Shivaji’s descendant, Chatrapati Yuvraj Sambhajiraje of Kolhapur and Maharaj Raghvendraji Singh of Panna, descendant of Chattrasal, on one platform in Pune on November 28 to commemorate the great meet between their ancestors 348 years ago. Both the descendants recalled many interesting incidents from the life story of the heroes and underlined the importance of their meeting from the nationalist perspective.

Bundelkhand historian Mahendrapratap Singh recalled how Marathas again helped Chattrasal in 1730 when Peshwa Bajirao attacked and defeated Ahmed Khan Bangash, a powerful Mughal general who had been harassing Chattrasal. The crowed burst into applause when he recalled the words of the couplet the hard-pressed Chattrasal wrote to Bajirao seeking his help against Bangash. Chattrasal’s words were, "Like the day Gajendra (elephant) came under pressure, this Bundela’s honour is at stake. O, Baji, Help save my honour."

Bajirao immediately came to his help and the two together hemmed Bangash in the fort of Jaitpur in Bundelkhand and forced him to sign a most humiliating treaty which stated that Bangash, the bravest of Mughal generals, would never step into Bundelkhand in future. In appreciation, Chattrasal gifted to Bajirao the beautiful Mastani who eventually captivated Bajirao and vitiated his family atmosphere but finally became part of a famous love story on which a film is now creating waves.

But the function was more important for another reason. Maharashtra’s rather controversial politics marked with casteist Maratha versus Brahmins rivalry in which Shivaji’s great character and message is sought to be exploited for political purposes by diverse parties has prevented the great conqueror-cum-nation builder from becoming a true national icon of modern India for which he is the fittest symbol if one goes by his achievements – ranging from his great victories on the battlefield and good governance marked by true people’s welfare and strong justice system to removal of middlemen between the rulers and the people and how to maintain balance between Hindus and Muslims on the foundation of equal justice.

So, against this background the function was perhaps the first step towards taking Shivaji’s message to north India and therefore closer to Delhi through the medium of the historic Shivaji-Chattrasal meet. As speakers spoke on the multiple facets of Shivaji the robust crowd repeatedly burst into applause. As chief guest at the function, I unravelled strong evidence to prove why Shivaji should be seen as the greatest Indian in 1,000 years – something that the great historian Sir Jadunath Sarkar wrote several years ago. Sarkar, who has also criticised Shivaji on some issues, wrote in his book, Shivaji and his Times, first published in 1919: "The mutual conflict and internal weaknesses of the three Muslim powers of the Deccan were no doubt contributory causes of his rise. But Shivaji’s success sprang from a higher source than the incompetence of his enemies. I regard him as the last great constructive genius and nation builder that the Hindu race has produced. His army was drilled and commanded his own people and not by a Frenchman. What he built lasted long. His institutions were looked upon with admiration and emulation even a century later in the palmy days of the Peshwas. Religion always remained with him an ever fresh fountain of right conduct and generosity. The sincerity of his faith is proved by his impartiality to holy men of all sects, Hindus as well as Muslims. His chivalry to women and strict enforcement of morality in his military camp was a wonder in that age. Shivaji proved that the tree of Hinduism is not really dead and that it can rise and again lift its head up to the skies after crushing load of centuries of political bondage, exclusion from administration and legal repression."

Significantly, Shivaji was described as a greatest hero in the travelogue of French traveller Barthelemy Carre who twice visited India during Shivaji’s period. In the travelogue published in 1699 in Paris Carre wrote: "Shivaji is the greatest man the East has ever seen. In his courage, rapidity of his conquests and his great qualities, Shivaji doesn’t ill-resemble the great King of Sweden Gustovus Adolphus. Nothing will be more appropriate for recital to our people than the history of Shivaji.

But the most captivating speech of the day was from historian Pramod Mande who proved with the help of a slide show as to how Shivaji’s name was firmly ingrained in the minds of diverse people across India for ages as a great Hindu king and how Shivaji’s history was available in half a dozen European languages.

Sambhajiraje honoured two painters, Vishwanath Khilari and Dinesh Kachi, and sculptor Amit Jagtap who unravelled their beautiful creations on the two heroes on the occasion. The funds for the programme came in the form of small donations from the personal pockets of the leaders of these organisations and not from rich businessmen. Clearly, the idea had the true spirit of the Great Shivaji even as the participants vowed to take Shiv Vichar to Delhi despite the cobwebs.

Post your comment
#Marathas, #Chattrapati Shivaji, #Shivaji
The views and opinions expressed in this article are those of the authors and do not necessarily reflect the official policy or position of DailyO.in or the India Today Group. The writers are solely responsible for any claims arising out of the contents of this article.