Why Shivpal Yadav is a lonely man today

A deal between UP CM Akhilesh Yadav and his father Mulayam has left him isolated.

Farming and politics have many things in common.

In both, you choose your farm carefully, till and nurture, wait for the opportune time to sow your seeds, water it from time to time and plan to harvest your crop when the time is ripe.

On Monday morning, when Uttar Pradesh chief minister Akhilesh Yadav was scheduled to do carry out the expansion of his Cabinet, the weather was cool and pleasant. It had rained abundantly last night. 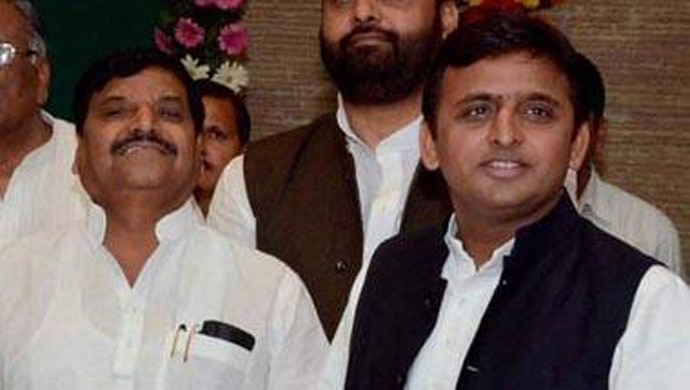 Shivpal Yadav decided to boycott the swearing in.

For the young chief minister it was time to sow his seeds keeping in mind the time of harvest - the elections - which are only few months away.

He had planned ihs moves carefully keeping in mind all the permutations and combinations of caste, region and religion.

He decided to sack his science and technology minister Manoj Pandey, re-induct sacked minister Balram Singh Yadav and inducted five ministers into his Cabinet. He was absolutely clear in his mind how to get the best harvest at the time of elections.

But at Raj Bhavan when the function of swearing-in started at 11am, the focus was not much on the new ministers who were being inducted. Everybody was talking about one of the seniormost and powerful ministers of the Akhilesh Yadav government who had decided to boycott today's function.

He was none other than UP agriculture minister Shivpal Yadav - Mulayam Singh Yadav's younger brother and uncle of chief minister Akhilesh Yadav.

Ironically, he chose to stay back in his hometown Etawah and hold a meeting with officers about Parti Bhoomi Vikas, that is, infertile land development.

Controversies are not new to Shivpal Yadav, but never before did this powerful minister feel so isolated, dejected and humiliated. He has always been willing to take into his stride a snub by his elder brother and party chief Mulayam Singh Yadav. But this time this scar was deeper because he was belittled in front of his nephew Akhilesh.

And both Mulayam Singh Yadav and Ram Gopal Yadav remained silent spectators to this humiliation. He was so deeply hurt that speculations started doing the rounds that he might even offer to put in his papers and resign from the ministry. However, he restrained himself and decided not to go public with his anger.

It has always been said that Akhilesh Yadav government has many power centres. So much so that it is said that in Uttar Pradesh there are four and a half chief ministers. One Mulayam Singh Yadav, second Ramgopal Yadav, third Shivpal Yadav, fourth Azam Khan and the remaining half - Akhilesh Yadav.

Akhilesh himself has admitted many times that he has learnt to work with his seniors in the party and his ministry. Despite occassional differences and conflicts, largely it was an arrangement that worked.

But the episode of the merger of Qaumi Ekta Dal with the Samajwadi Party has shaken the confidence of Shivpal Yadav and his followers.

On Monday, just after the swearing-in, he returned to Lucknow from Etawah. Once again he chose to skip another function at the chief minister's residence which was related to irrigation projects. Incidentally, he holds the irrigation portfolio in Akhilesh's Cabinet.

So why is Shivpal Yadav peeved this time?

Because he feels that Mulayam Singh was not fair to him and acted more like a father than the chief of the party and the guardian of Samajwadi Party. Sources close to Shivpal Yadav assert that the merger with Mukhtar Ansari's party was not an idea on which Shivpal Yadav and Balram Yadav started working on their own.

They claim that the whole plan was thoroughly discussed with Netaji and had his approval. They admit that Shivpal Yadav did not discuss it with Akhilesh assuming that Mulayam Singh will handle it himself.

But when Akhilesh, worried about his image, put his foot down about the merger in the parliamentary board meeting, Shivpal expected Mulayam to come to his rescue. But he was appalled to see that not only Ramgopal Yadav, but also Mulayam Singh sided with Akhilesh.

Cornered in the meeting, Shivpal had agreed to the break-up with QED which he was confidently saying is not going to happen. Mulayam wanted Balram Yadav to be reinducted and Akhilesh agreed to that. So a deal between the father and son was done and Shivpal was left isolated.

Shivpal Yadav has learnt his lesson, but people who know him say he will bounce back soon. Now all eyes are set on the next round between Chacha and Bhatija.

#Uttar Pradesh, #Akhilesh Yadav, #Shivpal Yadav
The views and opinions expressed in this article are those of the authors and do not necessarily reflect the official policy or position of DailyO.in or the India Today Group. The writers are solely responsible for any claims arising out of the contents of this article.