You can't call anyone a terrorist just because someone is allegedly a member of a banned organisation.

A  closer look at what Madhya Pradesh chief minister Shivraj Singh Chouhan says for public consumption and what he actually writes in his official communiqués can perhaps provide a peek into the various shades of truth, and the lack of it, in the now suspect police encounter of alleged Students Islamic Movement of India undertrials on the outskirts of Bhopal on October 31.

All eight SIMI undertrails were killed in this encounter, all at one spot on top of a rock outside Khejra Dev village, about 12 km from the Bhopal Central Jail, which these suspects had allegedly broken out of the previous night.

A day after the encounter, on Madhya Pradesh foundation day on November 1, Chouhan rose on the stage at the Lal Parade ground in Bhopal. Both hands raised, he thundered: "We did this encounter, was it right?"

The deafening applause emboldened him further and he shouted into the microphone, "It takes years for these terrorists to get convicted and for years they eat biryani, did we do the right thing or not?"

There was further applause as he had already played judge and declared all the eight undertrials as terrorists who deserved to be shot dead at almost point-blank range.

Now a look at what Chouhan writes in his official communiqués.

Under pressure from the media because of uncomfortable questions being asked and doubts being raised over the genuineness of the alleged encounter, he announced a judicial probe into the incident.

It took some days for his general administration department to issue a written order for the same, but when the order finally came there was no mention of the word terrorist in it. 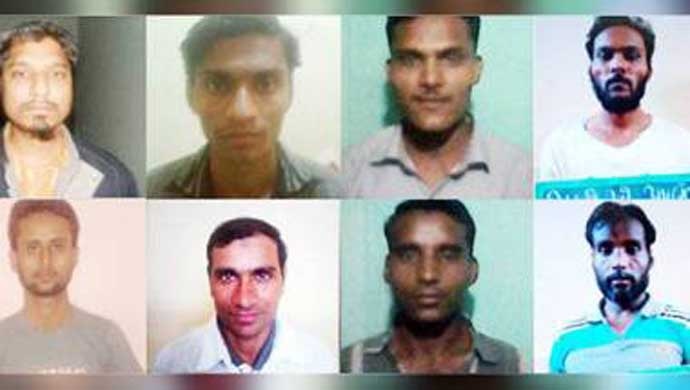 The CM did not call the SIMI undertrials "terrorists" when he was ordering a judicial probe into the encounter.

The eight SIMI suspects who had been labelled as terrorists at the Lal Parade ground had now become undertrials. Why this hypocrisy? Why did the CM not call them terrorists when he was ordering a judicial probe into the encounter?

The answer is simple. You can't call anyone a terrorist just because someone is allegedly a member of a banned organisation. The courts have to decide on that. And in the case of these SIMI men, the trial was still going on. They had not yet been convicted of any crime, let alone an act of terror.

And now a look at the charges that were being pursued against these eight men. All eight were charged with the Unlawful Activities Prevention Act (UAPA), 1967. The SIMI was banned on September 27, 2001, and brought within the purview of the UAPA.

From then on, anyone associated with SIMI, the eight men killed on October 31 included, was charged under the UAPA, 1967. Literature of the banned organisation was shown recovered from them and dingy dungeons became their permanent homes.

The Supreme Court in one of its judgments passed on February 3, 2011, rejected the doctrine of guilt by association. "Mere membership of a banned organisation will not make a person a criminal unless he resorts to violence or incites people to violence or creates public disorder by violence or incitement to violence," the apex court in its landmark judgement observed.

More than 25 SIMI men charged under the UAPA have already been evicted by MP courts on this ground.

Of the eight SIMI men who were killed, five were from Khandwa and three of them were also charged with an attempt-to-murder case. These three were the ones who had escaped from the Khandwa jail in 2013.

They were charged with attempting to kill a BJP man but surprisingly, in this particular case, the police had registered an attempt-to-murder case against unidentified men and had applied for closure of this case for lack of evidence.

The court had granted closure but one fine day, the police reopened the case and charged the three SIMI men with attempt-to-murder.

The sixth accused was undergoing trial for his role in the Ahmedabad blast and a bank robbery.

The story of the seventh accused, Khalid, is tragic to say the least. No one came to claim his body and the Bhopal municipal authorities buried him after the encounter. He is from Sholapur and his mother is reported to be working as a maid who washes dishes to make a living.

The eighth accused, Majid Nagori, was charged under the UAPA, and attempt-to-murder under section 307 of the IPC and the Arms Act. But he was not arrested by the police and had in fact surrendered in court.

Anyone raising questions on the alleged encounter can easily be labelled anti-national, as is being done by an army of trolls, but the fact remains that there is a section that is more than euphoric in calling people of a particular community as terrorists without any court conviction against them.

Sadly, Madhya Pradesh chief minister Shivraj Singh Chouhan is also one of them.

#SIMI Encounter, #Shivraj Singh Chouhan
The views and opinions expressed in this article are those of the authors and do not necessarily reflect the official policy or position of DailyO.in or the India Today Group. The writers are solely responsible for any claims arising out of the contents of this article.