How Indians solved the great shoe question of the British Raj

In their white muslin dresses and stiff new European shoes, the Hindu College boys stood proudly before the then governor-general Auckland.

The question greatly disturbed the military messes and the drawing rooms of British India for many months after the event. The Hindu College examinations had been held in the marble hall at Government House. Prizes were to be awarded to the best boys who recited English poems and acted scenes from Shakespeare. The 45 students of the college and the who's who of Calcutta's Indian society had been invited. They had arrived. But they had come wearing shoes!

European opinion was startled, and sharply divided. Sir Charles Metcalfe, in spite of his otherwise enlightened ideas, had never allowed Indians to come into the hall with their shoes on! But a number of Europeans felt that the natives were by now sufficiently well-informed and would be insulted. More civility and respect was in order. 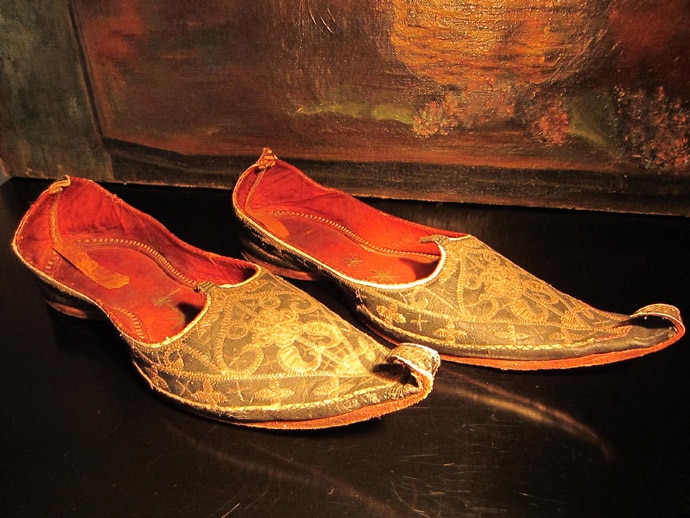 The governor-general, a mild, amiable gentleman was unlikely to overstep the bounds of well-signposted duties. But in this instance, he agreed and dismissed Metcalfe's, ie his predecessor's, order.

In their white muslin dresses, brilliantly gleaming turbans (which would have made the fortune of a milliner back in England) and stiff new European shoes, the boys stood proudly before the governor-general. Some found it difficult to walk in, but they persevered. Slowly, haltingly, they came forward to receive their prizes. It was a charming first in the rule book of the Anglo-Indian dress code - the British acceptance of dhoti-kurta clad Indians wearing shoes! Shoes that had been the norm since 326 BCE, when Alexander the Great first came to India, albeit of soft white leather with high heels.

Lord Auckland was governor-general of India during the 1836-1842 period. The prize giving ceremony was described by his sister Emily who was then visiting India.

Metcalfe's reluctance to having shod Indians in his presence dates back to the days of old Hindu royalty whose customs he would have studied in great detail. But he had missed one of the finer points. A point clarified by the Portuguese friar Domingos Paes who had accompanied Ambassador Christovao de Figueiredo to the court of Krishnarao king of Vijayanagar in 1520. A statue of Krishnarao, king of Vijayanagar, 1520.

The king was clothed in certain white cloths embroidered with many roses in gold, and with a PATECA of diamonds on his neck of very great value, and on his head he had a cap of brocade in fashion like a Galician helmet, covered with a piece of fine stuff all of fine silk, and he was barefooted; for no one ever enters where the king is unless he has bare feet...

[From A Forgotten Empire: Vijayanagar; A Contribution to the History of India, by R Sewell, published by S Sonnenschein & Company Ltd, 1900.]

According to Domingos Paes, "the majority of the people, or almost all, go about the country barefooted. The shoes have pointed ends, in the ancient manner, and there are other shoes that have nothing but soles, but on top are some straps which help to keep them on the feet. They are made like those which of old the Romans were wont to wear".

Since Indians sat on carpeted floors everyone regardless of rank, the king included, kept their shoes outside the hall.

Had Metcalfe and the rest of the Europeans, who thought themselves entitled to the respect given to the kings of old, removed their shoes, the Indians would gladly have complied.

Post your comment
#Fashion, #British Raj, #Indian culture, #Shoe stories
The views and opinions expressed in this article are those of the authors and do not necessarily reflect the official policy or position of DailyO.in or the India Today Group. The writers are solely responsible for any claims arising out of the contents of this article.