Smartening up Chandigarh for President Hollande is airbrushing reality

There is no way the visiting dignitary may stop his convoy to take a little walk and see the ugly side of the ‘City Beautiful’.

The City Beautiful, as Chandigarh is often called, has gone overboard in presenting a neat and clean look for the French president Francois Hollande who is visiting the city tomorrow as the chief guest at the nation's Republic Day in Delhi.

Every nook and cranny, which may catch the French president's sight, is being cleaned of weeds and kuchra that have not been removed from ages. All public buildings and parapet walls are being given a fresh coat of paint and flowering plants have been transplanted all along the route he is to take.

Interestingly, there are several areas where only half the length of wall has been painted because there is no way the visiting dignitary may stop his convoy to take a little walk and see the ugly side of the "City Beautiful".

In what raised the hackles of the local media, over zealous officials even erected a 12-foot-high and 400-metre-long chik or bamboo stick fencing to hide the dirty look of the Hallo Majra village, which falls on the route from the airport to the main city. The curtain around the village was pulled down after the local media published pictures and questioned the expense incurred on raising the temporary wall. The administration has now painted the exterior walls of the village and have asked the residents not to litter, at least till French president's visit is over. 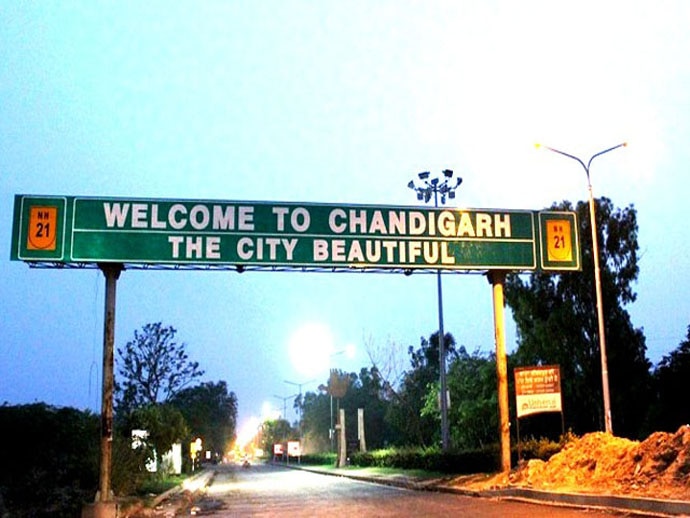 A huge posse of security personnel, including those from France's security agencies, would be guarding the French delegation. Extra care is being taken in view of the threat perception for the Hollande.

The French president would be received at the famous Nek Chand Rock Garden by Prime Minister Narendra Modi, who would escort him around the Rock Garden and then on to the Capitol complex, which was designed by the French architect, Le Corbusier. They shall also visit the Open Hand monument, the symbol of the city, especially designed for the city by Le Corbusier. The two leaders would then visit the Museum and Art Gallery, where, for the first time, ancient tools discovered recently from a nearby location, would be on display.

They shall then together address a meeting of CEOs from the two countries at the Taj Hotel where Hollande and his delegation would be staying. It's expected that the French president would declare special projects for Chandigarh.

These would include an MoU with The Agence Francaise D Development (AFD) to develop Chandigarh as a smart city. Prime Minister Modi is also likely to declare Chandigarh as the first smart city of the country.

Ironically, the French president's flight would be the first to land at the newly constructed Chandigarh International Airport, which was inaugurated by Modi over four months ago. So far, only domestic flights operate from the terminal.

India and France are also expected to sign an agreement for a high-speed railway link between Delhi and Chandigarh. Recently, a feasibility study was undertaken by French experts on the track.

Post your comment
#Francois Hollande, #Chandigarh, #Narendra Modi, #Smart city
The views and opinions expressed in this article are those of the authors and do not necessarily reflect the official policy or position of DailyO.in or the India Today Group. The writers are solely responsible for any claims arising out of the contents of this article.