Smriti Irani is that bahu who all bhabis love to hate

She is perhaps the only minister who has dared to take on the hostile media head-on.

No, Smriti Irani was not the best human resource development minister the country has had (though names of some of her predecessors like Arjun Singh also do not evoke much respect). Many think she was a walking-talking disaster and they are entitled to their opinion. But, there is absolutely no doubt that she has spunk. And, therein hangs a tale.

One cannot easily recall when the portfolio change of a Cabinet minister caused so much of elation and merriment - almost putting into shade all other changes in a mega Cabinet rejig. A leading daily carried the headline "Smriti Irani dropped", forgetting or ignoring the fact that she had been moved (or call it "shunted") to a ministry that oversees an industry that is the second largest employer in India after agriculture.

The liberal intellectual establishment and its friends in the media can barely hide their glee (not that they are trying particularly hard).

Interestingly, the nastiest jibes are coming from women - educated and accomplished by all accounts, some of them cultural czarinas in their own rights. Many of the quips and tweets are downright distasteful, which would have surely set the internet on fire if used against any of them.

One woman TV journalist was tickled to bits when a cerebral celebrity she was interviewing regaled her with an apocryphal anecdote of Irani snapping at an IIT director: "Why are you asking so many questions - are you a TV anchor?"

Front-page banner headline in mainstream newspapers calling her "Spinderella", which defies all standards of editorial decorum and should have left feminists fuming; have been lauded as "epic" by doyens of the profession.

Even before Irani became a minister, she has been a butt of jokes (such as those on the XXXL size of her dresses - the famous Fabindia episode in Goa) and people have not stopped short of making innuendos about her personal life. 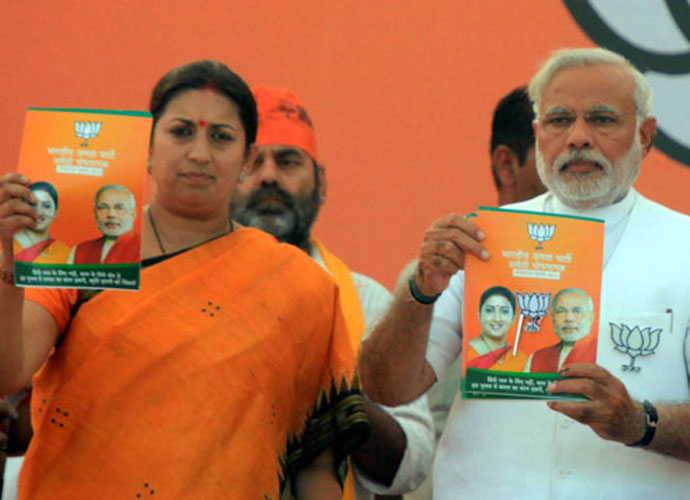 The problem with Irani is similar to that of her perceived mentor - the prime minister himself.

Professional women who champion the cause of gender equality in all walks of life have made not-so-subtle suggestions about her rise to power for considerations other than merit. Similar insinuations about one of their ilk would have been met with angry outrage about misogyny in public life. The uncouth remarks about her by the likes of Sanjay Nirupam do not even merit mention.

Also read: Why HRD ministry was snatched away from Smriti Irani

So what makes Irani the "bahu" (advisedly not calling her "aunty") that all sisters-in-law love to hate?

Surely, she is not the first woman politician with a streak of arrogance - nay, haughtiness. There have been many queen bees of the political circuit. Granted, she did not have commensurate academic qualifications to be the HRD minister (if it is indeed a pre-requisite to head the ministry) and we shall not get into the predictable argument about the credentials of some other politicians of stature either.

The problem with Irani is similar to that of her perceived mentor - the prime minister himself. Both are considered as lacking political pedigree and outsiders in Delhi. They are first-timers in the government - compared to say a Sushma Swaraj or Arun Jaitley. Therefore, in her, opponents see a surrogate of Narendra Modi - and by attacking Irani they are hitting back at the big man by proxy.

Also read: I love Smriti Irani. She hasn't been sidelined

Secondly, as the HRD minister, she was instrumental in striking at the root of the traditional bastions of academia and culture that have since independence remained the exclusive preserve of a privileged class nurtured in the Nehruvian ecosystem. That an alternate narrative could even exist was beyond the imagination of this pampered lot, who saw it almost as an assault on their fundamental right to life.

Thriving in the same symbiotic universe is a very influential community. This is the set that Modi recently referred to as a section of the media who never thought he could become the prime minister and is still not able to digest the fact.

Again by extension, the ire of this community falls on Irani. And, with good reason - for other than Modi himself - Irani is perhaps the only minister who has dared to take on the hostile media head-on. There are few as articulate as her in the BJP in one-on-one engagements with the media. Her sharp reactions on social media might appear petulant and immature drawing her more flak, but they never fail to rattle her detractors.

The cardinal sin Irani committed was not just contesting the scion of the Nehru-Gandhi dynasty in his family fiefdom, but bringing him precariously close to biting the dust. Even after the elections she has shown no signs of relenting and continues to nurture her adopted constituency with passion, much to the discomfort of the local political managers of the "family".

Again, besides Modi and BJP national president Amit Shah, she is the most vocal against the "dynasty", which resonates deeply in her stunning speeches in Parliament always hitting hard where it hurts the "family" most.

It is for this that she will remain a target as long as Modi himself remains a threat for the Gandhis. It would not be far-fetched to conjecture that the anti-Modi factions within the BJP and RSS have also been adding fuel to the fire to get even with the "boss".

But in their enthusiasm, most people have missed nuances and sub-texts that only some astute observers have picked up.

First, by no means is textile a lightweight ministry. In the next phase of the Modi sarkar, economic reforms will be much more important than a cultural revolution. For that, someone bold and with high energy will be an asset, especially to bring in much needed labour reforms in the industry.

That doesn't mean the BJP's core ideological agenda will be abandoned. For that, a Prakash Javadekar groomed in RSS akharas, unlike a lateral entrant like Irani, is an apposite choice.

Finally, opposition and intrigue has only augmented Modi's meteoric rise. The same may also work for Irani, particularly if she is able to prove her worth as a star campaigner for the BJP in the upcoming Uttar Pradesh elections. Here, she can be the BJP's trump card and an answer to Priyanka Gandhi's charisma that the Congress is so heavily banking upon.

Even on Wednesday (July 6), when she was assuming office in the textile ministry, the media arrived in hordes. She did not miss the opportunity to have a dig at them: "It may be the first time that many of you have come to this ministry."

If not anybody else, at least the Banarasi sari weavers in Modi's constituency should be happy with her move to the textiles ministry.

#Cabinet reshuffle, #Amit Shah, #Narendra Modi, #Smriti Irani
The views and opinions expressed in this article are those of the authors and do not necessarily reflect the official policy or position of DailyO.in or the India Today Group. The writers are solely responsible for any claims arising out of the contents of this article.