Political buzz notwithstanding, 20 years have already been wasted by not seeing this crucial legislation through in Lok Sabha.

Political grapevine suggests that the Narendra Modi government is mulling to clear the all-too-crucial Women's Reservation Bill in the Winter session of Parliament. The Bill, which was introduced by the UPA regime in 2008, and which was passed in Rajya Sabha in 2010, might just see the light of the day, after almost two decades of stonewalling.

The main points of the Bill are as follows:

a) The Constitution (One Hundred and Eighth Amendment) Bill, 2008 seeks to reserve one-third of all seats for women in the Lok Sabha and the state legislative assemblies. The allocation of reserved seats shall be determined by such authority as prescribed by Parliament.

b) One third of the total number of seats reserved for Scheduled Castes and Scheduled Tribes shall be reserved for women of those groups in the Lok Sabha and the legislative assemblies.

c) Reserved seats may be allotted by rotation to different constituencies in the state or union territory.

d) Reservation of seats for women shall cease to exist 15 years after the commencement of this Amendment Act.

As the buzz from the South Block of Raisina Hill creates a stir, mostly seen by many astute observers as Prime Minister Narendra Modi's attempt at spinning the narrative once again in his favour and coming across as a progressive, pro-women regime, Congress President Sonia Gandhi has thrown a spanner in the NDA's efforts at claiming the sole credit for the crucial legislation.

Smt. Sonia Gandhi writes to the Prime Minister for expeditious passage of Women Reservation Bill in LS as UPA passed in RS. Copy of letter- pic.twitter.com/Fz5mMwioH4

Sonia Gandhi has written a letter to PM Modi saying that the BJP government having a majority in Lok Sabha is a golden opportunity for his regime to finally clear the hurdles for the Women's Reservation Bill, which seeks to earmark 33 per cent of seats in Lok Sabha and the state legislatures for women candidates. The BJP-led NDA government has 336 seats in the 543-seat Lok Sabha (with BJP alone having 282 seats), and with Congress' backing (INC has 45 seats), a clear win is easily assured for the Women's Reservation Bill in the lower house.

"You may recall that the Rajya Sabha had passed the Women's Reservation Bill on March 9, 2010. Since then, however, it has languished in the Lok Sabha for one reason or another.

I am writing to request you to take advantage of your majority in the Lok Sabha to now get the Women's Reservation Bill passed in the Lower House as well. The Congress party has always and will continue to support this legislation, which will be a significant step forward in the empowerment of women. You may recall that it was, in fact, the Congress party and its late leader Shri Rajiv Gandhi who first mooted the provision for reservation for women in panchayats and nagarpalikas in the Constitution Amendment Bills which the Opposition parties thwarted in the Rajya Sbha in 1989 but later were passed by both Houses of Parlaiment in 1993 becoming the 73rd and 74th Amendments."

Sonia Gandhi's letter urging PM Modi to "take advantage" is not only a display of bipartisan political support which the significant Bill needs desperately, but also a canny move that reaffirms the credit where it's due. The history of the Constitution (108th Amendment) Bill is one that's fraught with political opposition of the most misogynist kind from political parties as diverse as the Samajwadi Party, the Rashtriya Janata Dal, the DMK, and even JD(U) and the Mayawati-led Bahujan Samaj Party (BSP).

On the other hand, led by the Indian National Congress, parties in support of the Bill included the BJP, the Left Front (including CPI(M) and CPI), the then late Jayallalaithaa-led AIADMK, as well as the Nationalist Congress Party led by Sharad Pawar. Curiously, Mamata Banerjee-led Trinamool Congress, which was then in power in West Bengal, didn't take an overt position on this.

In 2013, the last time there was talk of tabling the Women's Bill in Lok Sabha, the distrubution of favour and antipathy from political parties looked this:

Sonia Gandhi's letter is an important reminder of the history of the Women's Reservation Bill, and how it came about. While the 73rd and 74th Amendments passed in 1993, as Gandhi mentions in her letter, introduced 33 per cent quota for women in panchayats and municipalities, this was the fructification of the National Perspective Plan for Women (1988) which recommended so, along with a one-third quota for women even in political parties.

Similarly, the Constitution (108th Amendment) Bill that was tabled in Lok Sabha in 2008, was the result of the National Policy for Empowerment of Women (2001), which considered reservation for women in higher legislative bodies, including in Lok Sabha and the state legislative assemblies. In fact, the UPA's common minimum programme of 2004 and 2009 included the Women's Bill.

A handful of images depicting women politicians from different political parties coming together to celebrate the passing of the Women's Reservation Bill in Rajya Sabha in 2010 are a testimony to the fact that this was always above partisan politics and its main struggle was against institutionalised patriarchy. Sushma Swaraj, Brinda Karat, Najma Heptullah and others could be seen rejoicing outside Parliament, while Sonia Gandhi herself was hailed as the political heavyweight behind the passage of the Bill in Rajya Sabha, even though she wasn't a member of the Upper House, but the Lower House. 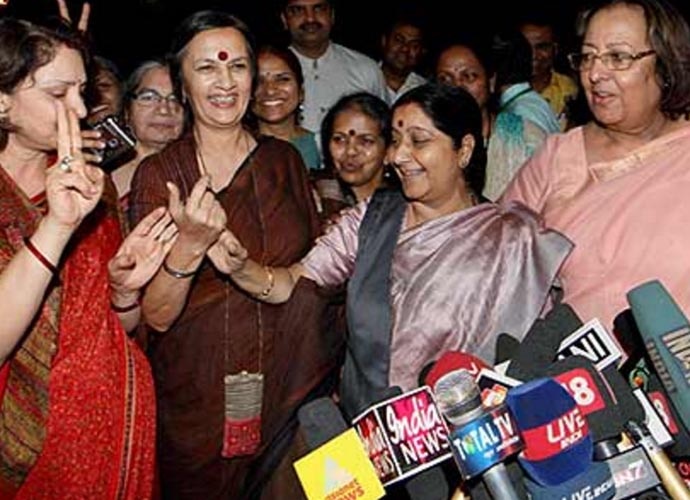 Tweets from politicians and journalists have widely welcomed the possibility of the elected politicians across the board showing enthusiasm about passing this landmark Bill in Lok Sabha, after which it will get assent from the President of India to become a law.

INC President pledges support 4 womens reservation bill.Govt must table it next session&ensure smooth passage 4 it 2b effective by 2019(1/2) pic.twitter.com/0Efw4PYd8i

Given that the narrative is spinning out of control from the Narendra Modi regime, thanks to the economic shocks resulting from the twin diktats of demonetisation and the "hasty" implementation of GST, as well as the political and ideological violence of the cultural nationalist kind tearing apart the country's secular, pluralist social fabric from within, it is desperately looking for a "progressive" legislation to latch on to. After the landmark Supreme Court judgement invalidating the instant Triple Talaq in Muslim marriages, a verdict behind which Narendra Modi had publicly thrown his political and institutional weight, creating the popular sentiment against it, it seems passing the Women's Reservation Bill in Lok Sabha could be the next step in capturing the narrative.

However, the Women's Reservation Bill, which has seen two decades of relentless campaigning from diverse feminist groups to ensure wider and stronger representation of women in higher legislatures, thereby having a direct stake in law-making and policy directions, demands that we rise above petty politics. This is a Bill that has seen some cross-party support in the past, but clearly not enough.

What is needed at this hour is political will and giving women what's long due. Hope PM Narendra Modi will ensure that the majority in Lok Sabha wouldn't be wasted this time too and pass the Bill that has seen political rivals coming together to forge a new, shared and progressive future together.

Also read: How the Indian economy can be revived