Do incitement to violence and threatening journalists have covert nod from the top?

That the Indian social media has come to be dominated by what used to be a lunatic fringe is now a truth universally acknowledged. Indian public discourse is not only being hijacked by social media hooligans, it is fast becoming of the trolls, by the trolls and for the trolls.

But what happens when a government initiative ends up backslapping a troll who is not just abusive on social media but actively calls for a section of Indian media to be "silenced" by none other than the Indian Army? In a sanity-defying move, which even if a gaffe cannot be brushed aside as an unwarranted mistake, PM Narendra Modi's pet project, Start-UP India has landed in a big soup. Start-Up India ended up retweeting a painfully tasteless and extremely inciting tweet from a trollish handle, which asked for the "presstitutes" to be taken care of by the unchalleangeable Indian Army. Conflating issues and robbing every nuance from a reasonable debate, this tweet, while using the hashtag #ProPakDovesSilent (another wonderful gift from the stable of Arnab Goswami), asked for violent suppression of free speech anf media gagging, in a way giving Goswami's own turgid ideas a more brutal twist. 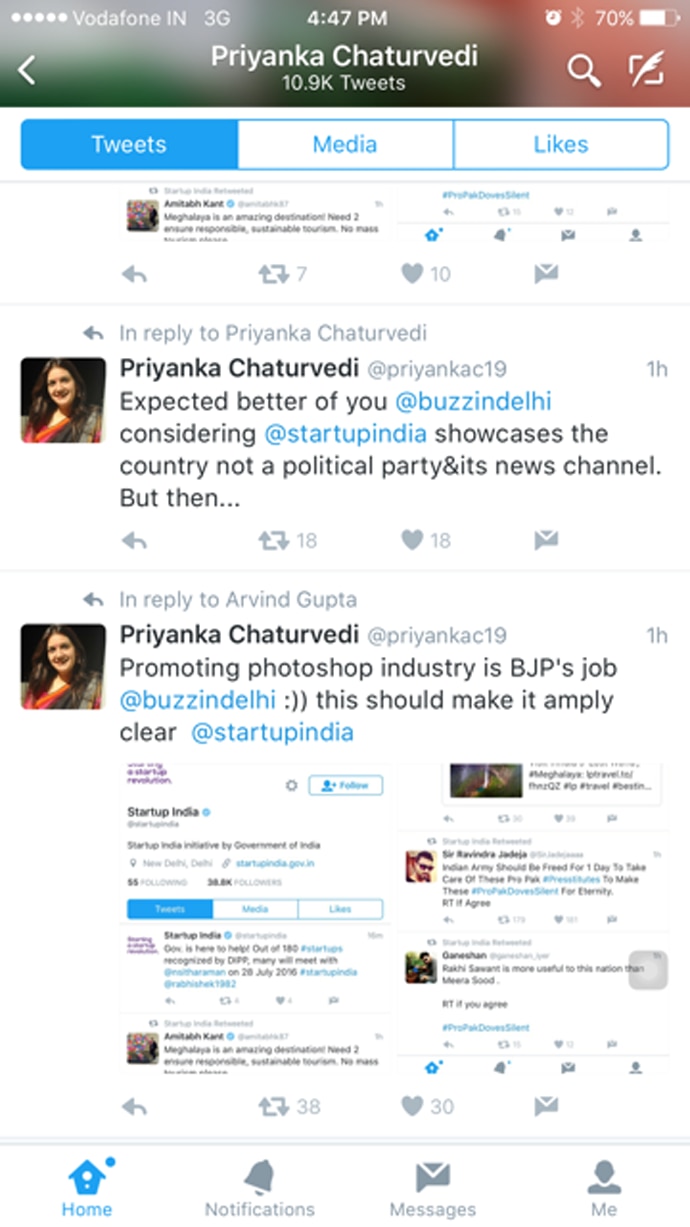 Exactly how and why would that tweet (which has since been deleted but sreenshots of which have flooded social media) be RT'ed by the official, verified, blue-ticked @StartUpIndia is beyond everyone's comprehension.

Naturally, it received a lot of flak on social media, but evidently it was too late, but the faux pas was too much to handle even for our thick-skinned liberal media, which battles such abuses on a daily basis.

So @startupindia RTs this drivel. Who is handling the account? pic.twitter.com/ySgpC4KJWu

Retweets by @startupindia - A Government of India Initiative pic.twitter.com/XbMiSW8ZO2

Getting India started on a hate driven agenda? Is @startupindia handle managed by the troll chief of BJP? Shameful. pic.twitter.com/GRqz0faQIZ

So this is what @narendramodi ji wants to start in India by @startupindia, A start up of abuses, violence & hate. https://t.co/Phd19E8nEo

Dear @nsitharaman has @startupindia given employment to RW trolls who confuse handles & tweet about violence against journalists? Appalling!

I think yesterday social media fiasco by StartupIndia handle,should be used as proof as to why novices should not be given to handle imp acs

When handler of @startupindia run by Modi govt forgot to change the handle and RT abuses! ???? pic.twitter.com/nq3NExeNAw

To Businesses Worldwide - This is how @startupindia officially welcomes you to India! Supporting killings! pic.twitter.com/rn4umz0qAQ

Harassing, abusing, threatening as endorsed by you guys is not a patriotic duty. It's usually a crime! https://t.co/R1gpLtpWre

That the troll - @SirJadejaaa - was venting his inimitable stance on the Kashmir question and fusing it with Kargil Vijay Diwas commemoration is obvious. What was also obvious is that the troll took upon himself to further Arnab Goswami's televised prime trime vitriol and amplify it many times by asking the Indian Army to turn into a media-hunting militia of sort. One listen to what utter rabidity that is Arnab Goswami's July 26 Newshour show - and what absolute peddling of mass derangement and a call to violence it could become - is enough to get the bigger picture.

But the larger hypocrisy is this: while the troll has been forced to delete his tweet, Goswami's over-four-minute raging rant has the pride of place in Times Now's Twitter timeline, with retweets going up by the hour. While Barkha Dutt has written a fine rebuttal to Goswami's tirade against whom he calls "pseudoliberals" and their "fake narrative" on Indian Army and Kashmir and Pakistan, is it enough when verified government initiatives are caught in the proverbial bed with these trolls?

We do not endorse anything outside the startup ecosystem. Apologies to our followers. (2/2)

Journalist Rohini Singh brought the fiasco by @StartupIndia to everyone's attention, and now we have something of an apology from the government platform.

We are here to create the world's best startup ecosystem. Unwarranted & irrelevant retweets have been deleted. (1/2)

But is it enough?

It is nothing new that PM Modi himslf is known to follow back Twitter handles that have attained notoreity on social media for their particular brand of rabid anti-liberal, anti-secular and highly uninformed takes on issues as crucial as foreign policy, India-Pakistan relations, Hindu-Muslim question, religion, Islamophobia, terrorism and myriad others.

Moreover, there have been cases of BJP legislators, whether at state or central levels, retweeting or tweeting themselves views that are downright uncontitutional and amount to hate speech.

Given that PM Modi's deafening silence on the rising graph on Dalit atrocities, beef violence and fatal rapes on women belonging to Dalit and Muslim communities is something that has stopped surprising us, should we see the latest incident as yet another "gaffe" or a covert nod for media gagging?

The jury is out, but not for long.