TRS must realise, Telangana belongs to the people - it is nobody’s jagir

It is time K Chandrashekar Rao understood that he a representative of the people in a democracy and is answerable to them, and not treat the state and its people as his private domain

Politicians treating voters with contempt is not new in politics.

In fact, in almost all parties, there are leaders who take voters for granted. Come elections and they make promises that are sometimes too good to be true. Pragmatism and legal constraints of implementing the promises made in the campaigns are ignored as there is no mechanism to audit a party’s election manifesto.

With the media not questioning the politicians on their promises or whether they have been kept, the political leaders are emboldened to brazenly lie and deceit the voters.

Nevertheless, politicians sometimes encounter questions from the people when they visit their constituencies to campaign during elections. The social media is rife with videos of people openly questioning the Telangana Rashtra Samithi (TRS) leaders about their promises that have not been kept. In some instances, the people’s wrath has resulted in heated arguments between the leaders and the aggrieved citizens. In their frustration of not being able to find an answer, there have been many instances where TRS leaders have told voters “don’t vote for us if you don’t want to.” 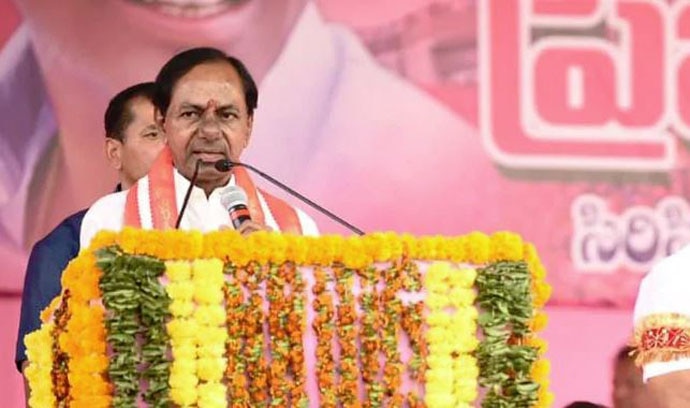 No one's private estate, it is a democracy, sir (Photo: Twitter/ trspartyonline)

Most recently, the TRS chief — K Chandrashekar Rao (KCR, as he is popularly known) — lost his temper at a rally in Kagaznagar. KCR was justifying his government not completing a full-term, and why the per-capita debt increased in Telangana under his government. This is when a young man in the crowd piped up about his promise in 2014 that he would bring in 12 per cent reservations for Muslims in jobs and education. A visibly incensed KCR asked the young man to sit down and accused him of pulling a stunt (Tamasha) in disparaging tones. Finally, KCR burst out saying, "Baitho. Tera baap ko bolunga na. Baitho (Sit, I will answer even your father. Sit)."

While he did not use foul language, KCR referred to the youth very disrespectfully in Telugu. However, he told the crowd not at admonish the young man, lest the crowd attacked or lynched the man. Small mercies — given the political climate our country descended to, over the past few years.

KCR then went on with his speech and claimed that China has progressed while India has not because of people like the youth who questioned him. Gesturing at the youth, he said in Telugu, “Alcoholics like him, people living in poverty like him (thaagubothulu, daridrulu), make merry during elections by getting drunk and creating a nuisance are the cause of hindered development.”

Ironically, the TRS itself is notorious for encouraging alcohol at its meetings and rallies. As lakhs of people gathered for the Pragathi Nivedana rally in September, there were numerous reports of people being enticed by alcohol. Some national news channels even showed clips of men and women drinking on the way to the rally.

In a brazen misuse of authority, the Hyderabad Metropolitan Development Authority (HMDA) did not collect toll tax from the vehicles plying on the Outer Ring Road on the day of the Pragathi Nivedana rally, leading us to question if the government would have waived off the tax if other political parties or organizations organize similar rallies? What is the criterion for availing such a waiver?

While the hangover of having one too many drinks will subside in a day, those inebriated by power tend to become delusional. Throughout the four year term of the TRS government, there were numerous instances of their leaders attacking people and even officers, sometimes in unparliamentary language — many of these videos are still available on YouTube. Some were arrested, but then later released — as is the case in Indian politics.

The TRS must realize that in a democracy people will question leaders. KCR often lashes out at his political opponents and reminds them that Telangana is not their jagir (private estate). It is time that he reminded himself of the same words —Telangana belongs to the people. It is nobody’s jagir.

#Telangana assembly elections, #Telangana Rashtra Samithi, #K chandrashekar rao, #Telangana elections
The views and opinions expressed in this article are those of the authors and do not necessarily reflect the official policy or position of DailyO.in or the India Today Group. The writers are solely responsible for any claims arising out of the contents of this article.