Ashis Ray, who has Congress links, is cherry-picking data to establish that Netaji died in an air crash in Taipei, 1945.

Ashis Ray, part of the pro-Congress faction in the Bose family, is back to his old tricks of cherry-picking data and dishing it out to unsuspecting media persons, and through them, to the general public, to conform with his stand that his granduncle Netaji Subhas Chandra Bose died in an air crash in Taipei in 1945.

His latest is a "world exclusive" - a "60-year-old classified Japanese government investigation report" - which he has put on his site as well as emailed to media persons, many of whom have carried Ray's press release as if it were gospel truth, coming as it does from a Netaji kin and a former journalist based in London. The problem is, what Ray claims "is being made public for the first time" has actually been available since January this year, thanks to the man Ray detests - Prime Minister Narendra Modi.

This defeats Ray's further claim that "the Indian embassy in Tokyo and the ministry of external affairs in Delhi had misplaced the copy given to it in 1956".

The only reports that the government of India is in the habit of misplacing are those which might cast a doubt on the veracity of the claim that Subhas Bose died in an air crash.

More than one file declassified by the current government contain copies of the Japanese report that Ray is flaunting as something new.

For instance, the following sketches of the bomber that reportedly crashed with Netaji on it and the airstrip on which it allegedly happened come from the "world exclusive" photocopy circulated by Ray. 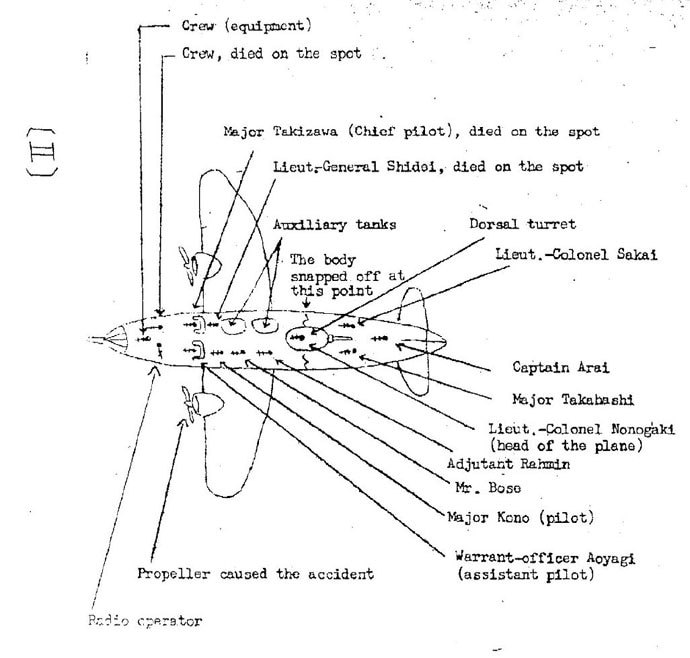 And here is one of the sketches from a file released by the Modi government: In fact, this writer during his active journalism days, had accessed the report when it was still classified. That's why references and images from it appear in his 2012 book India's Biggest Cover-up. Here's an excerpt from page 64. You can see the airstrip sketch also seen in Ray's photocopy: 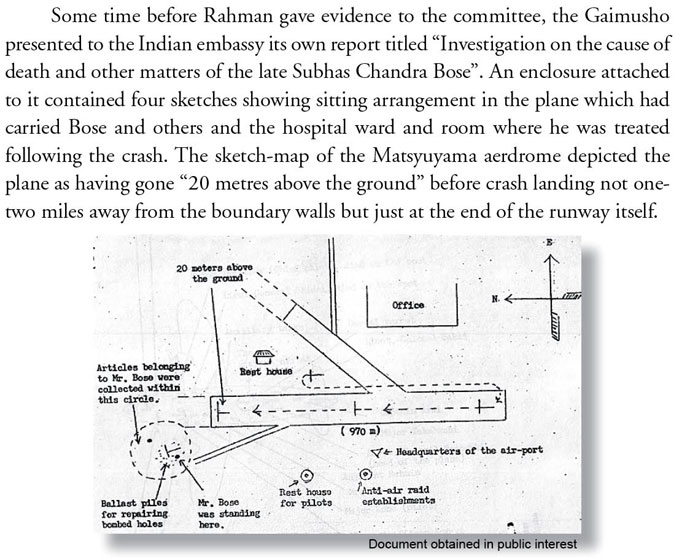 All that the Japanese government report does is to succinctly outline the claims of certain officers that there was an air crash and Bose died. This is not how a matter of such importance is inquired into. The statements made by the Japanese have been gone into in great details in the past. The very fact that the Japanese version was re-examined years after the reported death of Bose shows it was disbelieved by the Allies.

I cannot think of a better way to present the crux of the outcome than to quote what the Central government counsel was constrained to admit in 1998 before Calcutta High Court chief justice Prabha Shankar Mishra - "The government of India... is maintaining even now that a further probe is required and the information that Netaji died in the plane crash on August 18, 1945 is full of loopholes, contradictions and therefore inconclusive."

Consequently, the court ordered the formation of a commission that came to be headed by Justice MK Mukherjee. Even as he started with the hypothesis that Bose had died in an air crash, Justice Mukherjee felt that "treating the oral evidence of the eyewitness about Netaji's death and cremation as axiomatically true would be non sequitur and over-simplification of and a superficial approach to this complex issue".

After he had looked into everything on record, including the Japanese government's report, Mukherjee reached a conclusion that "men may lie but circumstances do not".

"In cooking up the story of Netaji's death in the plane crash and giving it a modicum of truth they (the Japanese military authorities and Habibur Rahman) had no other alternative than restoring to suppression of facts and in doing so they not only invited material contradictions in their evidence as pointed out... but also left latent loopholes which have now been discovered."

The judge's finding that Bose never died in any crash and that he was Soviet Russia-bound at the time of his reported death was eventually dismissed by the Congress-led government without assigning any reason in the so-called action taken report tabled in Parliament in 2006. A blot on democratic norms, this was much to the delight of the pro-Congress faction in the Bose family.

Files now declassified reveal that it was an undersecretary to the government of India who sat in judgment over a report prepared by a former Supreme Court judge.

Also read - The mystery continues: Did Netaji end up in Soviet Russia?

#Congress, #Ashis Ray, #Subhas Bose
The views and opinions expressed in this article are those of the authors and do not necessarily reflect the official policy or position of DailyO.in or the India Today Group. The writers are solely responsible for any claims arising out of the contents of this article.