When even the Supreme Court's voice drowns behind prison walls

Infringements of the rights of detenus are the norm rather than the exception in the country's jails.

VVIP convicts and prisoners like Jayalalithaa, Salman Khan and Sanjay Dutt often receive special treatment leading to an outcry that prisoners are being treated with kid gloves by the criminal justice system. But, for every "special" jail inmate, there are thousands of prisoners in the country's jails whose basic rights are constantly trampled upon.

Over forty years ago, a three-judge bench of the Supreme Court made it absolutely clear that "convicts are not, by mere reason of the conviction, denuded of all the fundamental rights which they otherwise possess". In 1981, the court repeated, "The prisoner or detenu has all the fundamental rights and other legal rights available to a free person, save those which are incapable of enjoyment by reason of incarceration."

However, despite the rulings of various constitutional courts down the years, jail administrations and police throughout the country continue to follow procedures that operate on the basis that prisoners deserve no human rights - perhaps assuming that detenus are "less human" or "non human" beings. Infringements of everyday rights are the norm rather than the exception. Here, we depict some of the most common breaches of rights in detention: Torture in police custody as well as in jail custody is practiced on a daily basis throughout the country, even leading to custodial death. The Supreme Court in 1996 declared, "The increasing incidence of torture and death in custody has assumed such alarming proportions that it is affecting the creditibility of the Rule of Law and administration of criminal justice system". It instituted guidelines to prevent torture, but the practice continues. It was way back in 1980 that the Supreme Court laid down, "Handcuffing is prima facie inhuman and, therefore, unreasonable, is over harsh and at the first flush, arbitrary. Absent fair procedure and objective monitoring, to inflict 'irons' is to resort to zoological strategies repugnant to Article 21."

In 1996, the apex court again reiterated, "We declare, direct and lay down as a rule that handcuffs or other fetters shall not be forced on a prisoner - convicted or undertrial - while lodged in a jail anywhere in the country or while being transported or in transit from one jail to another or from jail to court and back." However, despite the law being stated so unequivocally, the sight of chained, roped and handcuffed prisoners is common in almost all the states. 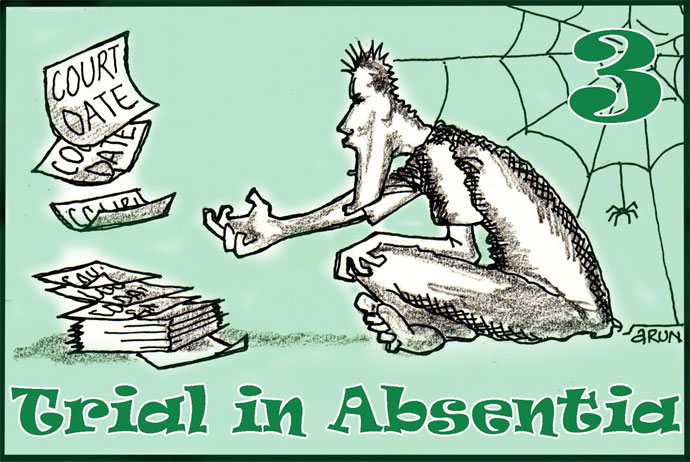 Section 273 of the Code of Criminal Procedure, 1973 provides that "all evidence taken in the course of the trial or other proceedings shall be taken in the presence of the accused". However in many areas, the police plead a lack of personnel and do not provide escort guards to take the undertrial prisoner to court.

To avoid repeated adjournments, the advocate representing the prisoner is compelled to apply for "exemption" from appearance of the accused and the trial takes place without the accused knowing anything of what has transpired in court. This most basic legal right to be present during one's own trial is thus denied. One of the few interactions that a prisoner has with the outside world is the "mulaakat", when relatives and friends are allowed to visit the inmate in jail. The Supreme Court has held, "Considered from the point of view also of the right to personal liberty enshrined in Article 21, the right to have interviews with members of the family and friends is clearly part of personal liberty guaranteed under that Article."

It thus ordered that jail administrations be liberal in allowing visits of family and friends. This is, however, rarely implemented. Poor and indigent families from remote and backward areas are particularly affected. They are often denied meetings on some technical ground even after travelling long distances and undergoing great expenses. Ban on Reading and Writing

Jail administrations arbitrarily decide what the inmates should and should not read. Some prison bosses, owing to a fear of petitions and complaints against them, even impose a complete ban on writing materials. Such bans go against the writ of the Bombay High Court, which ruled that a detenu could receive any periodical or book which can be lawfully obtained and read by the general public, and of a full bench of the Kerala High Court that held that a prisoner was entitled to receive "Maoist literature".

As regards writing material, a five-judge bench of the Supreme Court, way back in 1965, held that it was lawful for a prisoner to write and even publish a book from jail. However, such judgements remain on paper while the unwritten bans are rigidly applied in all jails. For many centuries the Manusmriti kept the Shudras away from the Vedas by prescribing that "the ears of him who hears the Veda are to be filled with (molten) lead and lac". Today's prison superintendents forcibly keep many books away from the inmates under the pain of prison punishments.

#IPC, #Rule Of Law, #Undertrial, #Supreme Court
The views and opinions expressed in this article are those of the authors and do not necessarily reflect the official policy or position of DailyO.in or the India Today Group. The writers are solely responsible for any claims arising out of the contents of this article.