Surgical Strikes 2.0: How air strikes have titled the balance of 2019 polls in Modi's favour

By sheer coincidence of circumstances, the IAF strike could not have come at a more opportune moment for the beleaguered government.

The preemptive strike by the Air Force against terror camps in Pakistan has not only drawn a new red line in the country’s policy towards terror emanating from across the border. It has, according to indications available, tilted the political scales decisively in favour of Prime Minister Modi in the rumy up to the 2019 General Elections.

By sheer coincidence of circumstances, the IAF strike could not have come at a more opportune moment for the beleaguered government. In one fell stroke, it has changed not only the political narrative but also provided the ruling combine with a much-needed cutting edge to its campaign. It has, at least for the moment,  relegated all talk of joblessness, rural distress to the background. Its all about teaching the enemy a lesson.

The Oppositions brain trust at its meeting on Wednesday has a lot to worry about. There has been a sudden shift in the momentum towards the Government, especially Prime Minister Modi, with a distinct possibility of the mood developing into something bigger in the days ahead. By sheer coincidence of circumstances, the IAF strike could not have come at a more opportune moment for the beleaguered government. (Photo: PTI)

The Opposition has rightly come out in support of the military action and of the government, for it cannot and should not be seen politicking or trying to weaken the government on the issue as grave as one concerning the fight against terror and Pakistan.

However privately the Opposition leaders are worried about the political fallout of the terror attack on the CRPF convoy in Pulwama and subsequent developments. They admit that given the way that events have unfolded over the last couple of days the advantage is now clearly with the BJP. “Pulwama and Balakote may end up having a bigger impact on the outcome of the elections than anything else,“ says a senior Opposition leader.

Strategists helping out the Opposition parties are particularly alarmed with reports coming in from UP. By all accounts, the ruling combine was down on its knees prior to the attack on Pulwama because of the solid social combination that then SP BSP RLD alliance heads put together. Opposition leaders are worried about the political fallout of the terror attack on the CRPF convoy. (Photo: PTI)

However given the change in the public mood following Pulwama and especially after the IAF’s punitive strike on Tuesday, support for the government appears to be cutting cross-caste faultlines. “For the moment there is little that we can do other than hope that this will fade away with the passages of time, “ says a senior opposition leader.

Time is not something that the Opposition has in abundance at the moment. The EC is all set to announce the schedule for the next general elections within a week from now, and once the formal announcement is made the gloves will be off and the BJP and its propaganda machinery are expected to aggressively claim credit for teaching Pakistan a lesson. Modi and Amit Shah will portray the air strike as an example of a "mazboot sarkar” helmed by strong and decisive leadership as opposed to the “khichadi” that opposition has to offer. 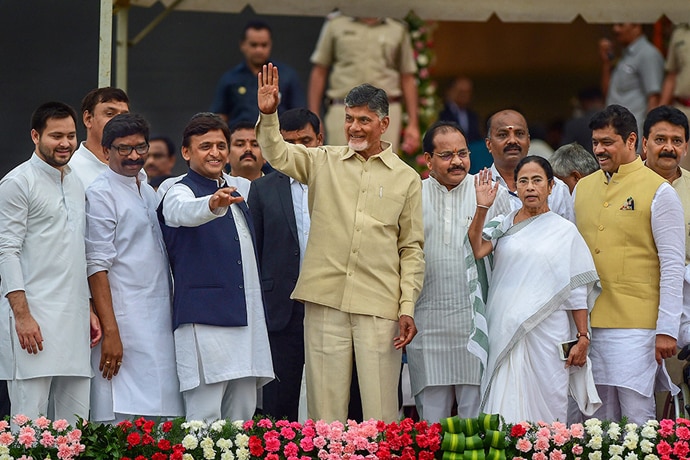 Time is not something that the Opposition has in abundance at the moment. (Photo: PTI)

As things stand the Opposition does not have too much time to turn things around. It's now where near the unified force it had promised it would be and is still far short of its stated aim of ensuring a one to one fight against the BJP in a majority of the Lok Sabha seats. Mamata Banerjee and the Congress are at loggerheads in Bengal not only have SP and BSP shut the door on the Congress in UP, but they have also now decided to put up candidates in MP and Rajasthan, thereby making it all the more difficult for the Congress party.

Modi has not only struck deep into the heart of Pakistan and in doing has also thrown the Opposition off balance ahead of 2019 general elections.

Post your comment
#Congress, #Rahul Gandhi, #Mamata Banerjee, #IAF
The views and opinions expressed in this article are those of the authors and do not necessarily reflect the official policy or position of DailyO.in or the India Today Group. The writers are solely responsible for any claims arising out of the contents of this article.