Villagers asked to evacuate are enraged at the media hype; their homes are almost empty and crop is being wasted.

“Hun jang na lava deo!” (Now, don’t trigger a war!) - shouts an enraged villager, Kulwant Singh, at us. He is the caretaker of the local gurdwara of village Daoke on the India-Pakistan border.

Some join the chorus as they see our cameras and notebooks. Villagers are keenly watching the high decibel rhetoric belted out by TV channels, where 80 per cent of news is on the India-Pakistan trajectory, in the heightened tension of the last two weeks.

Villagers in the border belt with Pakistan were ordered to evacuate after Indian armed forces carried out "surgical strikes" on September 29, in retaliation for the September 18 attack in Uri, Jammu & Kashmir, attributed to Pakistan’s terrorist network.

Daoke is situated bang on the border where the international boundary’s barbed wire fence is a mere crow’s flight away. So close to the border that one milkman Bitu's mobile number shows the country code of +92 (Pakistan).

Even as hectic activity was noticed, as ripe paddy crop is being harvested speedily in villages, due to panic, their anger is not amiss.

Many villagers owning fields beyond the barbed wire fencing on the Indian side of the border are barred from tending to their fields by the Border Security Force. They rue the accrued losses and moan that their loans will remain unpaid, as no one can tend to their standing, ripened crops. 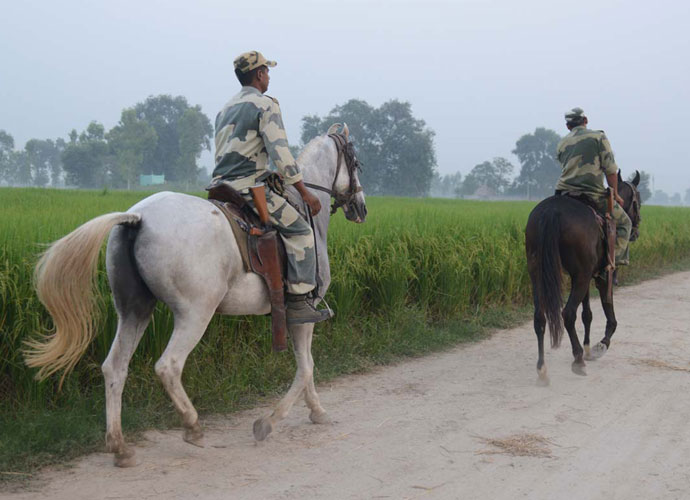 Patrolling by horse-mounted Army personnel, besides police and armoured vehicles of the BSF, is going on in the border villages.

With many of the village’s women and children having left for safer places, much of the responsibility and burden of household chores, livestock and fields has fallen upon the frail shoulders of the elderly, while fields within the barbed area with newly ripened paddy are being managed by sons whose wives and children are staying with relatives in the cities.

Daoke’s Satwant Kaur cries: “In this old age, when I needed rest and comfort, I have been pushed to tend to cooking, cleaning and all house chores alone, as both my daughter-in-laws and their children were sent to their maternal homes. An old woman is expected to deal with everything!”

The reluctance of the villagers to evacuate has reasons. Whenever tensions build up between India and Pakistan, they fall in the first line of evacuation. At places, a mere road separates the defence drain and the fields of villages.

“Besides the cumbersome drill of packing and transporting belongings and requesting city counterparts to help, crops too suffer,” says one Gurmeet. The biggest reason, however, as Gurmeet puts it: “This time it is unlike earlier evacuations, which were serious. This one is merely precautionary and anticipatory.”

They are also loath to evacuate because they know they will get the whiff of any serious preparations for an attack through tip-offs from across the border, where they have contacts.

The contacts are through the ignominious drug trade. Villages Hawellian, Narli, Bharopal and Daoke are well known for their drug links. Incidentally, the controversial film Udta Punjab on the drug menace in Punjab, is peppered with mentions of these villages in conversations.

After evacuation orders by local deputy commissioners (DC), the villagers of Bharopal, similarly poised on the India-Pakistan border, are also restless. The situation is alike in Kakkar, Rajatal, Neshta, Pandhori, Manj, Kawe, Bachiwind, and Ranian along the border, where very few have left homes.

Punjab’s chief minister Parkash Singh Badal had deputed DCs to supervise evacuation, on the possibility of retaliation by Pakistan, and declared: “These are precautionary steps to prevent civilian loss in case of any misadventure from across the border.”

Badal claimed to have released Rs 1 crore for each border district. When asked about the compensation, the villagers of Bharopal exclaimed: “Not a drop of compensation arrived on our doorstep!” Many villagers owning fields on the Indian side of the border have been barred from tending to them by the Border Security Force.

Amritsar’s DC said 15 camps and a score of buses were spared to ferry people. The villagers of Daoke are ignorant of any such travel arrangements.

Following recent incidents, 11 government school buildings were notified for residents of the border belt. Arrangement at Khasa school for about 500 people has no takers. In Chhabal village of Tarn Taran, about 30 rooms are in readiness to accommodate 250 people. Very few have arrived in relief camps falling in the adjoining district of Tarn Taran along the border.

They preferred to take refuge in gurdwaras nearby where food is assured via langars. All private and government educational institutions within 10km radius of the international border remain shut. Those living near the border have been asked to switch off lights at night.

Jasbir Singh (82), a village elder of Bharopal, had even witnessed the Partition of 1947. Village Neshtha’s Balwant Singh articulates: “We will not move out till the time shots are fired, the artillery is moved in and the defence canal is filled with water. How much baggage can we take? Our livestock, grain and household items were looted when we left the last time following the Parliament attack."

This journalist saw patrolling by horse-mounted Army personnel, besides police and armoured vehicles of the BSF in border villages. In the stand-off in 2001-02, when villages were evacuated, India and Pakistan's soldiers stood eye-to-eye.

Fields along the barbed wire fencing and beyond were heavily mined and many casualties of defence personnel and villagers were reported due to accidents during movement of artillery, besides incidents of fire in mined fields.

BSF deputy commandant HS Sidhu confirms: “The evacuation exercise is a precautionary measure. BSF has enhanced vigil and augmented forces along the India-Pakistan border. Media hype and the acrimony between the two nations cannot be ignored."

Other precautionary measures include sounding hospitals and keeping medicine supply in readiness. Unconfirmed reports are also trickling in of fortifying of ICP (integrated checkpost, Attari-Wagah) and cleaning of bunkers on the border.

Even as anxiety prevails in villages, India-Pakistan trade seemed untouched by any tension. Balwinder Singh, in-charge of the port at Attari-Wagah, revealed that as many as 190 trucks carrying cement, gypsum, rock salt, dry fruit and dry dates arrived from Pakistan and 55 trucks with tomatoes from Maharashtra, cotton and buffalo meat drove to Pakistan.

Passenger count on the international route seemed affected. Four times-weekly Punj-Aab Express, the Amritsar-Lahore bus, didn’t ply as no passenger was booked on it. Passenger flow via the bi-weekly Samjhauta Express train between the two countries remained at about 150 persons on both sides on Thursday. Besides this, only five passengers each crossed from either side via Sada-E-Sarhad Delhi-Lahore bus on Saturday.

Also read: What to do when India can't afford a war, Pakistan doesn't want peace

Post your comment
#Pakistan, #Uri attack, #Surgical strikes
The views and opinions expressed in this article are those of the authors and do not necessarily reflect the official policy or position of DailyO.in or the India Today Group. The writers are solely responsible for any claims arising out of the contents of this article.