Whose womb is it anyway: Everyone but the mother's in India

The Surrogacy (Regulation) Bill 2016 is a lost opportunity and an exercise in moral crusading.

The government of India today decided in its infinite wisdom not to avoid addressing the issue of commercial surrogacy in India.

While allowing a stay on altruistic surrogacy under specific conditions - for medically infertile Indian married couples in need who had no prior children - it decided to ban commercial surrogacy completely.

There are a number of reasons why the Surrogacy Bill 2016 banning commercial surrogacy and regulating altruistic surrogacy in India is a lost opportunity and an exercise in moral crusading.

Firstly, it throws open the black market and shuts its eyes to the fact that the demand for surrogacy exists. Even as India shut its doors to foreign couples seeking children two years ago, the demand has now redirected itself to emerging hub such as Mexico.

These centres perform surrogacies in highly unregulated environments which means there are no guarantees for the health conditions of the surrogate mother, the baby to be born, or payments made, and responsibilities of the commissioning parent. Exploitation is rife, of both surrogate and aspirant parent.

India by comparison, in the last twenty years or so, had developed some sort of a market standard for surrogacy, which is why it became a world hub. A surrogate enlisting knew what to expect or demand in terms of having her costs covered, her medical Bills looked after, her nutrition looked after, and word of mouth had established some trusted doctors - like Firuza Parekh of Jaslok hospital and Dr Nayana in Anand amongst others - in the field alongside legal services.

There have also been numerous cases of exploitation at lesser known clinics, but that is something tight and focussed regulation could have weeded out. With tightly drawn laws India could have protected the rights of surrogates.

Economist Abhay Pethe explained black markets as the only possible outcomes of any ban in any economy. The only purpose it serves is to push commodities underground.

Surrogacy will continue - India's thriving black market economies will create ways to dub healthy couples as infertile, and surrogates as relatives - it will just not provide the government with any data, or any ability to regulate it. Calling it 'altruistic surrogacy' will not take away the problems, but will render them invisible.

Second, the Surrogacy Regulation Bill, 2016, throwing it all to "altruism" does nothing to protect surrogates. Surrogate mothers have hitherto been at the mercy of doctors, middlemen, recruiting agents and commissioning parents. Many took to it as a way to make easy money.

But at least in the hands of a good doctor, they and their spouses or families were educated about how surrogacy is scientifically possible without the child being genetically theirs. It introduced them to medical advances. Doctors in good hospitals and seeking wealthy clientele needed to ensure optimal health of surrogates - forcing them to provide nutrition, vitamins, supplements and hygienic living conditions apart from emergency and timely medical care.

The government could have pushed to make these not merely dependent on the happenstance of finding a good, ethical doctor, but could have made these the substance of a basic, minimum law. Which means doctors, hospitals and agents could have been forced to enter into legal frameworks that made surrogacy without providing these to surrogates punishable.

Also read: It's not you, it's about being a mother

Instead, all the Bill does is to say women cannot be surrogates more than once, and should be related to the commissioning parent  -  assuming naively that being related somehow guarantees right treatment. This is akin to the Child Labour Bill in which families may employ children.

It throws open the possibility of rampant and unchecked exploitation in which uneducated surrogates may not only be coerced into situations they do not fully understand by wealthy patrons who ask them to lie about being related, on the promise of being compensated, but are also not obliged to be educated about what they are getting themselves in for, or whether they will be looked after through it.

Where commercial surrogacy set some sort of a free market minimum standard - the cash component at least assured her of some outcome however quantifiable - altruism has no base line expectation that the surrogate can set for herself beyond the kindness of relatives.

What are the legally-defined terms today, emerging from this Bill, by which a surrogate subject to altruistic surrogacy who feels short-changed can approach the court? None.

The government is relying on family ties to sort what it should. And is as such abdicating responsibility.

Thirdly, the Surrogacy Bill is moral judgement on the childless. In a country like India, where motherhood is as much social pressure as it is joy, the Bill fails to understand the motivations of commissioning parents. To dismiss celebrities as indulging in "shauk" is insensitive and unfeeling.

Also read: My daughter went to same school as Aryan. SRK-Gauri as committed a couple as us

Kiran Rao, the first and most famous case of surrogacy in Bollywood, suffered miscarriages and surrogacy provided a way out. Shah Rukh and Gauri Khan had AbRam Khan through surrogacy because it was their choice.

Gauri Khan's medical issues are not publicly known, but as a woman of 45 who wanted a child - and by all accounts Shah Rukh Khan and Gauri are not irresponsible parents - who is the country to judge what joy that child brought to their marriage?

The calling out of celebrities, many of them taxpaying, responsible and visible adults who seek parenthood whether because they are single, or gay, or otherwise merely want children, should not be subject to political and social shaming for their choices.

Judgemental towards the childless

Amongst ordinary women and couples, childlessness in India is a social stigma many battle at several levels. Many marriages go through strains due to the pressure of childlessness, due to age, or medical components. Women in turn are put through untold psychological trauma for not being able to conceive.

Many take on multiple rounds of painful and expensive IVF. Many choose not to adopt as either the pressure for or desire for biological children is high.

In a country where women are subject to not just taunts but multiple consecutive births, it is rich that a government sits in judgement over women who choose to opt out.

India's first headline shattering surrogate birth - was of Akanksha - after whom Dr Nayana Patel's now famous facility in Anand is named - who was born by a mother to save her daughter's marriage.

Social pressures on women to give birth cannot be subject to social judgement and need to be given the space for each individual woman to make the choice personally according to her circumstance. If medical science provides methods that are legal, safe, and in which she is able to find a voluntarily participating partner mother, those choices should be hers to make without judgement.

What about live-in relationships?

By outlawing surrogacy for live in relationships, the Surrogacy Bill is discounting the legitimacy lent to live-ins by the Supreme Court which recognises live ins as "akin to marriage" in everything from domestic violence laws to inheritance and property.

Also read: Family or predators? I was sexually abused, so were my mother and brother

The government should explain why it sets these SC rulings aside when it dismisses the legitimacy of couples engaged in live-in relationships to raise children.

With reference to homosexuality, surrogacy cannot be discussed until the Section 377 that criminalises it is repealed.

Homosexuals in India are not only having their love lives dictated to them, but they may love no one, not even a child, by law. The sentencing to life-long isolation for being gay is brutal and devastating.

In moral stance also, the law is lopsided and hypocritical.

If the government is morally against surrogacy per se, it should make no difference if it is opted for an Indian couple or a foreign couple or an NRI couple. Visa and custody issues have been far and few between and can be easily subject to international law and Indian regulation if the government had put legal mind to it. 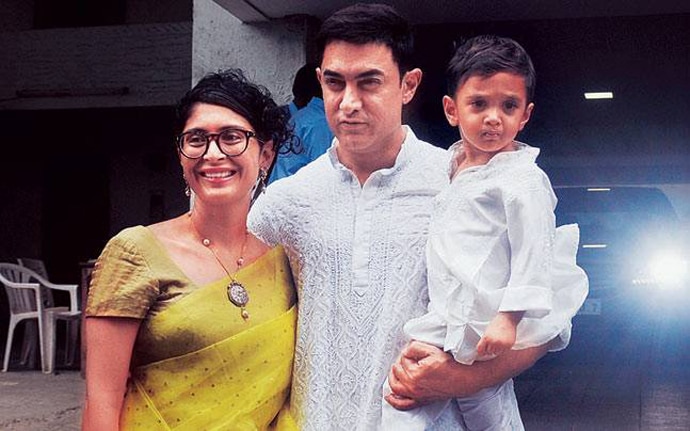 Medical complications prevented Kiran Rao from conceiving, hence the surrogacy route for Aamir and her.

The ban on foreign couples is more to reduce the headache of the government when dispute arises. It however manages to navigate these very well in adoption law. What would the government do if an adopted Indian child was abandoned overseas? The issue is not the biological origin of the child, but the regulatory mechanism that protects its interests.

By making choices between Indian parents and foreign parents, live in couples and married couples, the government is dipping its hand into moral judgement when it should restrict itself to regulating outcomes.

While feminists are up in arms about surrogacy, essentially the right to regulate the womb and its outcome should be the choice of the woman bearing the child alone. If surrogacy is legal and voluntary and comes with protection of the law, women should be able to choose who they carry children for and why and whether they believe a cost is owed to them. The false sacred of the womb is a perpetuation, which in this instance, a common thread between political and religious conservative right in the Roman  Catholic West, in right-wing Hindu, Muslim and Catholic India and amongst feminist groups.

Also read: Did Purvi Patel pay the ultimate penalty for being a good Indian girl?

When, in fact, Indian culture with its premium on life and birth has always been culturally comfortable with the concept of surrogacy, from the birth of Balram to Rohini to Vichitravirya, who fathered the children of Vyasa.

Culturally, we do not need to adopt a foreign and western puritanism towards regulating surrogacy.

Due to religious and conservative factions, nowhere in the world are definitive for surrogacy framed in law. It is either outright banned or ignored as a grey area. That does not mean surrogacy does not occur.

When foreign couples came to India, they came for several purposes - the cancer stricken from Fukushima, couples who just wanted more children but had grown older, gay couples, single parents who believed they had lost their chance to procreate.

It is impossible to deny that several surrogates who emerged unexploited benefited from the births.

The urge for a child cannot be subject to the moral judgement of politics and society. What it does need is a safe, regulated, legally binding environment and framework in which individual choices may be made.

#Indian Women, #Reproductive Rights, #Commercial Surrogacy, #Surrogacy Bill
The views and opinions expressed in this article are those of the authors and do not necessarily reflect the official policy or position of DailyO.in or the India Today Group. The writers are solely responsible for any claims arising out of the contents of this article.