The two former BJP presidents have no love lost for Modi.

The trolling of Sushma Swaraj will eventually be forgotten and dusted, but the political fallout and implications of the entire episode will be remembered. Because therein lies the state of things to come in the Bharatiya Janata Party (BJP) in the aftermath of the next general elections, if one carefully analyses the political side of this episode.

Isn't it curious that only two senior BJP leaders who are also key ministers in the Narendra Modi government — Rajnath Singh and Nitin Gadkari — have come out in support of the beleaguered external affairs minister and issued statements in her favour?

Isn't it rather strange that there has been a deafening silence from other BJP leaders within the party and the government? Except for soothing words of support from Rajnath Singh and Nitin Gadkari, Sushma Swaraj has been a lone warrior in her battle against trolls. No statements in her support have come from prime minister Modi himself or his favourite cabinet colleagues like Arun Jaitley or Nirmala Sitharaman or Smriti Irani or even BJP president Amit Shah. Except for soothing words of support from Rajnath Singh and Nitin Gadkari, Sushma Swaraj has been a lone warrior in her battle against trolls. [Credit: PTI photo]

It's rather strange and loaded with political significance. It shows how the BJP as a party may “vote” when it comes to post-2019 general election results if the saffron party performs poorly and finishes below the 200-mark in the 543-member Lok Sabha.

Political pundits have been intensely discussing about the post-2019 general election scenario and the question about Modi's leadership of the party from the point of view of BJP leaders and allies if the party fails to breach even the 200-mark.

Modi has been having a "Rajyog" for last 18 years and enjoyed uninterrupted power since then. He has never been an opposition leader and one doesn't know how he will perform in that role, if results of the next general elections were to constrict his political bandwidth significantly.

Moreover, his presidential style of governance and his style of functioning has earned him many political foes within his own party and among his alliance partners.

If the BJP fails to repeat its performance of 2014 and falls miserably short of the magic figure of 273 seats in the Lok Sabha even with alliance partners, but emerges as the single largest party nonetheless — not at all an unthinkable scenario — then the talk would inevitably veer around who would lead the National Democratic Alliance (NDA). It would depend on how many seats the BJP is able to garner on its own. 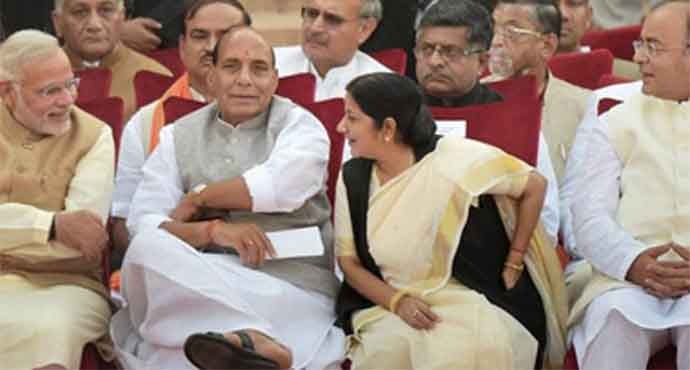 Modi's presidential style of governance and functioning has earned him many foes within his own party. [Credit: PTI photo]

If the BJP gets around 200 seats, but is still woefully short of a majority, then Modi would still be in the reckoning, though much would depend on a lot of political permutations and combinations and on how opposition parties, particularly the Congress, fare in the next general elections. But if the BJP were to fall to about 180 seats or even lower, knives would be out for Modi within the party.

The two former BJP presidents — Singh and Gadkari — have no love lost for Modi. As for Sushma Swaraj, she was openly in the LK Advani camp in opposing Modi's candidature as BJP's prime ministerial candidate in 2013, which he eventually got in September that year. Nitin Gadkari was poised to return as the BJP president at the time when the party was finalising its prime ministerial candidate.

Gadkari’s special and close relationship with the Rashtriya Swayamsewak Sangh (RSS) was well known — then and now. However, due to Arun Jaitley’s exploits, Gadkari was pipped to the post, Gadkari stepped down as BJP president and Rajnath Singh was eventually appointed his successor in 2013.

Rajnath Singh as the BJP president declared Narendra Modi as the party's prime ministerial candidate in September 2013 and the rest is history. However, as Modi's graph went up and up since then and Rajnath Singh lost in terms of political stature, it's quite apparent for political observers that even with the exalted title of Union home minister and an undeclared number two in the current government, Singh has been a virtually toothless tiger.

Singh may have been seething all this while but that hasn't refrained him from speaking his mind and issuing statements which are not at the behest of Modi or vetted by Modi. His support to Swaraj in the trolling controversy is one such instance which wouldn't have gone unnoticed by Modi. Gadkari joining this select bandwagon makes it all the more politically pregnant.

Folks, watch out for this in the coming months. After all, there's no smoke without fire.

#Lok Sabha elections 2019, #Nitin Gadkari, #Rajnath Singh, #Sushma Swaraj
The views and opinions expressed in this article are those of the authors and do not necessarily reflect the official policy or position of DailyO.in or the India Today Group. The writers are solely responsible for any claims arising out of the contents of this article.