This time it's on us to clean things up.

Before I left my house, I was anxious and nervous. The reason for these feelings was, most likely, my fear of paying attention to the less glorious, eye popping things India has to offer.

Furthermore, I was concerned about this trip's consequences on my identity. I wondered what would happen once I saw these different aspects of the country, and its effects on my muse.

This trip, my first stop was Bombay, my parents' hometown. On my way from the airport I couldn't have been more apathetic to the sights, scents and sounds I encountered.

Since my assistant joined me on the trip and this was his first visit to India, I felt the responsibility to show him the great things India had to offer. I felt somewhat not at ease to take him to less tourist type areas.

Unfortunately when it came to the cleanliness of India, my Western friend was very much disappointed, but more importantly it disconcerted me on the highest level.

I was convinced that the much-talked about initiative of, Prime Minister Narendra Modi's Swachh Bharat, also known as "Clean India" officially launched on October 2 2014 had already left its marks on the country.

I was a bit surprised to see this was not exactly the case. Ironically, during my stay the public celebrated two years for the campaign.

I thought it would be a good learning experience to take a trip with my Israeli Indian friend to Madhya Pradesh. For the first time we were exposed to the second class Indian train ride. It was not as bad as I expected. If I may add, I actually liked it.

This being said, once our lunch arrived it brought up some new doubts and questions in regards to the "Clean India" initiative and its progress.

We got our aluminum pack with traditional food. After finishing it I waited for someone to pick up and dispose of our lunch packs. I expected, that just like every minute someone was crossing the corridor offering something else to purchase, somebody would come and take the remainder our lunch and throw it away but not a single person showed up to do this.

I kept waiting but the air blowing from the barred glassless windows of the sleeper cabin, made the cover fly straight on to the face of the passenger sitting opposite from us, almost covering his clothes with dal.

After a while a nice student sitting in our cabin just threw it out the window - just like that. It was so natural to him, he even smiled.

I was thankful and shocked at the same time. After that we didn't allow him to throw the second pack, we carried it until we encountered a beggar in one of the stations and gave him the leftovers.

Observing these incidents made me think that in order to achieve a true Clean India for the benefit of its own people this campaign should start with education. 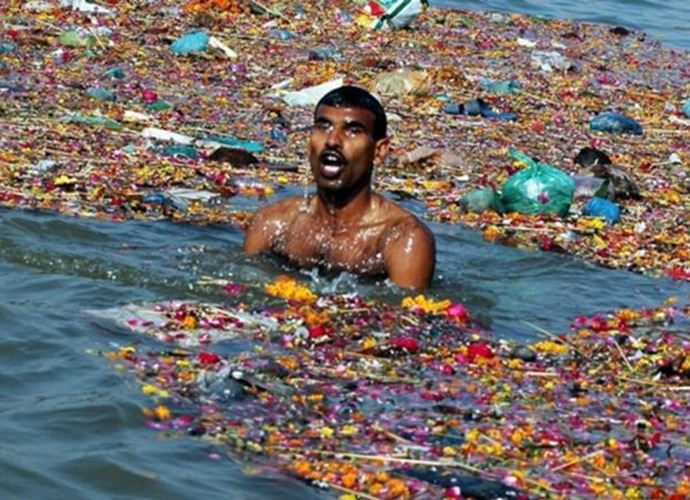 There is still a long way to walk to achieve a Swachh Bharat. (Photo credit: Reuters)

The big question is how would you educate a billion people who are already used to their local customs? Even Modi noted, "The campaign cannot be achieved by budget allocation alone".

There are many steps the Indian government should apply in order to achieve maximum success in this most important matter.

I believe the first step should be to start at all school classes focusing on the importance of hygiene and practical ways of stopping the contamination of one's own environment.

Second, installing garbage cans at as many places as possible. Many times I watched locals walking miles looking for a dustbin eventfully giving up and throwing it in one of the street corners.

Although the India's cleaning market is growing and international companies are trying to understand the Indian population's needs, I feel that those in charge will need to figure out the best way to motivate the local market.

Hence, India should offer scholarships to students abroad to learn water technologies with the promise of returning and settle down back in India and guarantee jobs in different aspects, which have to do with cleaning the country with the help of the "Clean India" initiative.

When it comes to tourism India has much to offer but was still only ranked 52nd on the global travel and tourism list in 2015 unlike China, which was ranked fourth on the list with revenues of 52 billion dollars. Most tourists travelling to India face severe diseases caused by lack of adequate sanitation and food safety.

There is no doubt in my mind that it takes bravery to look at yourself in the mirror, and know that change must be made. Modi government has done just that, and targeted India's biggest problem in last few decades for the first time with huge public coverage.

There is still a long way to walk. We must start by taking one step at a time with our main goal in mind - Clean India. If we want to become a superpower, in all walks of life, we must take care and make sure we are not the ones killing ourselves - it's on us this time to clean things up.

#Clean India, #Narendra Modi, #Swachh Bharat
The views and opinions expressed in this article are those of the authors and do not necessarily reflect the official policy or position of DailyO.in or the India Today Group. The writers are solely responsible for any claims arising out of the contents of this article.

The writer is an Indian living in Israel, PhD candidate in middle eastern studies, expert on relations of India with the middle east, social activist enthusiastic and writer.