BJP’s response to attack on Swami Agnivesh shows there is method, and a message, in the madness

From Kathua to beef lynchings, there is a pattern here.

The bashing-up of a 79-year-old saffron-clad monk, Swami Agnivesh, allegedly by a saffron mob on July 17 in Jharkhand, generated shock and outrage. The BJP, the party ruling the Centre and Jharkhand, soon stepped in, as it was its duty to.

But not quite in the manner one would have expected. Robe no shield: Even the wrong shade of saffron can be attacked. (Photo: Twitter)

No arrest has been made in the case so far. Agnivesh has claimed his attackers were BJP Youth Wing workers. However, when a BJP leader did talk on the issue, it was to term the monk a “fraud who wears saffron to deceive simple Indians”.

State minister CP Singh said: “I think he sponsored an attack on himself. He is a huge hypocrite. He talks against Hindus, makes anti-national comments, supports Kashmiri separatists and naxals.”

As far as I know, Swami Agnivesh is a person who survives on foreign donations. The saffron dress that he wears is to deceive the simple Indians. He is a fraud and not a Swami. He had himself planned this attack to gain popularity: CP Singh, Jharkhand Minister pic.twitter.com/P3KDgqrvFC

What a neat clubbing of everything deemed offensive in “new India”.

On the day of the attack, BJP spokesperson Tajinder Pal Singh Bagga tweeted a video of Agnivesh speaking on the Amarnath Yatra, asking “everyone” to “watch this Bakwas of Pakhandi Swami Agnivesh”.

The Virat Hindu, it turns out, is not so “virat” (large) after all. He is petty, narrow, rejecting not just other religions, but shades of Hinduism not of the same shade of saffron as his.

The episode reinforces another lesson: violence is no longer about the isolated act itself. It’s about the spectacle of the act, which the ruling party will use as another peg to hang its dangerous narrative on.

Message in the madness

Swami Agnivesh is an easily recognisable face. With his long public life, his work for bonded labourers, and his fair share of controversies — his comments against the Amarnath yatra and other religious beliefs, his acrimonious involvement with Anna Hazare’s anti-corruption movement, even a brief stint in Bigg Boss — have ensured that Agnivesh is a name many Indians are familiar with.

Such a man being beaten up brings rich dividends for the BJP.

From Kathua to the several beef lynchings across the country to Agnivesh now, there is a pattern here. 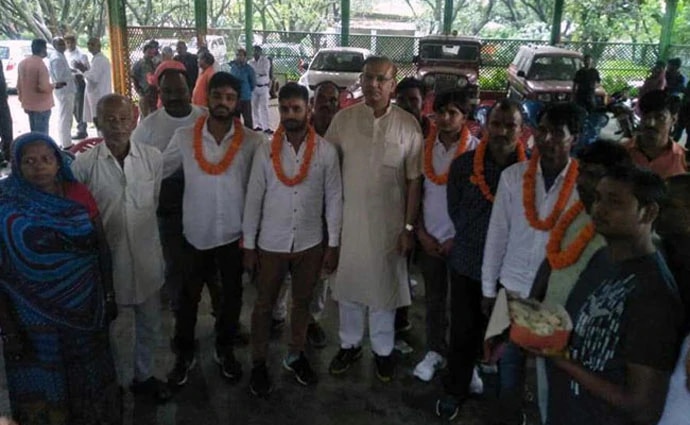 Ring of glory: The ruling party has left no one in any doubt about where its support lies.

An act of violence will be committed, which the BJP will not be openly involved in. But then, through statements and actions, the ruling party will spell out the victim’s crimes — beef, Kashmir, Naxals — and leave no one in doubt about its support for the perpetrators.

This is a warning bell as well as a dog whistle.

If a man as prominent as Agnivesh can be bashed up, think of what could happen to nameless, faceless activists who work to rehabilitate Maoists, who dare to believe Kashmiri separatists have human rights.

If a saffron-robed monk can be attacked, think of what could happen to someone wearing a skullcap or a cross.

And to Hindus who had been living apparently suppressed in their own land by minority-loving governments, your time has come. You can express your emotions.

The mob violence has been accompanied by a set of terms becoming increasingly common in the public discourse — “anti-national”, “Naxal sympathiser”, “anti-Hindu”. All of these are nuanced terms that cannot have one set definition. No one organisation or party can claim a monopoly over what nationalism is, or even attempt to define a millennia-old religion. Attempting to rehabilitate and mainstream Naxalites does not just help them, but the state too.

But the BJP is using and overusing these words so many times that they lose all meanings as terms, and only serve as triggers, to evoke a Pavlovian, bloodthirsty response.

The BJP is either ruthless enough to poison society for the sake of one election, or ambitious enough to actually be working towards a monolith, monochrome Bharatvarsha. This is a betrayal of not just the Indian Constitution, but the pluralistic, flexible nature of Hindu dharma, which the BJP swears by.

Also read: SC wants Parliament to enact anti-lynching law. But will that be enough?

#Hindutva, #Jharkhand, #BJP, #Swami agnivesh
The views and opinions expressed in this article are those of the authors and do not necessarily reflect the official policy or position of DailyO.in or the India Today Group. The writers are solely responsible for any claims arising out of the contents of this article.