Is fight for eastern Ghouta the end of civil war in Syria?

Many wars are being fought in the troubled country, but the only one worth standing up for is the battle fought by the unarmed, innocent civilians.

The capital city of Syria, Damascus, is among the most ancient cities of the world and had been a prosperous trading hub in West Asia from the time immemorial. Various narrations mention that even the Prophet of Islam used to be a part of the trade caravans that used to travel from Mecca to Shaam (modern-day Syria) frequently.

Any war is nothing less than hell. Even if it lasts for a brief period, it can change the contours of the physical and political landscape of the involved nations beyond recognition. For instance, after the Arab-Israeli war, the world saw a tiny Israel, which was once hanging on to a precarious toehold in West Asia along the Mediterranean shores, capturing the large chuck of land belonging to Palestine and soon after it began bestriding the region.

In the recent years, we have seen how the political landscape of America rapidly changed after she began bombing nations as part of its war against terror, which devastated Iraq, Afghanistan and other nations. It own citizens came out on the streets to protest against the war strategies of the country.

West Asia is still coping with the ripples of the Second World War - it has witnessed way too many wars. Some are still going on in the region. The Saudis are fighting a war in Yemen for the past three years which Prince Mohammad bin Salman had predicted would last for only two months. Now and then, Israel keeps flexing its muscles in the region - Israel’s assaults in Palestine have become a cause for concern as the attainment of peace between the two nations seems more and more distant now. And the dissent among Shia-dominated Iran and the Sunni Saudi Arabia has done the most damage in the region. 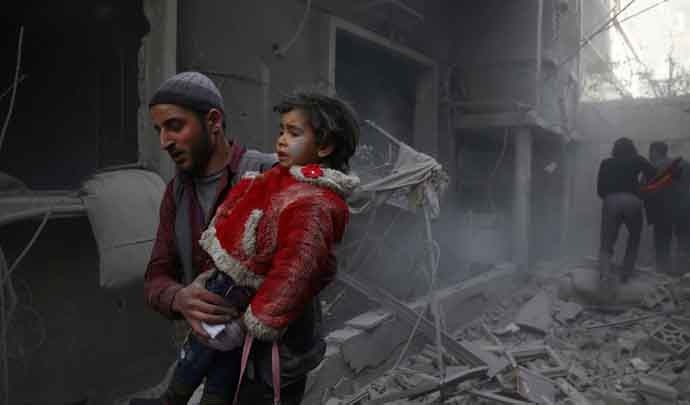 The different stands these two most powerful nations take in the region often results in the two fighting proxy wars.

In the barbarous seven-year-long war in Syria, around 400,000 have been killed and a multitude are still dealing with the traumatic catastrophe that the bloodshed brought with it. As a result, many ghost towns have emerged in the country. The world has witnessed the refugee crisis of a kind that will haunt our collective memories for many years to come.

The images and videos of the recent bombing in the country that have surfaced on social media are heart-rending and deserve to be mourned for the sake of humanity.

As you read this, eastern Ghouta is witnessing the bloodiest assault by the Syrian regime. The shelling in the Damascus suburb has continued for the 16th consecutive day. And the latest assault includes alleged “chlorine attack” by the Syrian government, which has killed around 30 people.

Yesterday (March 6), 70 people were killed in bombing by the Syrian government’s war planes.

At the turn of this violent century, humanity has lost its place in our blood-thirsty world. We hardly care for the wails of millions of children stranded in the war-torn Syria, Yemen, Gaza, Myanmar, the other countries in West Asia and elsewhere in Africa, who are living under a dagger of death hanging above their heads. The childhood of these children - period of innocence - is getting marred by the sounds of gunfire and shelling. While some end up losing their families, others see their homes getting destroyed. There are no schools for the children, no normal life, no food. And not a soul among the decision-makers of the world, who care for their miserable lives.

What we are witnessing in Syria is a civil war turned into a war of many interests due to the meddling of many other countries - Saudi Arabia, Iran, Turkey, Russia, Israel and the United States of America.

Turkey is fighting the Kurds in Afrin near its border because she considers them “terrorists” and the US is supporting the same Kurdish forces for its own interests. The Kurds are adamant on forming an independent nation of their own, which worries the Turkish government. Russia is supporting Turkey in its war against the Kurds.

Even the rebel-groups fighting in Syria are at dissent with each other. In the foreshortened perspective of the past two months, it would be foolish to attempt any analysis of the great contingency that awaits us in Syria.

Many are of the opinion, including Syrian President Bashar al-Assad, who has been holding his presidential office for the past 18 years now, that the war in the country has nearly reached its end with the fierce offensive of the Syrian regime’s forces in Ghouta, situated on the outskirts of the capital.

In the past two weeks or so, around 440 have been killed in the region. The Syrian government’s decision to cut-off food and medical supplies in the area has resulted in hospitals facing a severe shortage while the number of wounded have been soaring. While the civilians have been deprived of food, children have been shifted to underground shelters.

Assad has a strong ally in Russian President Vladimir Putin, who has supported the Syrian regime ever since the war broke out in the country as a result of the Arab Spring. Now, the two countries feel that their goal is not distant. In the fight for Ghouta, they envisage the end of the bloodiest war the world has witnessed in the recent times.

Many wars are being fought in Syria, but the only one worth standing up for is the one fought by the unarmed, innocent civilians caught up in the midst of this disastrous situation in Syria.

They need hope, and if the world doesn't not speak against their unrelieved despair, humanity will certainly lose its authority on earth forever.

#Eastern Ghouta, #Civilians, #War, #Syria
The views and opinions expressed in this article are those of the authors and do not necessarily reflect the official policy or position of DailyO.in or the India Today Group. The writers are solely responsible for any claims arising out of the contents of this article.