Tamil Nadu elections will go down to the wire

Will Jayalalithaa get a second consecutive term in office or will the state choose the one family DMK?

"God always sits inside the shrine, the public stays outside." This was an AIADMK activist's interesting explanation about the seating arrangement at Jayalalithaa's public meetings.

While Jaya and the candidates she introduces sit in an air-conditioned enclosure on stage, the masses face the fury of the sun. But the "loyal" AIADMK cadre does not see anything wrong in the world of difference between 18 degree coolness and 43 degree harsh heat. Not even when four people have died due to heat stroke, as a result of being shepherded to Jayalalithaa's public meetings at 2.30pm in Virudhachalam and Salem.

"Their time had come, God wanted them. How can you blame Amma," said another AIADMK worker, rather clinically. In the AIADMK book, Amma is never wrong.

At her public meetings, Jayalalithaa sits on stage, alone, like a strict principal. The table and chair complete the setting. Her party candidates stand, bent at the waist, hands folded in a namaste, as if punished for not having done their homework. AIADMK is a political party like no other. That is its biggest plus. It is also a huge negative. 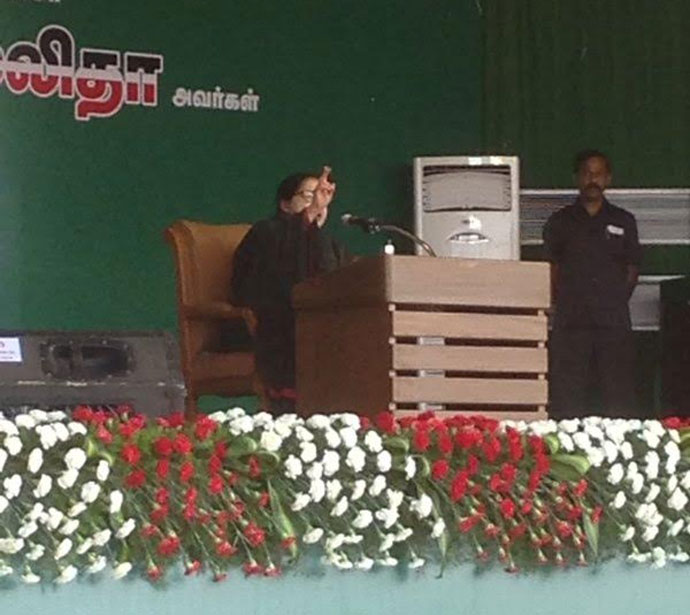 Jayalalithaa sits on stage, alone, like a strict principal.

Because you need someone to tell Jayalalithaa that in this age and time of social media and instant television, the imperiousness does not make a pretty picture. Especially at election time. The three-tier system - Jaya, candidates and the public - betray a touch-me-not attitude that is hardly the persona politicians should project.

No wonder, the DMK refers to Jayalalithaa as the "Maharani" at every street corner meeting. The reference and the Jaya image at her public meetings, when juxtaposed, are doing immense damage to the AIADMK, influencing the neutral voter away from the ruling party.

Not that air conditioners are not at work at public meetings addressed by DMK leaders or inside their campaign vehicles. But none of them portray the "Me alone" image of a Jaya.

The DMK, for effect, is also contrasting Jaya flying in and out by chopper to 93-year-old Karunanidhi who is travelling by train. Or MK Stalin, who by now has tried every possible kind of vehicle on the campaign trail - from bicycles to scooty to an autorickshaw, in the hope that all of them will take him to Fort St. George.

But elections are not won or lost merely on perception. The AIADMK is riding on the welfare agenda it unleashed in the last five years, hoping that the 5.8 crore voters in "yeh dil maange more" mode will give the party another five years in office. All eyes are now on the AIADMK manifesto that Jayalalithaa will unveil next week. Will it unleash a fresh round of freebies at the taxpayer's expense to get votes into the AIADMK kitty?

In a departure from the 2006 and 2011 polls, the opposition parties have not indulged in competitive gifting. That is because the feeling gaining ground is that the youth are more worried about getting jobs (70 per cent of engineering graduates in Tamil Nadu are unemployed) instead of only getting free laptops.

That the freebie and subsidy culture has resulted in a culture of lazy contentment among the masses that many do not want employment. Industrialists in the textile belt of Tiruppur point out how a large part of their 11-lakh-strong workforce now comes from the Northeast even as unemployment in Tamil Nadu increases. 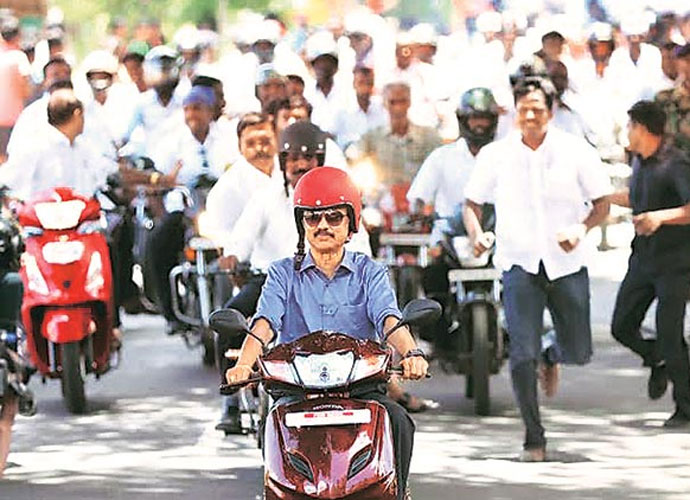 MK Stalin has tried every possible vehicle on campaign trail - from bicycles to scooty to autorickshaw.

Prohibition is another factor that could play a silent role in this election. Even though Jayalalithaa, rather belatedly, announced prohibition in a phased-out manner, it has not gained the traction that Karunanidhi's "will jail every liquor consumer if he comes to power" promise has.

How the women voters will vote on this one issue, given the immense damage TASMAC liquor shops have done to several lower-income group families in Tamil Nadu, will be critical.

Accessibility is another crucial factor. The masses do not talk about it but the industry does, in hush-hush tones. The comparison is immediately made with Chandrababu Naidu, the chief minister of Andhra Pradesh who rolls out the red carpet, to woo Chennai-bound industry to the Sri City SEZ in neighbouring Chittoor district in his state. What's more, Naidu is accessible, spends time with the corporate honchos.

In contrast, Tamil Nadu industrialists crib about being clueless about how to get through to Poes Garden. Her ministers do not go beyond the "Amma will decide'' line.

So the question that arises is when industry, women, youth have reasons to be unhappy with the present regime, will it get Jayalalithaa a second consecutive term in office? What will go in her favour is the fear of one family rule that she keeps reminding people about.

DMK rule in the past has been associated with goons ruling the roost and there is no evidence yet to show that the party of the rising sun has turned a new leaf. Then, of course, there is the 2G corruption that AIADMK speaks of though it squares off against Jayalalithaa herself having been sent to jail in the disproportionate assets case before being acquitted by the Karnataka High court.

The BJP is not much of a factor in the Tamil Nadu elections, with all its major 2014 allies deserting it. But given how Chennai's parliamentary strength influences New Delhi's power matrix, the BJP-AIADMK equation is important. Will Prime minister Narendra Modi be happy with Jaya back in office?

My understanding of politics says no.

Modi needs Jaya's support in the Rajya Sabha and a weakened Jaya can be pushed around more easily than a Jaya in power in Chennai. BJP president Amit Shah has already called Tamil Nadu's regime "the most corrupt'' and that would not please Jayalalithaa one bit.

Tamil Nadu has always been a difficult state to predict, partially because people here are apprehensive about speaking their mind. An elderly woman in Erode cribbed endlessly to me about not having got the housing benefits she thought she deserved but did not forgot to add, without my asking, that her vote will go to Amma. She was not sure if I was a journalist or an AIADMK partyman.

People in Chennai who were badly affected by the floods, articulated their anger with the tardy response of the administration, off camera. But once the camera rolled, they were all praise for the government.

A few others in Coimbatore, rather conspiratorially told me last week that "something has changed in the air in the last two weeks''. The problem with such a vague prognosis is that everyone is smelling victory.

#Amit Shah, #Karunanidhi, #Jayalalithaa, #Tamil Nadu Polls
The views and opinions expressed in this article are those of the authors and do not necessarily reflect the official policy or position of DailyO.in or the India Today Group. The writers are solely responsible for any claims arising out of the contents of this article.