Does Jayalalithaa have a chance of coming back as Tamil Nadu CM?

Of the four states which go to polls next month, Tamil Nadu is the trickiest for pollsters to predict. Since its formation, the state has been witness to the bipolar contest between two Dravidian parties - AIADMK and DMK. The Jayalalithaa-led AIADMK won the state elections in 2011, with 150 of 234 seats. Jaya repeated her stellar performance in the 2014 Lok Sabha elections, bucking the national trend helped Modi win, and bagged 37 of 39 seats.

For the first time in many years, Tamil Nadu is going to witness a five-cornered contest - AIADMK (+TMC), DMK (+Congress), PMK, BJP and PWF (CPM+CPI+MDMK+DMDK+VCK). This has made the polls harder to predict as the result boils down to each seat.

Ultimately, whoever the BJP, the PMK and the PWF can damage more may lose the polls, as we saw in Bihar. They may not win on their own, but could act as the real spoilers.

AIADMK and DMK have taken turns alternatively since 1984 to rule the state. Going purely by the trend of state elections, it is DMK's turn to win the elections and form the government in 2016. Despite being reasonably satisfied with the current government's performance, Tamil Nadu's people have voted out the ruling party in successive polls. Nearly 66 per cent of respondents in a CSDS survey stated they were satisfied with the incumbent government's performance, but Amma still lost to Karunanidhi in 2006, just as he conceded defeat to her in 2011. However, we have some reservations about the way these questions were framed in the CSDS survey.

Most other parties (national as well as regional) have formed alliances with both the major national parties during the state elections in different years. For example, the Congress had allied with AIADMK in the 1980s-1990s and hopped onto the DMK bandwagon now*.

A joint analysis of the results of the Lok Sabha and Assembly elections in the last three decades yields another interesting trend. No party has won both the Assembly and central elections between 1984 and 2004. DMK won three elections in alliance - from 2004 to 2009 - while AIADMK has won two consecutive elections, and purely on the basis of this trend, Amma is slated to win the 2016 elections as well, making it three in a row.

Winners of Vidhan Sabha and Lok Sabha Elections held in the state since 1984: 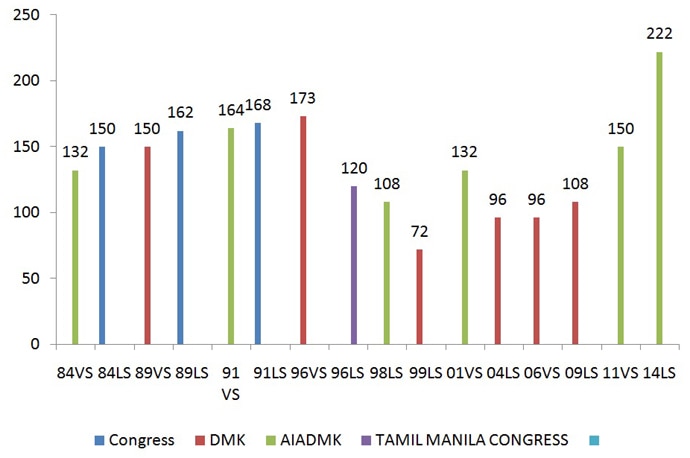 Winners of Vidhan Sabha and Lok Sabha elections held in the state since 1984 Source: www.politicalbaaba.com

(i) In LS, whichever party wins the maximum number of seats is considered the winner.

(ii) LS tally has been multiplied by six to arrive at the Assembly leads for better comparison.

Leadership ratings have been the key determinant of election results in this century. The leader who enjoys popular support goes on to win the state/Lok sabha polls.

Unlike three other states going to polls - Assam, Kerala and West Bengal - where they play a crucial role in determining the results, the minorities in Tamil Nadu is limited as they account for only 11.5 per cent of population. Dalits play a major role as they are one-fifth of the population.

Support base of various parties

Hindus account for 88 per cent of the state population, Muslims 5.5 per cent and Christians 6 per cent. SC/ST account for 21 per cent of the population. Minorities and Vanniyars have traditionally backed Karunaniidhi's DMK. The vote banks of many parties are overlapping, which makes the contest quite interesting. Urban seats (47/234) are also considered as DMK traditional strongholds.

Why Jaya may win?

The state has recorded a GDP growth of more than 14 per cent in the last two years (2004-05 prices), which is higher than the national average. It is the second largest contributor to India's GDP. It is the most urbanised state in India by geography and population. The state topped with a share of more than 15 per cent in the total jobs generated in the registered manufacturing sector in India in 2013 as per ASSOCHAM.

DMK essentially lost the 2011 polls due to three key factors - popularity ratings, corruption scams in UPA and poor electricity supply situation. More than half the respondents of the CSDS survey felt the state's administration had deteriorated during Karuna's rule. It cost the government as 17 per cent listed electricity supply as one of the main issues in the elections.

While critics could argue that during her tenure the financial health of the state discom has deteriorated, voters actually care more about power cuts than the profile of discoms.

With DMK not being able to form a mahagathbandhan to take on the ruling AIADMK, the anti-Jaya votes would be split. This may benefit her party and weaken Karuna's push to reclaim the CM's chair. Most notably, DMDK's decision to not ally with DMK has come as a relief to Jaya as both Karuna and Vijaykanth belong to the Telugu-speaking community and the DMDK is expected to cut into DMK's vote bank.

Why Karuna may win

The trend of past three decades of state elections favours DMK. If the trend is reversed, we will see a situation similar to the years 1977-1980-1984, when the AIADMK won successive state elections.

Jaya's conviction in the disproportionate assets case has made her case weak. She is currently out on bail. If her bail is revoked, she would have to relinquish her CM chair once again and appoint a dummy.

If she is sent to jail, there would be chaos in the party and the public may yet suffer. It is another matter that the BJP may not push for this situation considering it needs her support in Rajya Sabha. One of the prominent reasons for DMK's loss in 2011 was the corruption allegation against its ministers in UPA-II.

While Amma received a lot of praise for her Amma canteen and Amma vegetable markets, which have helped the poor, the poor handling of Chennai floods has cost her some votes. The rescue operations were largely seen as done by the Centre, social media groups and public themselves. Jaya's absence from the action (ostensibly due to health issues) has not been appreciated.

What do opinion polls project?

Numerous polls have been released and the suggestion is that it is likely to be a close election, atleast as of now:

Compared to the 2014 Lok Sabha elections, the following outcomes are highly certain:

b.    The DMK alliance is highly likely to gain Share

c.    Many of the opposition parties like PMK and smaller parties are likely to lose share to the DMK alliance

Given the above circumstances and the fact that the vote share gap between AIADMK and the DMK+Congress alliance in 2014 was 16.6 per cent, the DMK alliance can only win the 2016 polls if it gains a significant share from the AIADMK. The good news for the DMK is that it appears to have made some progress since the 2014 election. This is probably due to the Jaya government's handling of the floods in Northern Tamil Nadu as well as Stalin's positive campaign management. Since the second half of last year, Stalin has been touring across all the 234 constituencies under the Namakku Naame tour. The agenda of the tours was to connect mostly with ordinary voters and it appears that it may have had an impact on party choice.

However, none of the polls shows the DMK is ahead by a wide margin and that is a significant plus for Jayalalithaa. The undecided typically break in favour of the leading party and at the moment, it appears to be the AIADMK. Secondly, none of the polls shows a massive loss for the AIADMK. The PT poll, for example, appears to show an 11 per cent drop for the AIADMK but the poll also shows that 13 per cent of the voters haven't made up their mind yet. The real losses could be closer to seven per cent, which still gives the AIADMK a fighting chance.

The two big factors to observe are how Stalin+Karunanidhi are performing versus Jayalalithaa on the leadership question. They are at par at this moment. The second big factor to observe is the vote share and the swing of parties other than the AIADMK and the DMK alliance. The greater the swing in favour of those parties, the worse it becomes for DMK alliance; the reverse would benefit the DMK.

Tamil Nadu is witnessing a cracker of a contest. Initial reports suggest the trend could change this time. If it is, there will be serious doubts about the prospects of DMK in the state politics in the long run. The leadership factor, undecided voters and the smaller parties could, in the end, determine the winner - in a nail biting finish.

#AIADMK, #Jayalalithaa, #Tamil Nadu Polls
The views and opinions expressed in this article are those of the authors and do not necessarily reflect the official policy or position of DailyO.in or the India Today Group. The writers are solely responsible for any claims arising out of the contents of this article.