As I begin to write this piece, a clutch of Sharad Pawar's "mahila party workers" is assembling an effigy of Tanmay Bhat. Give yourself a moment to let that image sink in. Now, by the time you read this, the mahila workers will proceed to set it ablaze at Mumbai's Nariman Point.

Don't worry, it'll be on TV. The NCP's Mumbai president Surekha Pednekar was nice enough to send out a mass SMS in the afternoon inviting journalists to cover the effigy-burning. I'm going to repeat that one more time just so we're clear: Tanmay Bhat's effigy to be burnt at Nariman Point.

Also read: Ignore like I did if you didn't find Tanmay Bhat's spoof on Sachin-Lata funny

Too much gyaan has been given already by everyone with a microphone within ten yards, so I'm going to spare you that at the very least. What I can do, if you'll permit, is list what I see as the five grand hypocrisies that L'Affaire Tanmay throws up. I've always held that there are two things that amplify national hypocrisy more than anything else. One, terrorism. Two, humour. So here goes:

You could argue endlessly and subjectively about the quality of the humour, but is there anyone out there really suggesting that age and accent/voice haven't been fodder for humour in this country before? Far more "sensitive" subjects, including mental illness and disability, remain kosher. Suddenly age and accent aren't. Neat.

2. Second, the breathtaking hypocrisy of comedians themselves. When the Tanmay story boiled over this morning, I got in touch with another popular Mumbai-based comic to invite him onto a panel to discuss the controversy.

I was hoping for a simple yes/no answer. Instead, what I got was the most grandiose gyaan one could hope for on a Monday: "I have a policy against doing TV news appearances. Plus we are beyond redemption on such issues. No amount of think pieces and TV debates can solve the problem. Only ends up polarising more people and fuelling the anger on both sides." A comedian who basically thinks it isn't worth talking about anymore. Neat. 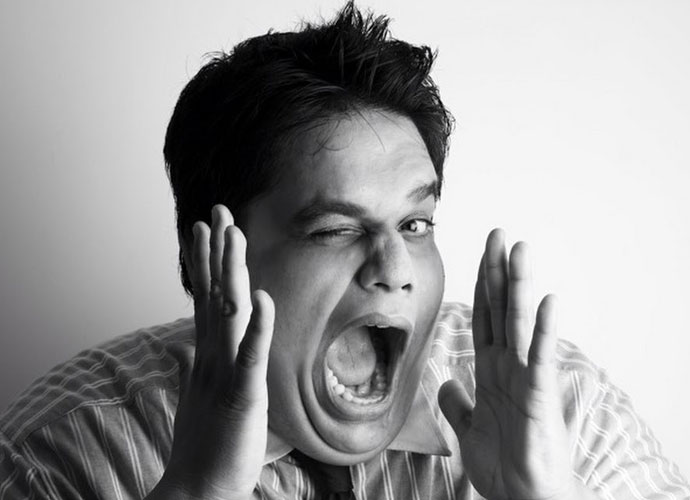 Tanmay Bhat in a spot of bother.

Tanmay and AIB have refused so far to join the conversation. That's entirely their prerogative, especially when there's an FIR on Tanmay and angry political workers are prowling the streets. But isn't that precisely when they should be part of a conversation? If humour is a movement - and it should be - why a selective approach? Whether intentional or not, the video is now a national talking point. Isn't that precisely when more voices should be heard? Does viral silence really help after a viral video?

3. Third, the delicious hypocrisy of Bollywood: A fraternity that shrinks like a gang of snivelling cowards (it largely is) when members come under political attack, but steps forward to score some easy outrage points. Let's be clear: the chest-beating is happening only because it's Sachin Tendulkar and Lata Mangeshkar we're talking about. It's outrage on a platter. Two Bharat Ratnas, both Marathi legends, both enormously popular and loved. Cower under a shroud of silence if it means even a remote possibility of a backlash. But with Lataji and Sachin as human shields, chalo boss!

4. Both Lata and Sachin have been well-advised to decline commenting on the video. Let's also remember they're both icons who've used their own celebrity status to stay above issues in their fields - issues they perhaps could have weighed in on. Who cares! They're icons/legends. For all the noise around the video, let's be clear: Tanmay knew what he was getting into when he made the video. Anyone even remotely suggesting that he didn't (including him) is either lying, or stupid. But Hypocrisy Point #1 precludes this.

5. Finally, workers of certain parties threaten to commit violence against Tanmay. Social media brims with open calls to bash that fatso so joke-woke sab bhool jayega. I include myself in the many millions who are no longer alarmed by such easy calls to violence. Let's quietly accept that we're tolerant of far worse than calling Lataji a wrinkled old prune.

Post your comment
#AIB, #Lata Mangeshkar, #Sachin Tendulkar, #Tanmay Bhat
The views and opinions expressed in this article are those of the authors and do not necessarily reflect the official policy or position of DailyO.in or the India Today Group. The writers are solely responsible for any claims arising out of the contents of this article.