People gathered at the funeral were shouting 'Kendriya Sarkar Murdabad'.

It ended where it started for him. The sun is setting, its rays reflect on the coffin. Nothing has changed, except that he is dead and is surrounded by his classmates, friends, and family, who have come to bid final adieu.

The plank of the coffin, in which his body arrived, is lifted. People have gathered in large numbers and express their grief at the sudden death of a top security officer.

India's premier security organisation, the National Investigation Agency (NIA), which was formed to combat terror has lost deputy superintendent Mohammad Tanzil Ahmed. He was shot dead while returning from a wedding at midnight with his wife and two children in Uttar Pradesh's Bijnor - his home town.

Dressed in white kurta-salwar, men of all age groups have thronged the Jamia Millia University premises where Tanzil's body has arrived. On the coffin lies the tricolour, which reminds everyone that he is a martyr. The family members are anguished, anger surrounds the place where his body is placed. "Not a single official from the Central ministry has come here, they don't want to recognise him as a martyr," says his relative as he addresses a group of youth.

Top officers from the NIA, police and Border Security Force (BSF) - which he was initially recruited to - are paying their homage. Yet, no signs of any minister.

He was instrumental in clamping down on the homegrown terror outfit Indian Mujahideen (IM) and had a big role in the arrest of its chief Yasin Bhatkal in 2013.

Lights are turned on, the sun has completely set. The BSF vehicle in which the body arrived is decorated with flowers. People are taking photographs of his body which is covered, and only his face is visible. Pieces of cotton have been inserted into his nose, to prevent air in. 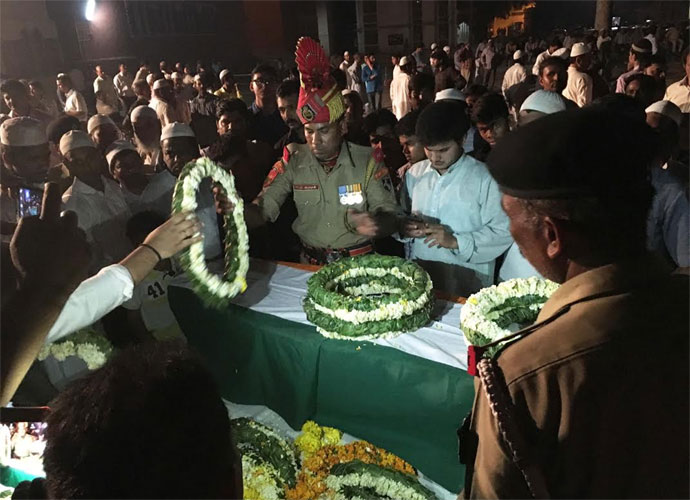 Tanzil was part of a team which was probing the Pathankot Air Force Station attack and had handled several high profile cases in the past. He was on leave after a five-member joint investigation team (JIT) from Pakistan - which was sent to investigate the Pathankot attack - left.

Reports say that he also played a role in busting an Islamic State (ISIS) module which led to several arrests, including those in Delhi. Investigation agencies haven't ruled out a possible terror angle in the attack.

"He was a real life 'Singham'," says a neighbour to his friend at a corner of the hostel building.

Flowers are being showered; he is a hero for many tonight. His body lies adjacent to the place where he took his first step towards joining the security agencies. "He joined NCC (National Cadet Corps) here and was my close friend. I used to live in the hostel here and he was my mate there too," says a man, who has come wearing formal garments.

Tanzil was the alumnus of this university. It is the same university that the then the chief minister of Gujarat - and now prime minister - Narendra Modi described as one which was run on government money and yet was ready "to spend money on lawyers to get terrorists out of jail", after the Batla House encounter in September 2008.

Today, a soldier, whose foundation was laid at the university, lies dead on its premises while he was serving to eliminate the same terror which his university was accused of being the advocate of. The media has gathered with its camera and lights rolled out. 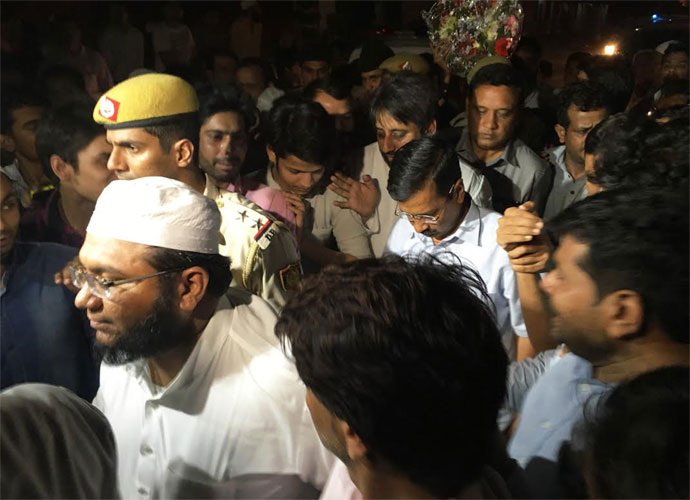 Beacon sounds start to get louder as people rush to a car entering the varsity. It's Delhi chief minister Arvind Kejriwal surrounded by the media as he steps close to Tanzil's body. He prays for the departed soul and announces Rs 1 crore for the family, which family members at the scene refuse to take, citing bigger issues like the expenses of Tanzil's family and education of his kids. The chief minister leaves and the police make way for him as those gathered at the site raise slogans against the package for the family.

Men are taking pictures of his body while policemen try to prevent the crowd from causing harm to Tanzil's body. His family members stand by his side.

Suddenly, an angry man shouts, "Allahu Akbar" (God is great). He tells mediapersons that Tanzil's family should be taken care of as the compensation being given isn't enough for his wife and two kids.

Tenzil's wife, Farzana, suffered four bullet injuries and remains in critical condition at a hospital on the outskirts of Delhi. People in groups are conversing about Tanzil the man. Some say he was honest and others are recollecting memories with him. "Riyaz was the warden of the hostel when Tanzil was here," says his classmate, who was also his roommate.

The atmosphere is reverberating with Islamic verses and suddenly someone calls people to make rows to offer jinaza (last rites). 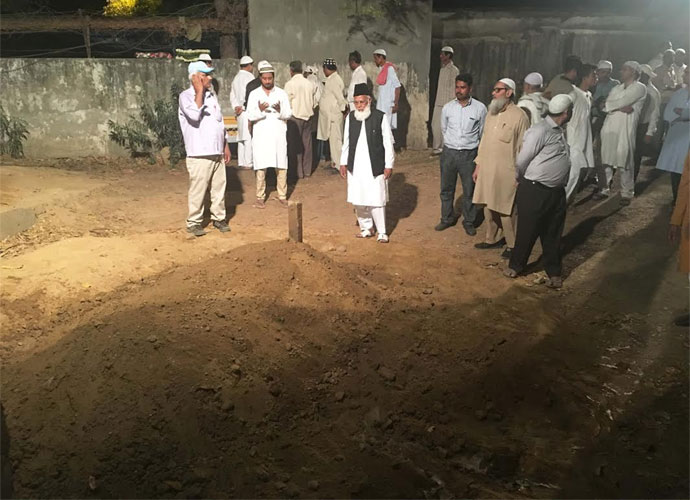 After the burial (Photo: Ieshan Wani).

His non-Muslim friends and colleagues stand with their heads down, as namaz is being offered. All of them have identification cards around their necks with NIA printed on them, as they stand quiet. There is a silence as the imam (priest) is holding a prayer.

The lull breaks as a tall man starts to talk to the media angrily. "He was doing the investigation of Samjhauta Express blast, Pathankot attack, Bijnor bomb blast, why wasn't security given to such an officer?" he questions, demanding compensation for the family and asks the Central government to declare him as a martyr as people shout "Kendriya Sarkar Murdabad" (Down with Central government).

The coffin is closed in the meantime and is ready for the final journey. The tricolour is back on the coffin, as the march past band of the BSF leads the way. The graveyard isn't far; it's behind the hostel. It's a hostel where he loved to stay. He would have never thought that he will be buried here.

The wreath is being laid on it and the brown coloured coffin is being moved on the shoulders of men, who are now sweating in the heat.

The grave has been dug and is ready as the body reaches the spot. Men have already gathered as the forces try to create space for the coffin. A brief pause, after which the forces pay homage to their colleague at the graveyard.

The guns are raised and fired, thrice on the command of an officer, heads are down as the body is being buried.

An officer hands over the tricolour to Tanzil's brother and says something which most of the people don't hear. Tanzil's teenage son is standing in front as the body is laid to rest. Everyone starts to put soil to fill the grave. Prayers again and people begin to leave. Only a few people stay back. Tanzil's brothers look disturbed as condolences pour in.

Dust surrounds the air as everyone leaves the graveyard. Tanzil is buried alone now in the soil from where his passion emerged.

#Pathankot Attack, #Terrorism, #NIA, #Tanzil Ahmed
The views and opinions expressed in this article are those of the authors and do not necessarily reflect the official policy or position of DailyO.in or the India Today Group. The writers are solely responsible for any claims arising out of the contents of this article.

The writer is a freelance journalist from Kashmir, who is completing his Masters degree in convergent journalism from AJK MCRC, Jamia Millia Islamia. He has been writing on human rights in Kashmir.