Taslima Nasreen writes to Sheikh Hasina: Why do you weep for Rohingyas, but not for me?

You have banished me from Bangladesh, have no sympathy for assassinated atheist bloggers, yet you have opened the doors for the foreign refugees.

You are pained by the plight of the Rohingyas. You have wept over their unfathomable misery. At a time when no country is ready to give shelter to the world’s most persecuted community, you have given them refuge.

There’s perhaps no other world leader who’s as humanitarian in their principles as you have demonstrably been. At this moment, I can only realistically compare you to the German Chancellor Angela Merkel.

As many as 40,000 Rohingyas have entered India. The Indian government has decided to deport them all. Pakistan isn’t accepting the Rohingyas. The rich Islamic countries aren’t ready to take them in either. Countries that lament the plight of Muslims are looking the other way; countries peddling Islamic fundamentalism are screaming their lungs out about the Rohingyas without welcoming any into their lands. A country as poor as Bangladesh had to step up its efforts, as a result. It had to come forward.

You have saved lakhs and lakhs of Rohingyas from drowning in the rivers they cross, or jumping into them to escape the bullets of the Burmese army, or dying of sheer starvation. There’s grapevine that you might be awarded the Nobel Peace Prize for your stellar contributions. I feel proud for you. Although it’s not the possible Nobel that I am in awe of. Many unworthy of the prize have received it. A man as inhumane and as war-crazy as Henry Kissinger, too, received the Nobel Peace Prize. A woman like Aung San Suu Kyi – who doesn’t believe in basic human rights of a persecuted people, who seems to be in denial about an ethnic cleansing happening in her own backyard – too has been awarded with the Nobel Peace Prize.

So, empty posturing with an eye on the prize, and standing unselfishly beside those poor, stateless, vulnerable men, women and children at their hapless worst – these are two different things. They are worlds apart. One is real, the other is fake.

I believe you haven’t stood beside the persecuted and unwanted human beings for the love of any prize whatsoever. Truth be told, it’s the love of fellow human beings and their goodwill that’s your biggest prize. You have the love, gratitude and prayers from the world’s most abused, homeless lot. Nobel doesn’t come close to what you have got now.

You have said since Bangladesh has been able to ensure food security for its 160 million people, it can also feed the additional 700,00 escaping from, driven out of Myanmar. You have said: “We are capable of feeding the five-six-seven lakh people who have reached our shores under extreme duress.” The wealthiest nations of the world haven’t said this, a poor country has. 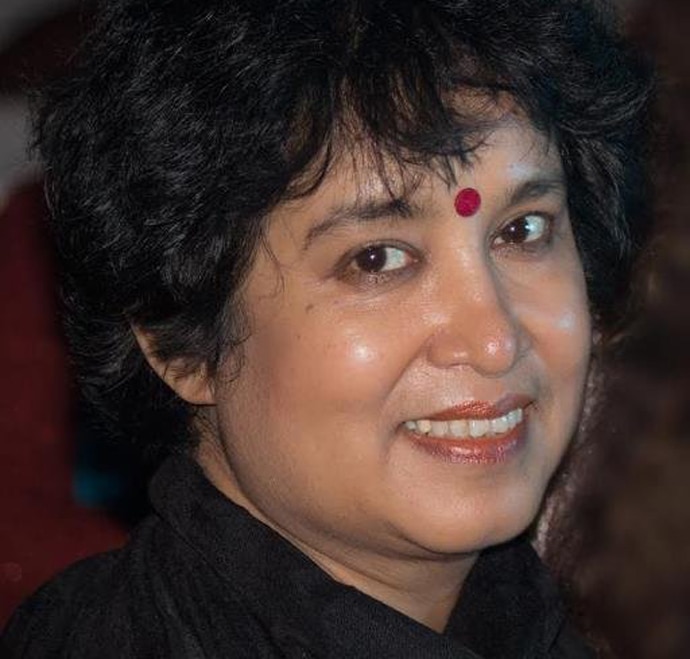 'You have banished me from my country in order to reap the votes of the Islamic majority in Bangladesh.'

A rich country can afford to extend its hand of help in times of distress, and we do expect rich nations to shoulder the responsibility when it’s needed the most. However, when a poor country like Bangladesh sends out the beacon of hope, it rises above ordinariness and touches extraordinariness. The extraordinariness of human compassion, of true humanitarian nobility, of being a poor country with a heart, a tiny nation that’s not willing to send away those escaping sure death, homeless and distraught, hungry and denuded of hope.

You have said: “We stand beside the refugees from Myanmar, and we are going to extend to them all cooperation until they are safely back in their home country, and we are there by their side.” Who else has said these simple but bold words of heartfelt courage?

Some among the Rohingyas – denied citizenship for 35 years now – are embracing Islamic fundamentalism, as per reports; so no one is willing to believe the rest. Not even Pakistan – a country birthed to give refuge to Muslims the world over – is accepting the Rohingyas as its own, is willing to let them in, and stay.

While in Bangladesh itself, the fundamentalists and their leaders are waiting with bated breath to entrap the politically vulnerable and emotionally disoriented people in their jihad. But it’s you who has assured that you wouldn’t allow anyone to ideologically capitalise on these hapless peoples, and that you would take necessary action against those who try profiteer in any way from the Rohingya refugees in Bangladesh.

You have sent across a stern message that no scattered attempts to lure the Rohingyas into ideological and violent extremism would be tolerated in your country. You have asked your citizens not to mistreat or dehumanise the refugees in any way.

Truly, you are incomparable in your selfless humanity and in your expansive, inclusive tolerance. You have embraced the uprooted Rohingyas at a time when everyone is driving them away, every country is looking the other way.

And yet here you are, Madam Prime Minister, you and only you showing everyone that a poor Muslim country can be as humanitarian, as open and embracing of those driven out of their ancestral lands, as those select European countries who too accept refugees. You have shown that a poor little Muslim country too can take in those who are battered and dehumanised, without any ulterior motive.

You have even said that if and when Myanmar takes the Rohingyas back, it should be providing them with citizenship and security. But perhaps you do know, no matter how much you try, Myanmar isn’t going to take them back, they will stay on in Bangladesh itself all their life, they will have children in the country. A huge chunk of that underprivileged community will eventually take to stealing, robbing, mugging, or selling illicit liquor or even enlisting their names in extremist organisations. This has happened in the past, this will happen all over again.

You have said that in 1975, you had to live as a political refugee in a foreign country. So you understand the pain of the refugees. But I don’t understand how you don’t understand my pain, or have never tried understanding it ever. You have reduced me to a refugee.

For 24 long years, I’m being forced to move from one country to another. I don’t have a country to call my own, no home to come back to. You have banned my books, and continue to keep them banned in Bangladesh. I have tried to give power of attorney to my sister, but even those papers are not getting signed as per your instructions to the Bangladesh high commissions abroad.

You are shedding tears for someone while you make another’s life as miserable as possible.

I have, in fact, spoken in favour of humanity and humanism for as long as I remember. Then why have you turned me into an untouchable? From which humanitarian pedestal have you closed the very doors of my country on my very face?

I don’t think you can, actually.

You had protested in the wake of Rajib Haider’s assassination. But the moment you got to know that Haider was an atheist, you fell stone silent. In Bangladesh, free thinkers were murdered brutally, one after the other, young men them all. Secular progressive bloggers were mercilessly hacked to death. You haven’t mourned in public or expressed even a sliver of grief at any of those deaths. None of those assassinations have seen justice in the court of law.

Yet, you weep for the Muslims who come from a foreign land. But no tear is shed from your eyes when the liberal, secular, talented, irreligious or atheist youths of your own country are felled most disturbingly at the altar of fundamentalism. Your eyes don’t well up, they stay dry as ever. You don’t even condemn those murders as the prime minister of Bangladesh, you stay mum as hell; your deafening silence is bathed in the blood of the murdered young writers.

Just because they happened to be atheists, do they not deserve your compassion, even in death? Your condemnation of their murders, isn’t that the least you could do for them?

Honourable Prime Minister, you forget time and again that you are as much the PM of those who are believers, who are religiously inclined, practising Muslims and others, as you happen to be the PM of those who don’t believe in god, are atheists, or just irreligious. Rich or poor, men or women, Hindu or Muslim, atheist or believer – you have a responsibility towards everybody. You are expected to, liable to, look at and treat everyone in the same manner, with the same pair of inclusive, responsible, democratic eyes. 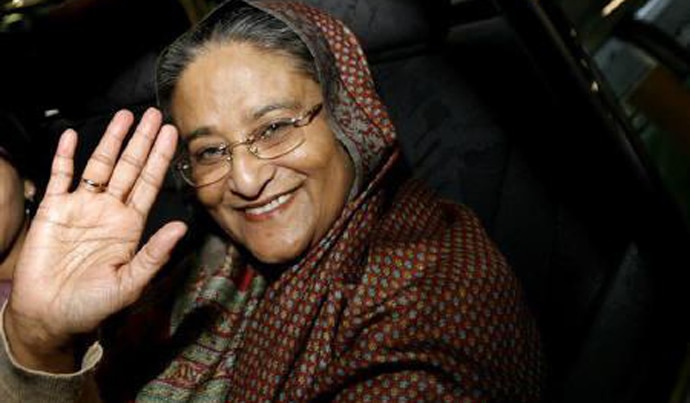 If that’s not the case, your humanism isn’t the real humanism at all. The tears in your eyes too one day will be seen as fake tears, unfortunately, because you haven’t shed them equally for everyone who’s been victimised, especially in your own country.

Some have started saying that you are doing this merely for the votes. That your large-heartedness for the Rohingyas is a cynical, vote-catching exercise; giving them refuge will endear you the country’s Muslims.

Please tell me, if the Rohingyas happened to be Hindus as well, or were Buddhists, would you still have given them succour? Perhaps, not. When the Hindus of Bangladesh themselves get persecuted, when they are uprooted from their ancestral lands, when their homes are burned down or destroyed otherwise, when they are forced to flee the country as religious refugees, why do you not weep?

Have you visited the makeshift homes of those persecuted Hindus of Bangladesh? Have you shed a single tear for them?

You have banished me from my country in order to reap the votes of the Islamic majority in Bangladesh, and you have not shown the same bigness of heart and soul towards the minorities of your own country.

You have no sympathy for the assassinated bloggers, or those still alive and striving to spread secular, progressive values through their fearless, tireless words. But here you are, swept off by sympathy for those driven out from another country, you are weeping for the Rohingya refugees. Because they are Muslims, many are certain of that.

You only want to win. You only want to rule. Those who want to hang on to power by hook or by crook, by any means possible, by manipulations and by being selfish, how do we freely and without fear or compulsion see them as true humanists?

The one who you have compelled to be a refugee for two decades and counting.

(Translated from Bangla to English by Angshukanta Chakraborty)

Also read: Why Rohingyas are easy scapegoats for Indian government

#Taslima Nasreen, #Sheikh Hasina, #Myanmar, #Bangladesh
The views and opinions expressed in this article are those of the authors and do not necessarily reflect the official policy or position of DailyO.in or the India Today Group. The writers are solely responsible for any claims arising out of the contents of this article.