How a 'caste census' of Pulwama martyrs utterly disparages their sacrifice

Do patriots have a caste, creed or colour? Most certainly not. They are Indians and their loss, more than anything else, makes us realise that truth.

Indians are still mourning the ghastly terror attack of Pulwama perpetrated by the Pakistan-based Jaish-e-Mohammad which killed 40 Indian paramilitary jawans. The anger against Pakistan, for it continues to shelter and nurture terrorist groups like Jaish-e-Mohammed, Lashkar-e-Taiba and dreaded terrorists like Masood Azhar, Hafeez Saeed and Zakiur-Rehman-Lakhvi, is still fresh.

In this grief and darkness, I was astonished when I came across an article on Twitter which claimed that most of the slain soldiers belonged to a lower caste.

Many felt the article struck a displeasing note. I actually felt disgusted after reading the piece. Much to my dismay, the writer had apparently even contacted the families of the martyrs — who currently are in agony after losing their loved ones — to inquire about the caste of the slain soldiers.

This, actually, in my point of view, distorts the sacrifice of the soldiers.

The article even tries to politicise the issue by dragging in the ruling BJP party and stating that the saffron brigade is silent about the castes of the martyrs. The article continues to argue that because Dalits are apparently not supporting the BJP, they are using the nationalism card to bring all lower and upper caste people together under one umbrella for electoral benefit.

According to me, nobody should talk about the caste of the soldiers — they are all Indians who risked their lives for the country.

Writing such a piece actually denigrates the valour of the martyrs. And relating the gruesome attack to BJP's electoral gains is even worse. Obviously, one has the right to write against the BJP — but associating the appalling terror attack with caste identity to attack the saffron party is really distasteful.

Absolutely not! They are patriots like any other community in India. India is still in shock after the terrible Pulwama attacks. (Source: Reuters)

In fact, such data doesn’t always convey reality — and could even be against the interests of our country. Who is to say data given in the article will not be used to further embolden communal agendas by such elements? Some may even use the data for propagating hate against Muslims — questioning their patriotism towards the country. Even the external enemies of the country who are trying to create divisions within India may take advantage of such so-called information.

Importantly, one shouldn’t forget that today, we are living in an era where even facts are distorted into fake news to spread a communal agenda in society. Here, in this case, those social media warriors wouldn’t face much difficulty to peddle a communal agenda as the 'data' itself provides them with fodder.

Shouldn't the author have looked into the consequences — which could potentially create more communal divisions within the country — before writing the piece?

Of course India is a democratic country and encourages freedom of speech. That doesn't mean one would use it in a manner which may go against the interests of the country and its people. Soldiers risk their lives for the safety of India and its people, irrespective of their religion. And, their sacrifice, more than anything else, makes us realise most firmly the truth — we are all Indians. 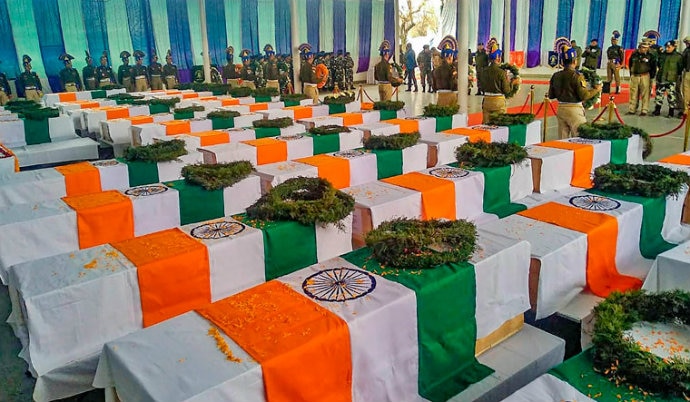 What surprises me is that those who call themselves 'secular' go on to categorise the martyrs of the Pulwama terror attack as per their caste.

Is this secularism? I don’t think so.

It would have been much better had the article — instead of talking about the caste of the martyrs — contained stories of their families. Of their childhoods. Of their loves and hopes and the human lives — and not caste groups — thus lost.

Also read: Pulwama and 2019 General Elections: Wait for the surprise

#Pulwama martyrs, #Caste Census, #CRPF, #Caravan magazine
The views and opinions expressed in this article are those of the authors and do not necessarily reflect the official policy or position of DailyO.in or the India Today Group. The writers are solely responsible for any claims arising out of the contents of this article.